With Massachusetts inching toward the coronavirus-saddled school year, educators across the state, mobilized by teachers unions, are attempting to persuade local officials to sanction completely remote returns to school.

The Massachusetts Teachers Association and the American Federation of Teachers Massachusetts, the commonwealth’s largest teachers unions, are looking to keep the pressure on school committees as districts have already begun opting for virtual learning amid the wide-ranging health and safety concerns presented by classes being held in brick-and-mortar buildings.

“We’re not willing to let the districts force us and our students and our families back into the buildings and risk everybody’s lives,” MTA President Merrie Najimy said.

The number of COVID-19 cases in the state is again on the rise. The uptick prompted Gov. Charlie Baker last week to roll back limits on outdoor gatherings — from 100 down to 50 people — and indefinitely postpone the second step of Phase 3 of the state’s reopening plan.

Educators have also become increasingly worried about the ability of school buildings — many of them in desperate need of repairs, they say — to adequately supply classrooms with fresh and ventilated air.

The state’s school systems have been underfunded for over a decade, and their buildings embody that disinvestment, according to AFT Massachusetts President Beth Kontos.

The union backed a fully remote approach to the school year last month, calling for districts to conduct building safety inspections with a mutually agreed-upon party before students and teachers return to in-person learning.

“I don’t want to know that the building is not in good condition by, ‘Are people getting sick?'” Kontos said.

In July, the MTA aligned under a similar stance, stating members will not return to their classrooms until districts can meet certain criteria, including demonstrating that school facilities are safe to hold classes.

Boston Teachers Union President Jessica Tang, in a statement last week, rejected Boston Public Schools’ option for a mix of remote and in-person learning to start the coming school year, calling for “a phased-in return to any in-person learning only when all safety protocols are in place and verified.”

Some districts lack functioning sinks and faucets, not to mention bathrooms have not always been readily stocked with hand towels and toilet paper, union leaders say.

And educators have other concerns around teachers and staffers at high-risk for COVID-19, testing and contract tracing abilities, personal protective equipment supplies, mask-wearing rules, and physical-distancing protocols. While unions and the U.S. Centers for Disease Control and Prevention have called for a minimum of six feet of space between individuals, state guidance allows schools to operate with only three feet.

Najimy said the MTA wants state leaders to identify public health benchmarks that will guide schools for reopenings and closures — metrics that will help communities know the virus is under control.

What statistics officials should look for exactly should be decided by state leaders, not teachers, she said.

“These are things all of the medical experts and scientists are calling for,” Najimy told Boston.com. “They have been calling for this for the last two to three weeks. What we’re saying is, ‘We will resume learning, but starting remotely.'”

The MTA has been asking its local teachers unions to back its position and advocate for it at the local level, namely to school committee members. As of Aug. 5, about 71 percent of the affiliates had signed on in support, according to Najimy.

In Boston, the BTU is amidst a four-day series of actions centered around forcing city and school officials to pick up the union’s proposal for a remote start. Members intend to drop off the proposal at City Hall themselves on Thursday, at the end of a car caravan from Roxbury.

The unions say the messaging has already been successful in some areas.

Najimy, speaking last week, pointed to several districts that have already opted to go remote, including Somerville and Framingham, even before they were required to submit final plans to the state. (The deadline was initially Monday but was subsequently pushed to Friday.)

“The reality is parents and educators share the same fears about sending everyone back to the buildings,” Najimy said.

If parents won’t send their children back, then school committees “will be hard pressed,” she added.

Late last month, the national leadership of the AFT, a union boasting 1.7 million members, issued a resolution affirming the union will support any local chapter that decides to go on strike over reopening plans. The group also offered legal and financial resources to help educators figure out how they will get back to the classroom.

Legal support, communications support, and staffing will be provided to chapters that vote to strike — a “last resort” measure, according to the AFT.

The offering was primarily intended for members in parts of the country that are now coronavirus hotspots, Kontos said. In Florida last month, the AFT backed its affiliate, the Florida Education Association, in a lawsuit filed against state leaders that’s aimed at stopping “the reckless and unsafe reopening of public school campuses as coronavirus infections surge statewide,” the AFT said.

Massachusetts unions have not put such drastic measures on the table, however. And teacher strikes in the Bay State have historically been few and far between, according to Eve Weinbaum, an associate professor of sociology at the UMass Amherst Labor Center.

“I think all of the unions are considering what to do if the districts are requiring them to be back in the classroom,” Weinbaum said. “But I also think (a strike is) unlikely to happen in Massachusetts.”

Baker, on Friday, raised concerns of his own about the impact of remote-only learning on students, especially for those learning to read.

He said he doesn’t believe the data supports making schools remote across the entire state, and emphasized the importance for communities to look at their own COVID-19 metrics.

Many parts of Massachusetts are in “very good shape” in terms of the rate of infection, Baker added.

“If you look at the data across most communities in Massachusetts, there’s plenty of opportunity there based on the science and what we know for them to consider reopening in some way, in person,” the governor said. “And I really do worry about kids who are going to be dealing with classmates they don’t know, if they’re full remote, and with teachers that they don’t know and with teachers who don’t know them.”

But Najimy, speaking in an interview before Baker’s remarks, said she is confident school committees will come around “and actually take responsibility to keep everybody safe.”

The MTA, AFT Massachusetts, and the BTU also reached an agreement with the state Department of Elementary and Secondary Education in July to allow districts to reduce the school year for students by 10 days. That time will give teachers and staff the opportunity to plan for what’s sure to be an unusual school year.

“We will not send students or teachers or staff into a building that is not safe,” he said.

Kontos noted many locally elected school officials understand the union’s concerns. They’re often parents themselves, or have had careers in education, and the calls for remote learning aren’t coming from the unions alone, she said.

The pressure educators are raising comes from a place of care, Kontos said. Teachers the world over have only ever wanted children to learn and be well. 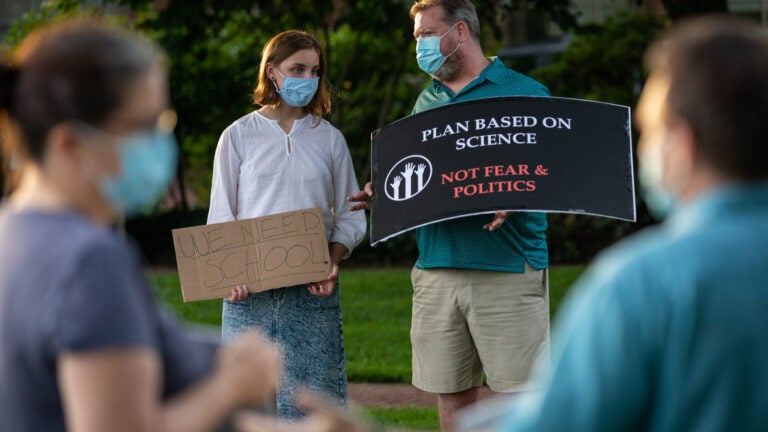