During a press conference Wednesday morning, Gov. Charlie Baker emphasized that Massachusetts communities with a high number of COVID-19 cases relative to their population should remain “vigilant” to stop the spread of the infectious and potentially deadly disease.

But he also suggested that some had overreacted — at least when it comes to school reopening.

While some cities and towns have consistently been in the red category indicating dangerously high coronavirus levels, Baker said his administration was “urging” communities against changing course on “major decisions like schools right away” based on their designation in the state’s color-coded map.

“Sometimes communities bump up for one very particular reason,” Baker said, such as a “brief outbreak in a nursing home” or a cluster of cases from a private gathering.

But the governor suggested that the state’s contact tracing initiative should be able to handle such events. And he stressed that local officials should only shift schools to an entirely remote learning model after “three weeks of data.”

“People shouldn’t be making decisions on this stuff based on one week,” Baker said.

Last week, officials in towns like Dedham and Monson delayed the beginning of in-person classes for the entire school district after a few small clusters pushed their coronavirus prevalence rate above 8 cases per 100,000 residents, which is the threshold for the red category.

However, some local officials have argued that the color-coded map isn’t as meaningful for smaller communities, where just a few cases can push them into the red zone. For example, even after an isolated cluster among staff at a local restaurant elevated Chatham into the red zone, the 6,000-person town’s superintendent refused to delay in-person classes on the basis that the community would drop back into a lower-risk category within two weeks.

Baker suggested Wednesday that he agreed with that approach.

“There are communities that bounce up and bounce down,” he said. “And in many cases, it’s because of a single event or a single institution that creates that, and that’s why we think it’s really important for people to look for trends. And trends don’t happen in seven days; trends happen over the course of three weeks worth of reporting, which represents four weeks worth of data.”

Baker said that remote-only learning models “should only be used for communities with three consistent weeks of red designations, unless there are extenuating circumstances.”

The guidance comes after the Massachusetts Teacher Association accused the Baker administration of “seeking to bully communities into adopting more in-person learning,” after the governor’s top education official sent a letter to 16 districts in the lowest-risk categories that have begun the academic year with remote-only learning models. The letter asked for a timeline for when the districts planned to resume in-person classes and warned their response could trigger a state audit of their plans.

Given the evidence that there is “little or no transmission of COVID-19 in those communities,” Baker said Wednesday that public health and development experts say it should be safe to return students to class under the state’s social distancing, face covering, and hygiene guidelines. As the Washington Post reported Wednesday, researchers say there is little evidence that COVID-19 is spreading inside school buildings since they began reopening across the country last month — at least so far.

“Local officials run their local schools,” Baker said. “We understand that. But the state has an obligation to ensure that local officials are providing the best possible education in these difficult circumstances.” 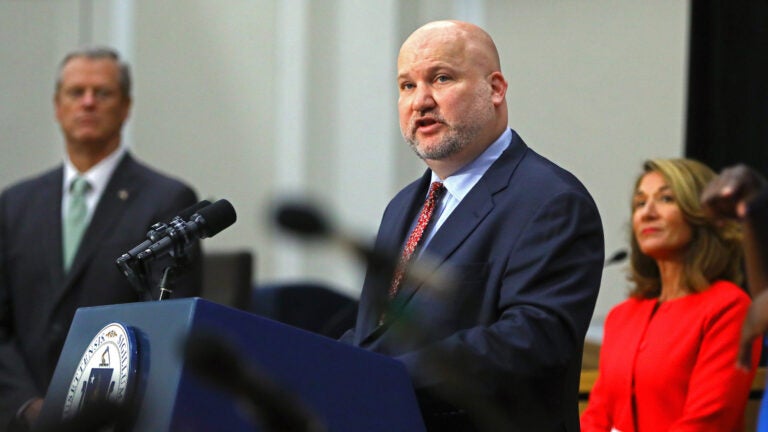