After over a year learning in a mix of remote and in-person classrooms, Massachusetts high school students are returning to life as usual on May 17 when schools across the state reopen fully. Many students and their families are eager to leave pandemic schooling in the rearview mirror, but with the school year being nearly over, some are asking, “What’s the point?”

With just a month between the May 17 return date and the last day of school on June 18, we wanted to know what Boston.com readers thought about this quick turnaround, and it turns out they are split down the middle on the issue. Whether they were in support of the reopening or not, though, they felt very strongly about their position.

Of the 581 people who responded to the survey, 51 percent said they agreed with the state’s plan to reopen schools on May 17 and 50 percent disagreed.

“Why waste everyone’s time with a month left? What do we hope to accomplish by this? The year is already gone, the students won’t learn anything, but will be disrupted with routines,” said Lisa from Boston, “They should spend the time to be 100% ready to start school in the fall. I would love to see them start the day after Labor Day and get going strong.”

Pfizer’s COVID-19 vaccine could be authorized for young adults age 12 and older by the U.S. Food and Drug Administration within the week, and some of the parents who wrote in against the reopening plan said they worry students won’t be fully vaccinated before the end of the school year.

When the announcement was made that schools would be reopening in May, state Education Commissioner Jeff Riley cited the negative mental health impacts remote learning has had on students. Some of our readers highlighted the same issues.

“It’s a good move. Parents have the option of keeping their kids remote, so it’s really a no lose situation,” said Al of Topsfield. “The educational benefit will be pretty slim, but any social-emotional benefit is worth it for those who come back.” Another reader said, “Starts the psychological recovery from the pandemic 3-4 months sooner.”

Education Secretary James Peyser said in a statement that bringing back high school students now we will put them in a “stronger position to start school in the fall,” and several of our respondents agreed.

“Treat it as a dry-run for the fall. If it works, great. If it doesn’t, schools should be able to revert back, and figure what to fix for the fall,” said Bob of Concord.

We also heard from several teachers and school staff members who felt less than optimistic about the academic benefits of returning to school with such little time left in the academic calendar.

Sara, a resident of Boston and a teacher outside the Boston Public School district said she’s worried reopening schools now will only add stress to students’ lives, “This does not make sense. Buildings still aren’t safe enough. My students are 1 foot apart in class and this also is stressing out students. Mask rules aren’t being followed and it’s very scary.”

“This decision is ridiculous and after working 24 years in public schools anyone knows that making people transition AGAIN in mid May is asinine,” said another reader. “This comes from people who are not teachers or students. The school year is over for high school students. Let them finish what they have with integrity. It is not like the state did anything to rehab or improve our schools while we were gone from our public schools.”

Ahead, readers shared their thoughts about school reopening — here’s some of what they had to say.

Comments have been edited for length and clarity.

“This isolation of no in-person schooling is causing more damage with social anxiety and feeding into depression. We need to have proper structure as a society.  There is a time and place for everything and now is the time to lean into and embrace going back to school!” — Suzy C., Georgetown

“Frankly, they never should have stayed closed last fall.  The private schools have all been doing great. The schools in other states have all been doing great. Massachusetts’s decision to keep public schools closed as long as possible has only served to widen the already significant gap between the affluent families and those less fortunate, including many minority/underserved families.” — Kat, Woburn

“Schools should’ve been open in August. Please explain to me why schools in the South were able to fully reopen, many with no masks on children, yet MA schools refused to reopen. This must be the smartest virus known to man if it can distinguish where to infect persons based on geography.”

“I have two kids in college going to classes. No issues. Most parents think school should have been opened for a long time. Hopkinton had started planning for it in December. Absurd it took until after April vacation to open. It should have been earlier.” — James, Hopkinton

“All kids and staff need to have a normal schedule prior to the summer so that there is absolutely no doubt in anyone’s mind that the fall school schedule will be normal.  Many other states and some cities and towns in Massachusetts have done a better job than others. But make no mistake, Massachusetts should have been a leader in getting our kids back into school much sooner.”

No, wait until the fall

“The risk of unmasked transmission outside is not zero, nor is classroom transmission risk zero, nor have we reached herd immunity, nor are the long-term effects of childhood contraction understood, nor do children live in isolation pods (but with other, often more susceptible, family members). This guidance means more people will die, even if only a few in MA. How is that worth an extra month of a fumbling return to school at the very end of this year?” — Jocelyn, Ayer

“Why, before we’ve achieved herd immunity, would you create a petri dish of young, possibly asymptomatic people who spread COVID-19 to others without knowing it. Not to mention that there’s a surge going on around the nation of younger people being hospitalized for COVID-19 symptoms.”

“My child won’t be vaccinated by the required date. Is the state assuming the risk of my child getting sick and dying?  — Daniel, Cambridge

“Bringing them back for a single month of classes, which is what they’ll be getting if they come back in mid-May, is pointless. The entire month will be spent readjusting to the environment. At this point we should put it off until next school year.” — Shirley, Dorchester

“1. Upending the kids schedules again is just going to cause more anxiety and stress for the teachers, kids, and parents. 2. The infrastructure is in place to just finish out the year, don’t fix what isn’t broken. 3. As far as I’ve witnessed it is only not working as well as it should due to an administration that doesn’t understand/fears technology. The ways today’s youth communicate are perfectly in alignment with remote school. My high school freshman agrees and has been frustrated by this.” 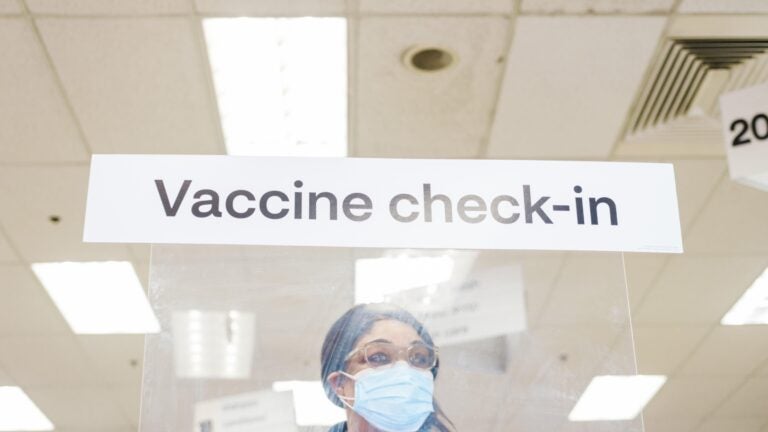