A history assignment for a Cambridge Rindge and Latin School freshman that prompted students to list the “positive effects of imperialism” went viral on Tuesday after the student’s older sister, a local political activist, posted the worksheet on Twitter.

Calla Walsh, a high school senior, shared her younger sister’s homework. The assignment required students to read about the colonization of Africa and then list the “positive effects” and the “negative effects” of imperialism.

Walsh posted a photo of the worksheet and condemned it, writing, “forcing students into the mental exercise of justifying/rationalizing genocide because of its supposed ‘positive effects’ itself perpetuates genocide and indoctrinates them into supporting an imperial war machine.”

Walsh went on to note the assignment came from “a public high school in one of the most ‘progressive’ cities in the US — Cambridge, MA.”

“It’s not just Republicans banning (critical race theory) that are revising history — racist, imperialist revisionism is a key objective of the *entire* US education system,” she wrote.

The tweet thread quickly blew up online. As of Wednesday morning, the initial post had more than 200,000 likes and over 18,700 retweets.

Walsh, an outspoken activist, has become a prolific voice for young progressive thought in Boston’s online political sphere in recent years, particularly as Generation Z makes its impact on the region’s politics. She boasts over 17,000 followers on Twitter.

Many who weighed in on the assignment backed Walsh’s line of thinking, although others wrote the exercise may have been intended to have students consider different perspectives as an exercise in critical thinking.

“Isn’t it possible to list out positive effects of imperialism while not endorsing it and recognizing the overwhelming negative effects?” one person wrote. “How else would we understand why imperialism happens in the first place?”

Walsh’s 15-year-old sister, Cece, wrote on the assignment: “I think that asking us to identify positives of imperialism, something that killed thousands and contributed to slavery, is extremely undermining and disrespectful to people whose ancestors were murdered because of colonization.”

Cece Walsh told The Boston Globe on Tuesday she was upset by the assignment because the reading appeared to soften the seriousness of the murder of African people and the theft of their land and other resources. The reading provided included phrases that said the European colonists “obtained land” or “took control,” she said.

“It was very biased, and it didn’t really give us the truth,” she said. “The positive effects are often only positive for the oppressors.”

Cece Walsh also told the newspaper she brought her concerns to her teacher, who agreed and said the text was part of the state’s curriculum. He does, however, plan to give students other reading assignments with different perspectives as the unit continues, he told her.

Cambridge Public Schools, in a statement to Boston.com on Wednesday morning, said the activity was a “note taking exercise as students read through a chapter in the Age of Imperialism unit designed to spark a conversation and to teach students how to critically think about how imperialism is written about.”

“It is important that our students learn about varying perspectives so that they can form their own opinions,” officials said.

Calla Walsh “is not a Cambridge Rindge and Latin School student,” the statement continued. Officials added she “did not have firsthand knowledge of the context of the lesson nor the class discussion.”

In our effort to teach from a holistic perspective, we endeavor to analyze historical events from as many perspectives as possible in order to better understand the impact and implications of world events on affected people. While the textbook predates the 2018 Department of Elementary and Secondary Education’s History and Social Science standards, it is used along with a broad range of resources, including materials from Facing History and Ourselves and Brown University’s Choices program. The curriculum is aligned with DESE instructional standards.

The activity was a note taking exercise as students read through a chapter in the Age of Imperialism unit designed to spark a conversation and to teach students how to critically think about how imperialism is written about. It is important that our students learn about varying perspectives so that they can form their own opinions.

The individual who shared the partial image of the assignment is not a Cambridge Rindge and Latin School students. They did not have firsthand knowledge of the context of the lesson nor the class discussion.

Calla Walsh responded on Twitter, writing: “I wish I had Twitter in second grade so I could have exposed (Cambridge schools) for making us dress up in racist costumes of Indigenous people and sing the notoriously racist song, ‘I’m an Indian.'”

The song was part of a performance of “Peter Pan,” she wrote. (Disney’s production of the children’s story includes a musical number titled, “What Makes the Red Man Red?” Calla Walsh included a screenshot of a Wikipedia webpage describing the song, “I’m an Indian Too,” from the 1946 Irving Berlin musical, “Annie Get Your Gun.”)

“I wonder if they would have used the same excuse that it ‘sparks a conversation,'” she wrote. 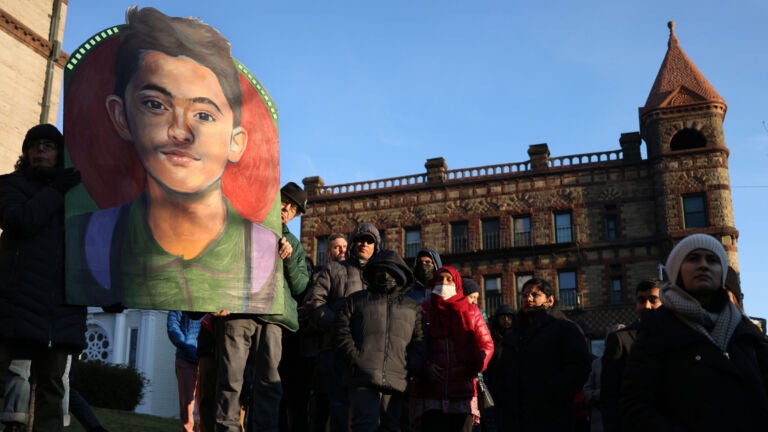 Hundreds are demanding answers after Cambridge police shot and killed a college student. What we know.