Can you fly an iPhone to the stars?

In an attempt to leapfrog the planets and vault into the interstellar age, a bevy of scientists and other luminaries from Silicon Valley and beyond, led by Yuri Milner, a Russian philanthropist and Internet entrepreneur, announced a plan on Tuesday to send a fleet of robots no bigger than iPhones to Alpha Centauri, the nearest star system, 4.37 light-years away.

If it all worked out — a cosmically big “if” that would occur decades and perhaps $10 billion from now — a rocket would deliver a “mother ship” carrying a thousand or so small probes to space. Once in orbit, the probes would unfold thin sails and then, propelled by powerful laser beams from Earth, set off one by one like a flock of migrating butterflies across the universe.

Within two minutes, the probes would be more than 600,000 miles from home — as far as the lasers could maintain a tight beam — and moving at a fifth of the speed of light. But it would still take 20 years for them to get to Alpha Centauri. Those that survived would zip past the stars, making measurements and beaming pictures back to Earth.

Much of this plan is probably half a lifetime away. Milner and his colleagues estimate that it could take 20 years to get the mission off the ground and into the heavens, 20 years to get to Alpha Centauri and another four years for the word from outer space to come home. And there is still the matter of attracting billions of dollars to pay for it.

“I think you and I will be happy to see the launch,” Milner, 54, said in an interview, adding that progress in medicine and longevity would determine whether he would live to see the results.

“We came to the conclusion it can be done: interstellar travel,” Milner said. He announced the project, called Breakthrough Starshot, in a news conference in New York on Tuesday, 55 years after Yuri Gagarin — for whom Milner is named — became the first human in space.

The English cosmologist and author Stephen Hawking is one of three members of the board of directors for the mission, along with Milner and Mark Zuckerberg, the Facebook founder.

“What makes human beings unique?” Hawking asked. He went on to say, “I believe that what makes us unique is transcending our limits.”

Hawking added, “Today we commit to the next great leap in the cosmos, because we are human and our nature is to fly.”

The project will be directed by Pete Worden, a former director of NASA’s Ames Research Center. He has a prominent cast of advisers, including the Harvard astronomer Avi Loeb as chairman; the British astronomer royal Martin Rees; the Nobel Prize-winning astronomer Saul Perlmutter, of the University of California, Berkeley; Ann Druyan, an executive producer of the TV miniseries “Cosmos: A Spacetime Odyssey” and the widow of Carl Sagan; and the mathematician and author Freeman Dyson, of the Institute for Advanced Study in Princeton, New Jersey.

“There are about 20 key challenges we are asking the world’s scientific experts to help us with — and we are willing to financially support their work,” Worden said in an email.

A detailed technical description of the project will appear on the project’s website.

Estimating that the project could cost $5 billion to $10 billion, Milner is initially investing $100 million for research and development. He said he was hoping to lure other investors, especially from international sources. Both NASA and the European Space Agency have been briefed on the project, Worden said.

Most of that money would go toward a giant laser array, which could be used to repeatedly send probes toward any star (as long as the senders were not looking for return mail anytime soon) or around the solar system, perhaps to fly through the ice plumes of Saturn’s moon Enceladus, which might contain microbes — tiny forms of life.

In a sense, the start of this space project reflects the make-it-break-it mode of Silicon Valley. Rather than send one big, expensive spacecraft on a journey of years, send thousands of cheap ones. If some break or collide with space junk, others can take their place.

Interstellar travel is a daunting and humbling notion, but Alpha Centauri is an alluring target for such a trip: It is the closest star system to our own, and there might be planets in the system. The system, which looks to the naked eye like one star, consists of three: Alpha Centauri A and Alpha Centauri B, which circle each other, and Proxima Centauri, which may be circling the other two. In recent years, astronomers have amassed data suggesting the possibility of an Earth-size planet orbiting Alpha Centauri B.

It would take Voyager 1, humanity’s most distant space probe, more than 70,000 years to reach Alpha Centauri if it were headed in that direction, which it is not.

Over the years, a variety of propulsion plans have been hatched to cross the void more quickly. In 1962, shortly after lasers had been invented, Robert Forward, a physicist and science fiction author, suggested that they could be used to push sails in space.

In 2011, DARPA, the Defense Advanced Research Projects Agency, got into the act with 100 Year Starship, a contest to develop a business plan for interstellar travel.

By all accounts, Milner was initially skeptical of an interstellar probe. But three trends seemingly unrelated to space travel — advances in nanotechnology and lasers and the relentless march of Moore’s Law, making circuits ever smaller and more powerful — have converged in what he called “a surprising way.”

It is now possible to fit the entire probe with computers, cameras and electrical power, a package with a mass of only one gram, a thirtieth of an ounce.

That, Loeb said, is about what the guts of an iPhone, stripped of its packaging and displays, amount to.

Power would come from a tiny radioactive source like americium, the element in smoke detectors. Propulsion would come from foil sails that would unfold to catch laser light.

The laser is the most intimidating and expensive of the challenges. It would have to generate 100 gigawatts of power for the 2 minutes needed to accelerate the butterfly probes to a fifth of the speed of light (subjecting its tiny innards to 60,000 times the force of normal gravity, by the way). That is about as much energy as it takes for a space shuttle to lift off, Loeb said, and about 100 times the output of a typical nuclear power plant.

To achieve that energy would require an array about a mile across combining thousands of lasers firing in perfect unison.

Moreover, to keep the beam tightly focused on one probe at a time would require an adaptive optics system that compensated for atmospheric turbulence — something astronomers know how to do over a span of 10 meters, the size of a big telescope mirror now, but not over a mile.

Posing another challenge is the design of the sails, which would have to be very thin and able to reflect the laser light without absorbing any of its energy. Absorbing as little as one part in 100,000 of the laser energy would vaporize the sail.

Another challenge might simply be to the imagination. Nobody knows what the Starshot fleet might find out.

“Looking is very different from going and visiting,” Loeb said.

As he noted, referring to recent physics experiments, “Nature teaches us that its imagination is better than ours.” 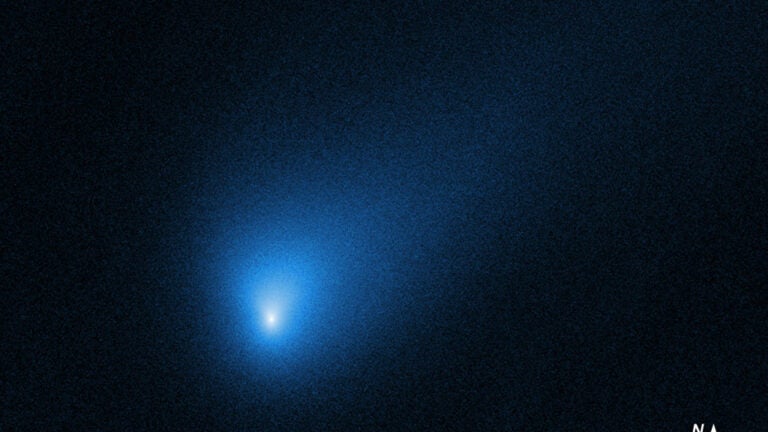