The continental United States will experience a total solar eclipse for the first time in 38 years on Monday.

A total solar eclipse occurs when the moon, traveling between Earth and the sun, aligns to completely cover the sun, leaving only its atmosphere, or corona, to be seen.

A diagram showing how a total solar eclipse occurs.

Inside the 70-mile-wide path of totality—stretching from Oregon to South Carolina—the sun will be entirely covered, leaving towns in darkness for a minute or two, said Jay Pasachoff, a Williams College astronomy professor and long-time eclipse chaser.

What you can see in Boston

According to a map published by NASA, 63 percent of the sun will be covered in Boston. The sky will not look darker and the air won’t feel cooler, but the sun will still take on a crescent shape, said Talia Sepersky, planetarium coordinator at the Museum of Science’s Charles Hayden Planetarium.

“If you’re not looking up, you probably won’t notice anything,” she said.

One way to view the eclipse is with a pair of eclipse glasses. The specially-made glasses darken the sun to the average brightness of the full moon. Without them, looking directly into the sun can cause permanent retina damage or even blindness.

The sun will be most covered at 2:47 p.m. in Boston, according to an interactive animation from Vox. The moon will begin passing in front of the sun at 1:28 p.m., and the sun will appear spherical again by 4 p.m.

Seeing the eclipse, however, relies on the weather. If clouds cover the sun, there will be nothing to see.

“You have to actually be able to see the sun’s disk,” Sepersky said.

Four Boston Public Library branches (the Central Library’s courtyard, Adams Street, Mattapan, and South End) and the Boston Children’s Museum will be distributing eclipse glasses for free, along with many other community organizations. The glasses are very limited and on a first-come, first-serve basis at the library branches at 2 p.m.

At the Central Library in Copley Square, there will also be activities for kids to learn about the science behind eclipses and watch livestreams of the total eclipse in other parts of the country.

Other local viewing events include an on-campus viewing at MIT with two sun-safe telescopes and a lunch party at Henrietta’s Table.

Another way to see the change in the sun’s shape is through projection. One method is to create a pinhole camera, but any object with holes will project the sun’s crescent shape.

What you can see online

The internet will allow people all over the world to watch the total eclipse live. According to a statement, NASA will be showing four livestreams that include live footage from ground and space telescopes, watch events across the country, and interviews with scientists.

Another option is the footage from 57 balloons that will be launched across the country to film the eclipse from space. The project, led by a team from Montana State University, will be the first to create aerial recordings of an entire eclipse.

“What we’re trying to do is provide a different perspective,” said Angela des Jardins, principal investigator of the Eclipse Ballooning Project. “A perspective that will hopefully get people to pause and go, ‘Whoa, I’m looking down on the Earth, and that’s the shadow of the moon darkening the Earth.’”

Where you can go to see more

According to this interactive map by Vox, the closest town inside the zone of totality is Turbeville, South Carolina, 752 miles southwest of Boston. It’s a long trip for an event that lasts two or three minutes, but Pasachoff explained how even a partial eclipse with 99 percent of the sun covered can’t compare to a total eclipse.

Many towns within the zone of totality will be holding watch events and expecting visitors.

“It’s really an amazing opportunity … instead of hiding behind our TVs like the [1979 eclipse], it’s a time to just pause and as an entire nation be like ‘Wow, that is cool!’” des Jardins said. 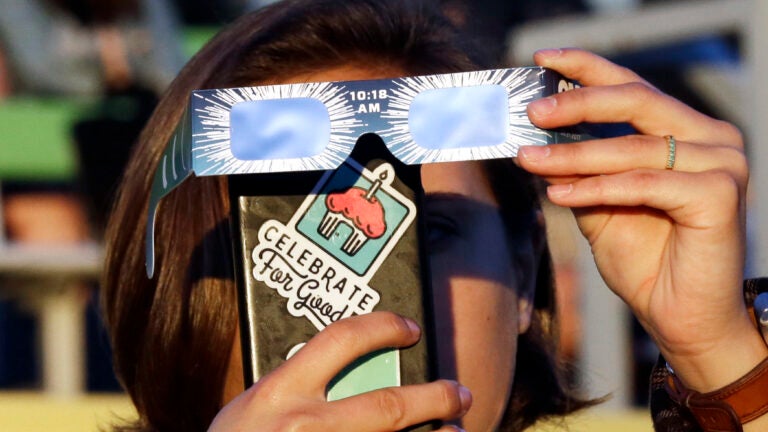