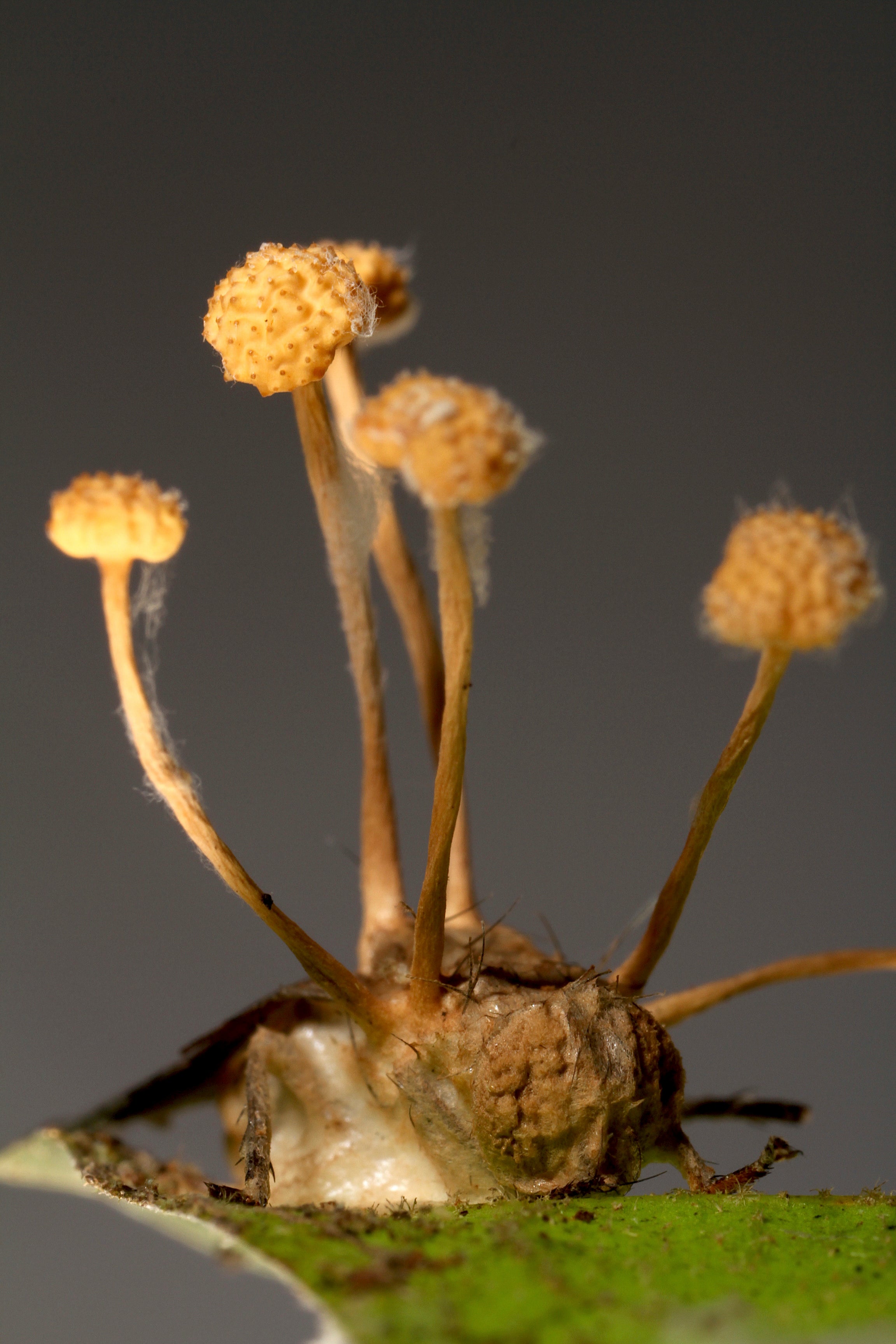 An Ophiocordyceps dipterigina species of fungi on a fly in the Adolfo Ducke Forest Reserve in Brazil.

On Oct. 24, a team of researchers reported an important new insight into the origin of zombies — in this case, ants zombified by a fungus.

Here’s how it works: Sometimes an ant, marching about its business outdoors, will step on a fungal spore. It sticks to the ant’s body and slips a fungal cell inside.

The fungus, called Ophiocordyceps, feeds on the ant from within and multiplies into new cells. But you wouldn’t know it, because the ant goes on with its life, foraging for food to bring back to the nest. All the while, the fungus keeps growing until it makes up nearly half of the ant’s body mass.

When Ophiocordyceps is finished feeding on its host, the fungal cells gather inside the ant’s body. They form a mat and push needlelike projections into the ant’s muscle cells. The fungal cells also send chemical signals to the ant’s brain, causing the host to do something strange. The ant departs its nest and climbs a nearby plant.

In the tropics, where many species of Ophiocordyceps live, the fungus drives ants upward, to a leaf above the ground. The ant bites down, its jaws locking as it dies.

The fungus sends out sticky threads that glue the corpse to the leaf. And now it is ready to take the next step in its life cycle: Out of the ant’s head bursts a giant stalk, which showers spores onto the ant trails below. “The ants are walking over a minefield,” said David Hughes, an expert on Ophiocordyceps at The Pennsylvania State University.

Naturalists published their first accounts of Ophiocordyceps well more than a century ago. But only in recent years have researchers probed how these fungi go about zombifying ants.

As it turns out, it is an exquisitely intricate process that leaves researchers with many questions yet to answer. Scientists don’t even know what chemical gets into the host’s brain and causes it to leave the nest and climb.

“We still haven’t found the smoking gun,” Hughes said.In 2010, Hughes and his colleagues identified a 48 million-year-old fossil of a zombie ant with a death grip on a leaf. The fossil demonstrated that zombifying fungi have been around a long time. But it didn’t offer any hints as to how the fungus evolved from its ordinary ancestors.

“You think, ‘Where the hell did that come from?’ ” Hughes said.

He suspected an answer might be lurking in the diversity of living fungi. But before the age of DNA sequencing, researchers struggled to classify Ophiocordyceps.

In 2013, one of Hughes’ graduate students, João Araújo, began sequencing the DNA of fungi in scientific collections. He also went on expeditions of his own, turning over leaves to find zombified ants. If they were a species he hadn’t seen before, Araújo photographed them and pried off the tiny bodies to bring home.

What was once thought to be one species of fungus now turns out to be at least 28. Each zombifies a different species of ants or attacks other insects.

These species all belong to a much bigger group of fungi. Many of their relatives feed on dead plants, while some infect insects — mostly a group called hemipterans, which includes aphids and cicadas.

Araújo, now a research fellow at University of the Ryukyus in Japan, analyzed the DNA of more than 600 of these related species. Comparing the genetic sequences, he was able to draw a fungal family tree.

The tree revealed that all Ophiocordyceps species descend from a common ancestor. But that ancestor did not infect a hemipteran. Instead, the scientists concluded, it started out infecting the larvae of beetles.

The beetles infected by the fungi live in rotting logs. When the beetle eggs hatch, the larvae crawl around alone inside the log, chewing on wood.

Charissa de Bekker, an integrative biologist at the University of Central Florida who was not involved in the new study, said it was intriguing that Ophiocordyceps’ ancestors choose such a host.

If a beetle larva makes contact with a spore, it invades the insect’s body and feeds on its muscle. The beetle dies without any zombie drama.

The fungus grows its stalk and spreads spores around the dead body. Other larvae crawling inside the log are then infected.

Araújo and Hughes hypothesize that millions of years ago, the fungi sometimes got picked up by ants that also lived in logs. In their new ant hosts, the fungus already had the ability to feed on muscles, grow stalks and spread.

But ants also presented the parasite with a major challenge. Unlike solitary beetles, ants live in crowded nests. Diseases can wipe out an entire colony, so the ants ruthlessly attack any individuals that show signs of sickness. “They kick them out of the nest, or they kill them and rip them apart,” Araújo said.

As a result, Ophiocordyceps could not spread the way it had in beetles, simply by killing its host and sending out spores.

Natural selection must have favored fungi that could keep ant hosts healthy as they were parasitized. When the fungi were ready to leave the ant’s body, they had to get it out of the nest alive. It became necessary to zombify the ant, to make it do a few things it wouldn’t ordinarily do.

By climbing a nearby plant, the dying ants could infect new ants, too. Ophiocordyceps “had to develop a way to make the host leave the nest, but not so far, because they still had to shoot spores and infect new hosts,” Araújo said.

The fungi’s transition to ants set off an evolutionary explosion. Once Ophiocordyceps had evolved to live in one species of ant, it began hopping to new species.

De Bekker said that knowing the evolution of Ophiocordyceps may help scientists figure out which genes various species use to transform ants into zombies.

“The behavior is very complex, so it’s not going to be one gene that’s responsible,” she said. “This study is helping us know what comparison we should be making.”

The new study also indicates that the fungus jumped into ants in the tropics. Over the course of millions of years, it then spread toward the poles. As the fungus moved to new homes, it faced new challenges.

Zombie ants couldn’t bite down on leaves anymore, because they fell off in fall, before the fungi were done spreading to new hosts. Infected ants began hugging twigs instead.

Hughes predicts the first zombified ants lived in decaying wood in small colonies, and the infected ants barely got out of their nests before dying.

It’s even possible that some fungi belonging to this early lineage are still manipulating ants today. Hughes and Araújo suspect there are hundreds of other species of Ophiocordyceps still to be discovered.

“Every time I go to the same reserve, I still find new species,” Araújo said. “I think describing new species will be a never-ending job for generations.”