A small robotic helicopter named Ingenuity made space exploration history Monday when it lifted off the surface of Mars and hovered in the wispy air of the red planet. It was the first machine from Earth ever to fly like an airplane or a helicopter on another world.

“We together flew at Mars,” MiMi Aung, the project manager for Ingenuity, said to her team during the celebration. “And we together now have this Wright brothers moment.”

Like the first flight of an airplane by Wilbur and Orville Wright in 1903, the flight did not go far or last long, but it showed what could be done. Flying in the thin atmosphere of Mars was a particularly tricky technical endeavor, on the edge of impossible because there is almost no air to push against. NASA engineers employed ultralight materials, fast-spinning blades and high-powered computer processing to get Ingenuity off the ground and keep it from veering off and crashing.

Witness the historic moment in full. The Mastcam-Z cameras on @NASAPersevere show us the takeoff, hovering and landing of the #MarsHelicopter. pic.twitter.com/ypdIWmC4D1

And just as the Wright plane led to a transformation in how people and goods zip around Earth, Ingenuity offers a new mode of transportation that NASA can now use as it studies the solar system’s mysteries. Future robotic explorers, with this technology under the agency’s belt may take new, unconventional shapes.

“What the Ingenuity team has done,” said Michael Watkins, the director of NASA’s Jet Propulsion Laboratory where the helicopter was built, during a news conference, “is given us the third dimension. They freed us from the surface now and forever in planetary exploration.”

Ingenuity was also something different for NASA — a high-risk, high-reward project with a modest price tag where failure was an acceptable outcome.

That approach is more similar to that of nimble space companies like SpaceX than large traditional development programs that work through every possible contingency to build a full-scale machine that has to work the first time.

Ingenuity was thus a small experiment tacked onto NASA’s Mars rover, Perseverance, but it has the potential for a paradigm-breaking advance.

Perhaps a more advanced helicopter could serve as a scout for a future rover, identifying intriguing locations for closer study and safe routes for the rover to drive there. Or swarms of helicopters could zip up and down cliff faces to examine layers of rock that are too far away or out of view of current spacecraft.

There are no current plans to put a second helicopter on Mars. But Bob Balaram, the chief engineer of Ingenuity, said he and colleagues had begun sketching out designs for a larger Mars helicopter with about 10 times the mass and capable of carrying some 10 pounds of science equipment.

“That would be, I think, the good sweet spot for the next-generation design,” Balaram said.

On Sunday, mission controllers at NASA’s Jet Propulsion Laboratory in California radioed the commands for the test to Perseverance, which landed on Mars in February. Perseverance in turn relayed the commands to Ingenuity, which was sitting 200 feet away on flat terrain that was chosen to serve as the airstrip for a series of five test flights.

At 3:34 a.m. Eastern time — it was the middle of the Martian day, half an hour past noon — the helicopter spun up its rotors as it had been commanded and rose above Jezero crater, into the Martian sky.

At the surface of Mars, the atmosphere is just 1/100th as dense as Earth’s, not much for helicopter blades to push against. Thus, to generate enough lift for the 4-pound Ingenuity to rise up, its two rotors, each about 4 feet wide, had to spin in opposite directions at more than 2,500 revolutions per minute.

It hovered at a height of some 10 feet for about 30 seconds. Then it descended back to the surface.

But at that moment, no one on Earth — including people at NASA — knew what was actually happening. The two spacecraft were not in communication with Earth during the test, and Ingenuity had to perform all of its actions autonomously.

It was only three hours later that one of NASA’s other Mars spacecraft, the Mars Reconnaissance Orbiter, passed overhead, and Perseverance could relay the test data back to Earth.

Havard Grip, the engineer who serves as NASA’s chief pilot for Ingenuity, announced as the data arrived that the helicopter had completed “the first powered flight of a powered aircraft on another planet.”

NASA officials said they have named the airstrip where Ingenuity took off and landed Wright Brothers Field. A small piece of fabric from the original Wright airplane was glued to Ingenuity and sent to Mars.

Aung told her team to celebrate the moment. “And then after that, let’s get back to work and more flights,” she said.

With the first trip’s success, up to four more flights could be attempted. The first three, including Monday’s, are designed to test basic abilities of the helicopter. The second, which could occur as soon as Thursday, is to rise to an altitude of 16 feet and then travel horizontally about 50 feet before returning to its original location.

The third flight could fly a distance of 160 feet and then return. Grip said the team had not decided on plans for the final two flights. “What we’re talking about here is going higher, going further, going faster, stretching the capabilities of the helicopter in those ways,” he said.

Aung said she thought Ingenuity would squeeze in the remaining four flights over the next two weeks. She also wanted to push Ingenuity to its limits and for the last flight to travel 600 or 700 meters — or up to 2,300 feet.

NASA plans to wrap up the tests within 30 Martian days of when Ingenuity was dropped off on April 3 so that Perseverance can commence the main portion of its $2.7 billion mission.

Ingenuity was an $85 million nice-to-have, add-on project, but not a core requirement for the success of Perseverance.

The looser requirements of a technology demonstration allowed the engineers to use an almost off-the-shelf Qualcomm processor that was originally developed for cellphones with more computing power than all previous interplanetary spacecraft combined.

The processor, which was not adapted for the harsh conditions of space, was more susceptible to disruptions of radiation, but the helicopter needed all of that number-crunching speed to maintain steady flight.

The little machine, which traveled to Mars tucked on the underside of Perseverance, has also captured the imaginations of many.

Just before Perseverance launched to Mars in June last year, Jim Bridenstine, the NASA administrator at the time, said, “I’ll tell you, the thing that has me the most excited as an NASA administrator is getting ready to watch a helicopter fly on another world.”

John P. Grotzinger, a professor of geology at the California Institute of Technology and formerly project scientist for Curiosity, an earlier Mars rover that arrived in 2012, said he was also a fan of Ingenuity.

“This is a really viable way to go about exploring the planet because you can cover so much area,” Grotzinger said.

A helicopter, especially one flying in the thin air of Mars, could carry only a limited number of sensors, and it would not be able to see things as detailed as a rover, which can move a robotic arm and press instruments right against a rock.

“But the trade-off gives us access to a different part of understanding Mars,” Grotzinger said.

Once the demonstrations are over, Perseverance will leave the helicopter behind and head toward a river delta along the rim of Jezero crater where sediments, and perhaps chemical hints of ancient life, are preserved.

Scientists and engineers are getting their instruments on Perseverance ready to start collecting data.

That includes a laser that has begun vaporizing nearby rocks and soil to analyze their chemical composition and an experiment that is designed to break apart carbon dioxide to generate oxygen. That technology will be key for providing astronauts air to breathe when they eventually step foot on Mars.

In addition to Perseverance, two other new visitors also arrived at the red planet from Earth this year.

China’s Tianwen-1 probe entered orbit in February. As early as late May, it will release a lander and rover that will try to reach the surface of the red planet. If it succeeds, it will be China’s first successful touchdown on another planet — it has landed on the moon three times already.

The United Arab Emirates’ Hope probe also arrived at Mars two months ago. After a firing of its thrusters on March 29, it has entered into an orbit where it can begin a close study of the planet’s atmosphere and weather. That phase of scientific research was scheduled to begin last Wednesday. 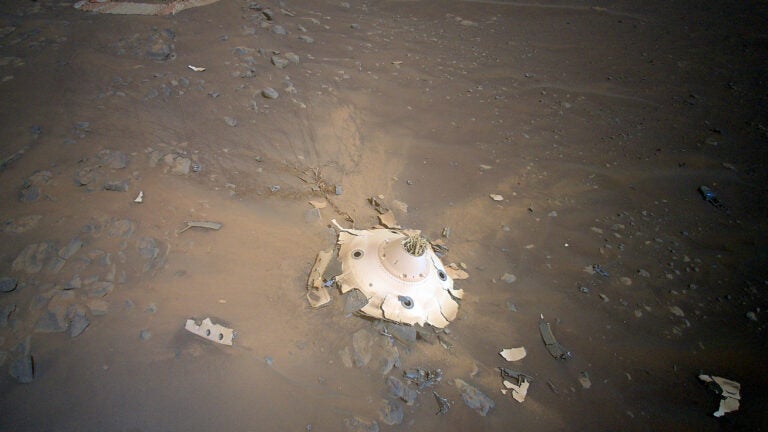