In her new book, Aly Raisman says it wasn’t until she started seeing other doctors and athletic trainers that she began to realize that the so-called “treatment” she received from USA Gymnastics doctor Larry Nassar was not typical.

On Monday, People published an excerpt of Raisman’s book, Fierce, in which the 23-year-old Needham native describes the alleged sexual abuse she experienced at the hands of the team doctor, who has been accused of sexually abusing hundreds of athletes under his care. Raisman first spoke publicly about her experience in a Sunday interview on 60 Minutes.

The six-time Olympic medalist has said she began receiving treatments from Nassar when she was 15 years old.

“I would lie on the table, my hands involuntarily balling themselves into fists as his ungloved hands worked their way under my clothing,” Raisman wrote in a section of the book that People excerpted. “‘Treatment sessions’ with him always made me feel tense and uncomfortable.”

Due to Nassar’s reputation for being “the best doctor,” Raisman said she tried to assure herself that what he was doing was above board.

“I would grit my teeth,” she wrote in another section that People excerpted, “trying to convince myself that all this was part of the healing process. The truth was he never made my injuries feel any better, but I always obeyed because he had a reputation for being the best doctor.”

Raisman, whose book will be published Tuesday, told People that before coming forward with her story, she was worried about what others would think.

“I was a textbook victim, brainwashed to believe I was fine,” she told the publication.

On the Today show Monday, the gymnast shared that part of what made her realize that speaking up was “the right thing to do” was receiving a letter from a 14-year-old girl who, inspired by Raisman’s August comments calling out the national team’s handling of allegations against Nassar, disclosed that she was being sexually abused by her father.

“I realized that letter is more important to me than any medal I’ve ever won in my life,” Raisman said. “She changed my life because she made me realize this is the right thing, and if I can help one person then that’s totally what it’s all about.” 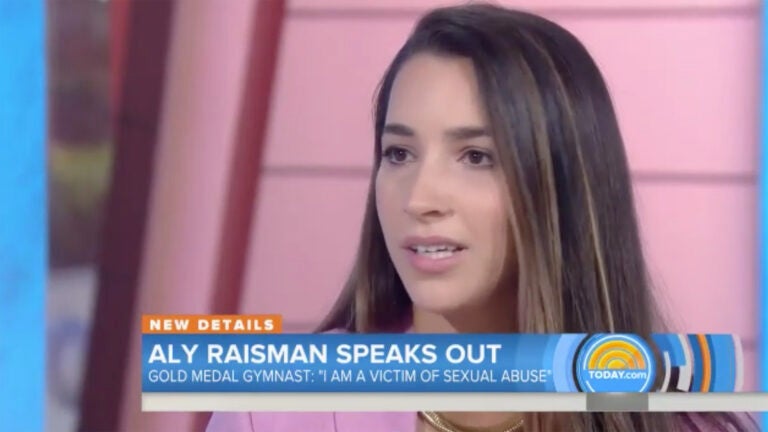 Aly Raisman tells Today: ‘I stand here with all the other survivors’