The motto is bannered on the Hopkinton website, laid into the floor of the Marathon Elementary School, painted on a sign that sends Boston Marathon participants off on their way to Copley Square. Since 1924, this 300-year-old town serendipitously located 26.2 miles west of Boston has been the starting line for the world’s most prestigious road race and, like Marathon and Athens themselves, the two are enduringly linked.

“It gets stronger and stronger every year, this relationship,” said Tim Kilduff, a longtime Hopkinton resident and former Boston Marathon race director. “We see it as: The spirit of the marathon resides in Hopkinton, and we lend it out one day a year.”

From the starting line in this leafy Colonial town to the finish on Boylston Street, residents and runners are preparing for a spring without the Boston Marathon — the first in 124 years. Organizers and authorities have postponed the race originally scheduled for Monday until Sept. 14 because of the coronavirus pandemic, stripping the streets of brightly colored singlets and opening a gap in the sporting schedule for runners from all over the world.

“Tradition’s an overused word. But this really is a rite of spring,” Kilduff said. “So this year it will lead into a beautiful fall season in New England.” Fans cheer on the third wave of runners at the start of the 123rd Boston Marathon in Hopkinton, Mass., last year.

On a regular marathon weekend, Hopkinton triples in size from its 16,000 residents to absorb a field of more than 30,000 runners, wheelchair racers and hand cyclists. The Town Common teems with people, along with food carts and other vendors serving both tourists and race participants previewing the course.

But while others may think of Hopkinton only on the third Monday in April, the marathon and its essence permeates the town all year.

Residents drive over the starting line painted on Main Street on their way to work or to concerts at the gazebo. An International Marathon Center is planned for the town, a sister city of Marathon, Greece, where the long-running tradition was birthed. There are three marathon-related statues in Hopkinton, including “The Starter,” which stands at the starting line, pistol raised, ready to send the field off for another race to Boston’s Back Bay.

These days, his face is covered with a cloth mask.

“This is not the NBA or baseball or the NFL. This is ours,” said Kilduff, who was the race director in 1983-84, ran the marathon in 1985 and for the last 33 years has been a spotter on the truck that leads the men’s field to the finish line.

“Anybody who has run the race, volunteered for the race, supported the race, feels that they own a part of the race. They own just a little bit. So it’s ours,” he said. “The Boston Marathon is almost bigger than itself in the emotion it elicits, and the respect that people have for it.”

Stopping for a kiss

Training for a marathon can be a solitary endeavor, but the event itself is a social distancing calamity.

Participants crowd into corrals to wait for the start, then run in packs to minimize air resistance. Volunteers hand out water on the course and medals at the finish. Fans and family are waiting with high fives or hugs.

At Wellesley College, where the cheering is so loud it is known as the Scream Tunnel, students traditionally wave signs encouraging the runners to stop for a kiss. It’s hard to imagine this custom — already a relic of another era — surviving post-pandemic.

“A lot of the signs are jokes about kissing. That’s part of the tradition, too,” said Erin Kelly, a senior who returned home to San Diego when the campus closed. “The marathon is just a big part of Wellesley’s culture. I was looking forward to seeing it as a student one last time.” 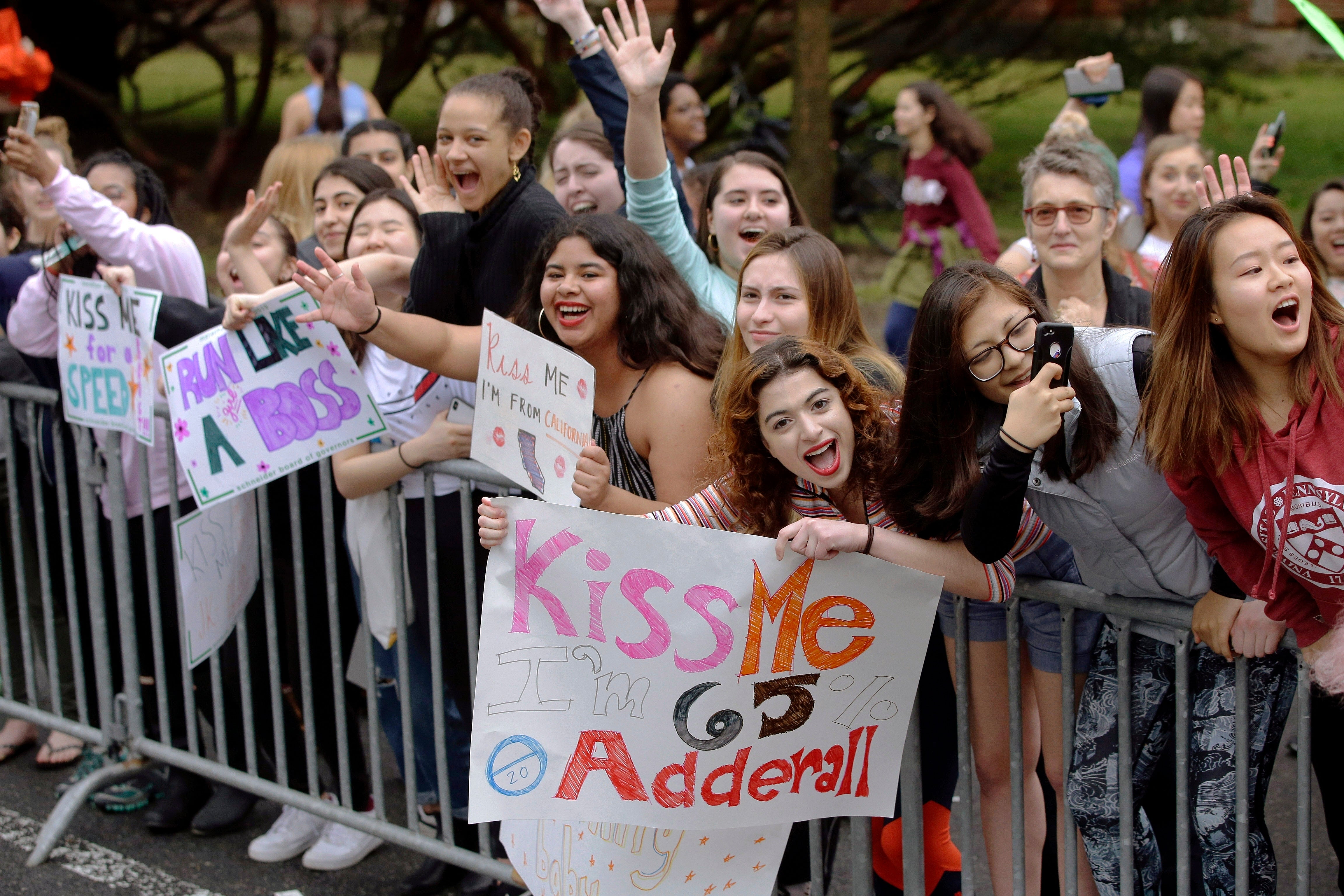 Oncologist Amy Comander decided to run the Boston Marathon in 2013, when colleagues at Massachusetts General Hospital treated many of those injured when two pressure-cooker bombs exploded at the finish line.

“I just told myself: You’re running next year. And I did,” she said.

And every year since.

After starting work at Newton-Wellesley Hospital, right around the Mile 16 marker, Comander has used it as a base for her training runs. During the race itself, the sight of coworkers, friends and even patients out front cheering her on gives her a boost of energy right when she needs it: just before making the turn toward Heartbreak Hill.

“I see it as a true privilege that I can go to work and I’m on the marathon course,” Comander said. “You’re talking to someone who truly loves everything about the Boston Marathon.”

Comander is registered to run for her seventh year in a row, this time to raise money for cancer survivors and their families; she is still determined to do so in September. But on Monday, she will be caring for cancer patients, a task more stressful because of the danger the coronavirus poses to their weakened immune systems.

“I will be a little sad,” said Comander, who plans to take a break from the clinic to get in an 8-mile run — but not on the course, per the request of authorities concerned about crowds. “I feel like I need to do that for myself.” 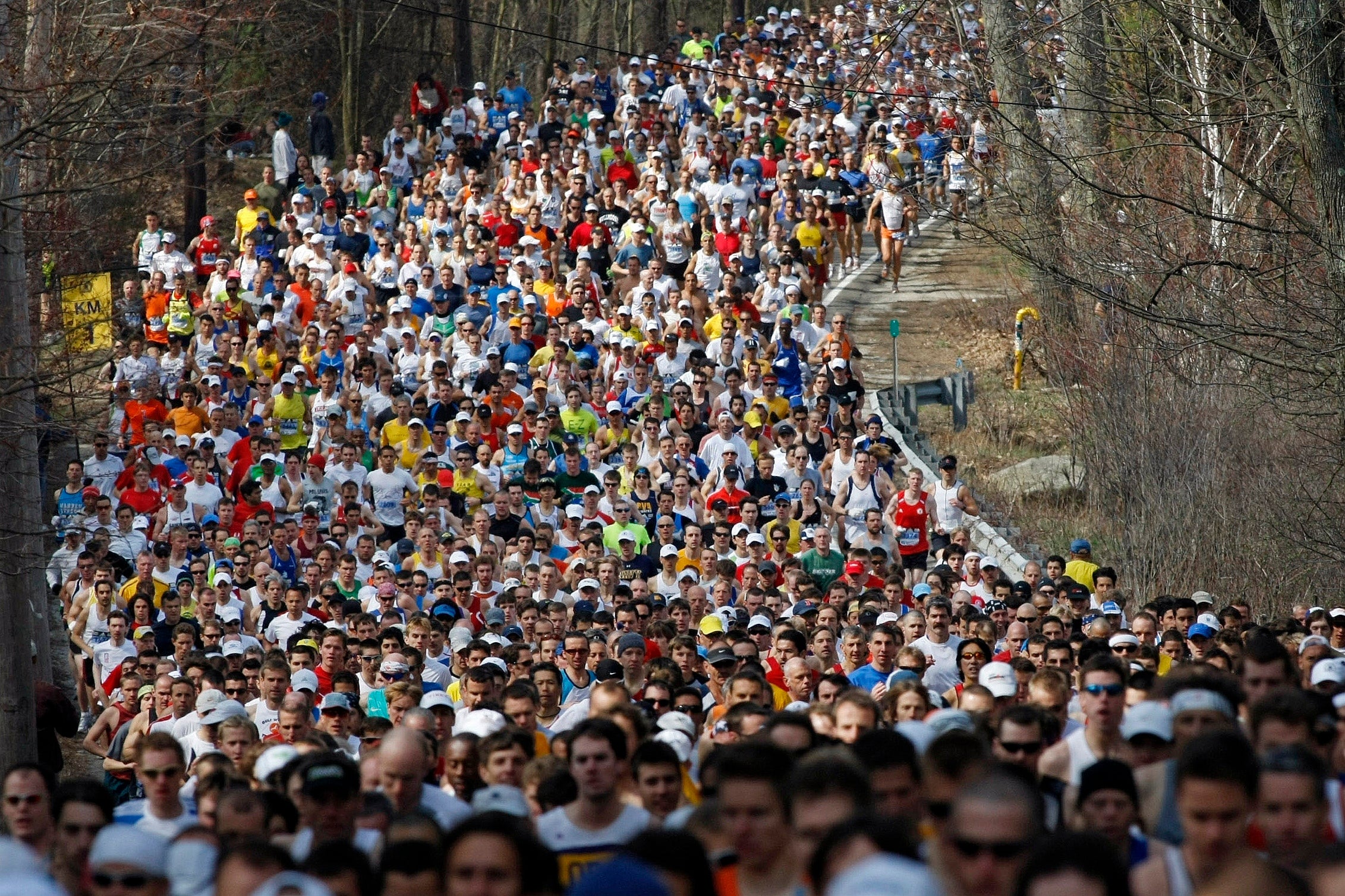 In this April 21, 2008, file photo, runners round a curve and climb a hill near during the first mile of the 112th Boston Marathon in Hopkinton, Mass.

The daffodils are in bloom now from Hopkinton Green to Copley Square and all along the 26.2-mile route in between. Thousands of the bright yellow flowers were planted after the 2013 bombing as a symbol of rebirth and resilience, and they have the benefit of blossoming in mid-April — right around Patriots’ Day — to cheer the runners along.

Thousands more potted daffodils have decorated the course each year since the explosions at the finish line that killed three people and wounded more than 180 others. With the state holiday and the race postponed until the fall, the blooms will have long since withered.

Instead, many of the flowers grown to decorate the course were placed outside of hospitals to thank health care staffers for working through the pandemic. Outside Beth Israel Deaconess Medical Center in Boston, just down the road from the 1 Mile To Go marker in Kenmore Square, the flowers were arranged in a heart. A sign encouraged workers to take a plant home. Just a few steps from the finish line, the Marathon Sports shoe store on Boylston Street gets especially busy over the weekend leading up to the race, when tens of thousands of runners descend on the Back Bay. Things typically cool off on Monday, giving the staff a chance to pop out and cheer the finishers.

“We don’t have any official party,” said Dan Darcy, the chain’s marketing director. “It’s really just a celebration of the runners that day.”

Marathon participants are easily recognizable after the race: There is the medal around their neck, of course, and a mylar warming blanket draped around their shoulders if the weather is cold. Often their bib number is still pinned to their chest.

“If we have any runners coming through our doors on Marathon Monday, I can tell you they’ll be recognized and they’ll hear the support from our staff,” Darcy said in a telephone interview from Fairbanks, Alaska, where he is working remotely.

Marathon Sports has been a reluctant landmark since the first of the two bombs exploded outside its window at 2:49 p.m. on April 15, 2013. Darcy was watching the race from a different spot that day and tried unsuccessfully for hours to get in touch with his coworkers. A few were injured; others turned the store into a field hospital, treating the wounded until trained first responders could arrive.

A memorial stands on the sidewalk outside to the three killed in the explosions and the two police officers who died in the ensuing manhunt, which shut down the city and surrounding area for much of the week. The store reopened about two weeks later.

“We are going to be encouraging runners to go out and get a run in on their own, keeping the social distancing, but not to run the race route itself,” Darcy said. “We’re not able to do any sort of celebration.” 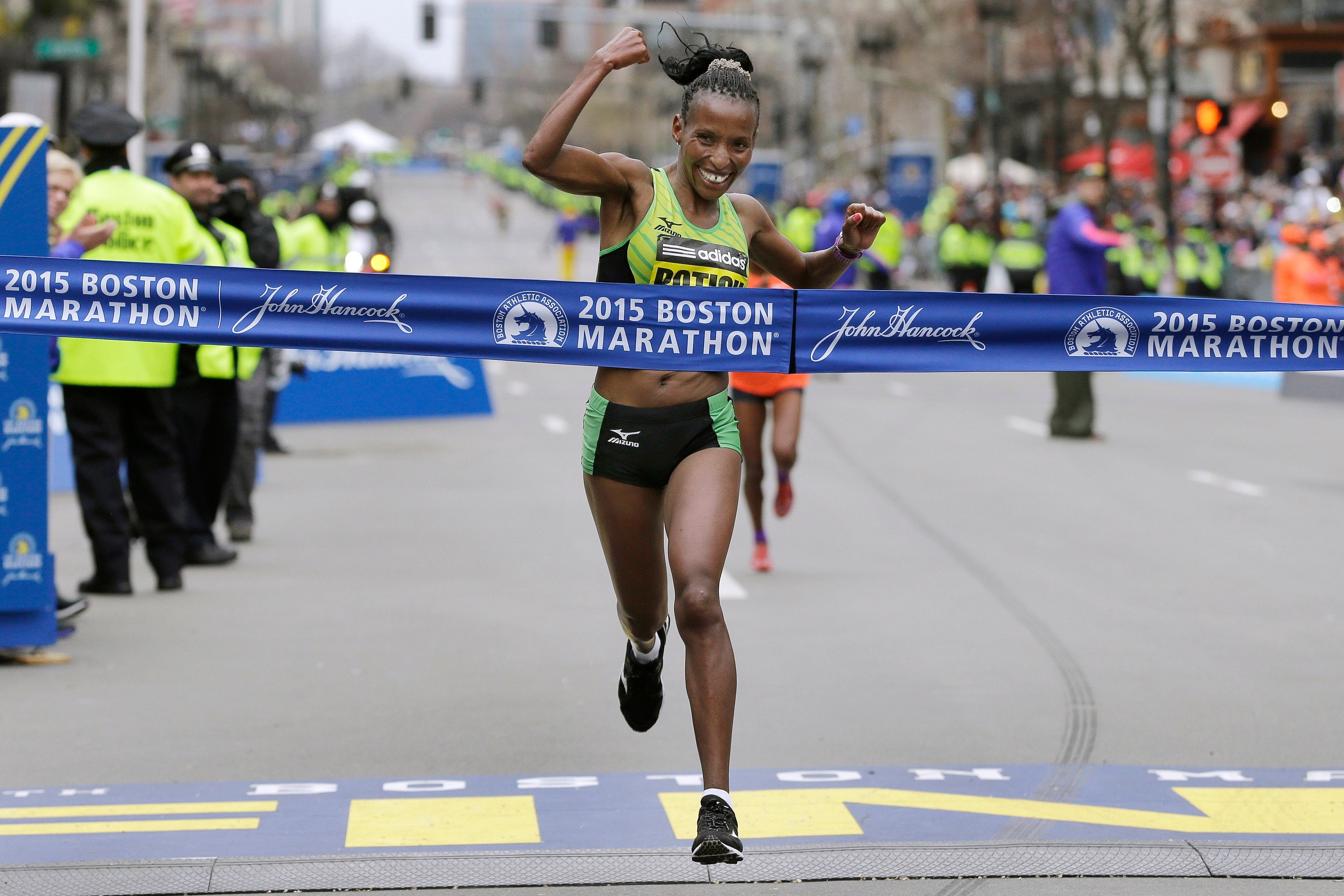 In this April 20, 2015, file photo, Caroline Rotich, of Kenya, crosses the finish line to win the women’s division of the Boston Marathon in Boston.

A different kind of isolation

Last month, as Americans began to isolate indoors and one sporting event after another was canceled, the Boston Athletic Association sacrificed its spring start in the hopes of keeping its 124-year tradition alive.

Since the first edition in 1897, the race had always coincided with the state holiday of Patriots’ Day that commemorates the first shots in the Revolutionary War. As the snow melts in New England, the course becomes increasingly populated with joggers emerging from a winter indoors to get in their training runs.

To Kilduff, this year’s fall race will be an opportunity to come out of a different kind of isolation.

“You know what happened in the year after the bombing: There’s going to be this huge buildup of pent-up energy. And it’s going to be exhibited on the course,” he said. “It’s going to create a brand new chapter in the history of the Boston Marathon.

“I’m excited as hell about this.”

Jimmy Golen has covered the Boston Marathon for The Associated Press since 1995. 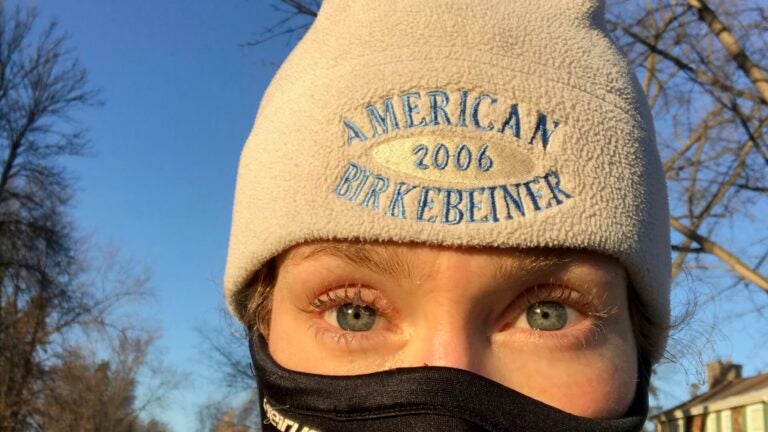 I was supposed to run the Boston Marathon on Monday. How I’m honoring the race instead.