For nine years, the secretive firm — which got its start with U.S. military funding — has unnerved people around the world with YouTube videos of experimental robots resembling animal predators.

In one, a life-size robotic wildcat sprints across a parking lot at almost 20 miles an hour. In another, a small wheeled rover nicknamed SandFlea abruptly flings itself onto rooftops — and back down again.

A more recent effort features a slender dog-like robot that climbs stairs, holds its own in a tug-of-war with a human and opens a door to let another robot pass.

These glimpses into a possible future of fast, strong and sometimes intimidating robots raise several questions. How do these robots work? What does Boston Dynamics intend to do with them? And do these videos — some viewed almost 30 million times — fairly represent their capabilities?

Boston Dynamics has demonstrated little interest in elaborating. For months, the company and its parent, SoftBank, rebuffed numerous requests seeking information about its work. When a reporter visited company headquarters in the Boston suburb of Waltham, Massachusetts, he was turned away.

But after The Associated Press spoke with 10 people who have worked with Boston Dynamics or its 68-year-old founder, Marc Raibert, the CEO agreed to a brief interview at a robotics conference in late May. Raibert had just demonstrated the machine that will be the company’s first commercial robot in its 26-year history: the dog-like, door-opening SpotMini, which Boston Dynamics plans to sell to businesses as a camera-equipped security guard next year. 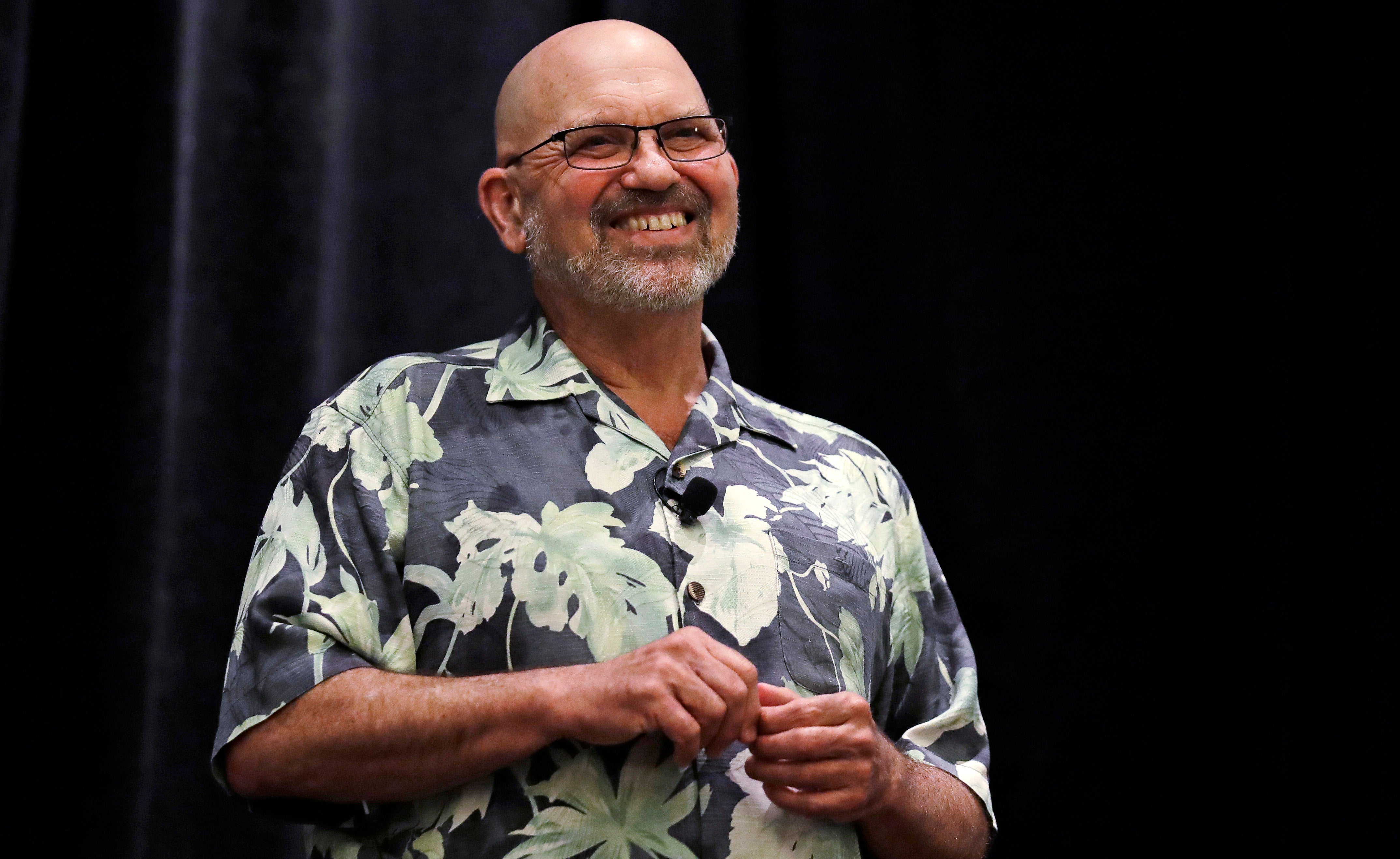 In this Thursday, May 24, 2018, photo, Boston Dynamics founder and CEO Marc Raibert smiles as he responds to a question during a robotics summit in Boston.

The company hasn’t announced a price for the battery-powered robots, which weigh about the same as a Labrador retriever. Raibert said it plans to manufacture 1,000 SpotMinis annually.

Speculation about Boston Dynamics’ intentions — weapons or servants? — spikes every time it releases a new video. The SpotMini straddles that divide, and Raibert told the AP that he doesn’t rule out future military applications. But he played down popular fears that his company’s robots could one day be used to kill.

“We think about that, but that’s also true for cars, airplanes, computers, lasers,” Raibert said, wearing his omnipresent Hawaiian shirt as younger robotics engineers lined up to speak with him. “Every technology you can imagine has multiple ways of using it. If there’s a scary part, it’s just that people are scary. I don’t think the robots by themselves are scary.”

The firm’s previous military projects included a four-legged robotic pack mule that could haul supplies across deserts or mountains — but which sounded like a lawnmower and was reportedly deemed too noisy by the U.S. Marines.

The bigger question of just what Boston Dynamics hopes to accomplish remains murky — and that may be by design. Interviews with eight former Boston Dynamics employees and some of Raibert’s former academic collaborators suggest that that the company has long brushed aside commercial demands, not to mention outsiders’ moral or ethical concerns, in single-minded pursuit of machines that mimic animal locomotion.

Former employees say the company has operated more as a well-funded research lab than a business. Raibert’s vision was kept alive for years through military contracts, especially from the Defense Advanced Research Projects Agency, known as DARPA. A federal contracting database lists more than $150 million in defense funding to Boston Dynamics since 1994.

Boston Dynamics said only it believes a quarter-century of work on robots will “unlock a very high commercial value.” It did not answer when asked if it ever entertained proposals to weaponize them.

Building robots that can jump, gallop or prowl like animals was a fringe field of engineering when Raibert and his colleagues began studying kangaroo and ostrich videos in their Carnegie Mellon University research lab nearly 40 years ago.

But agile robots aren’t so sci-fi anymore, even if they can still seem that way. Boston Dynamics’ Atlas robot, for instance, is a hulking humanoid machine that can be seen hiking across broken ground, jumping onto pedestals, and even performing an ungainly backflip. (The company’s robot videos have not been independently verified.)

In videos, the company’s robots wander through a variety of locales — in and around the company’s single-story headquarters, a New Hampshire ski lodge and across the secluded meadows and woodlands near Raibert’s home. In some videos, humans kick the robots or jab them with hockey sticks to test their balance.

Michael Cheponis, who worked with Raibert at CMU’s pioneering robot laboratory in the 1980s, calls his former colleague an “American hero” for sticking with a vision that could prove useful to the world. “Marc doesn’t have the slightest Dr. Evil in him,” Cheponis said.

The defense contracts began winding down in 2013 when Google bought Boston Dynamics and made clear it wanted no part in defense work. Andy Rubin, then Google’s chief robotics executive and architect of the acquisition, swept into the firm’s lunchroom to give a pep talk to employees shortly after the deal was announced in December 2013.

Attendees later said they felt a sense of relief and cautious optimism. “He was talking about really ambitious goals,” said one former employee, who asked not to be identified because of concerns it could hurt career opportunities in the small and tight-knit U.S. robotics community. “A robot that might be able to help the elderly and infirm. Robots that work in grocery stores. Robots that deliver packages.”

But the Google honeymoon soon soured. Rubin left the company the following year and his replacements overseeing Boston Dynamics grew increasingly frustrated with Raibert’s approach, according to several people familiar with the transition. Among the concerns: Boston Dynamics’ lack of focus on building a sellable product.

Google also grew concerned that “negative threads” on social media about the firm’s “terrifying” robot videos could hurt its image, according to leaked emails from its public relations division obtained by Bloomberg in 2016.

Inside the company, the idea that its robots could be turned into weapons occasionally inspired casual workplace chatter, chuckles or discomfort, several former employees said. But few took it seriously.

“They’re definitely aware that people are frightened by them,” said Andrew String, a former Boston Dynamics engineer. “The company regularly gets hate mail and other weird stuff.” But he said Raibert never felt a need to explain himself, and instead wanted the technology to speak for itself.

By 2016, Google was looking to sell the firm — eventually finding an interested buyer in Japanese tech giant SoftBank, which already has a robotics portfolio that includes the cute humanoid Pepper. The deal closed earlier this year.

SoftBank declined to say anything about its plans, but Boston Dynamics’ latest job postings reveal a heightened emphasis on finding something that sells. One posting seeks a “robot evangelist” to help find “market-driven” applications for the machines in logistics, construction and commercial security.

Raibert credited Google for pushing the firm forward to perform the “best work we ever did,” but said under SoftBank his team is acting as a “standalone company” again.

“We have a very strong plan,” he said. “We’re all digging in and working hard on it.”

___
This story has been corrected with the proper spelling of Andrew String’s name. 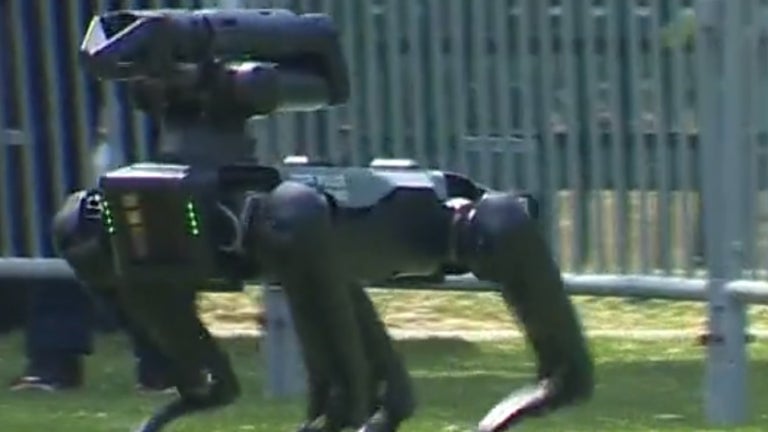