WASHINGTON — In late January, as China locked down some provinces to contain the spread of the coronavirus, average internet speeds in the country slowed as people who were stuck inside went online more and clogged the networks. In Hubei province, the epicenter of infections, mobile broadband speeds fell by more than half.

In mid-February, when the virus hit Italy, Germany and Spain, internet speeds in those countries also began to deteriorate.

And last week, as a wave of stay-at-home orders rolled out across the United States, the average time it took to download videos, emails and documents increased as broadband speeds declined 4.9% from the previous week, according to Ookla, a broadband speed testing service. Median download speeds dropped 38% in San Jose, California, and 24% in New York, according to Broadband Now, a consumer broadband research site.

Quarantines around the world have made people more reliant on the internet to communicate, work, learn and stay entertained. But as the use of YouTube, Netflix, Zoom videoconferencing, Facebook calls and videogaming has surged to new highs, the stress on internet infrastructure is starting to show in Europe and the United States — and the traffic is probably far from its peak.

“This is totally unprecedented,” said Thierry Breton, a European Union commissioner who oversees digital policy and was a chief executive of France Télécom. “We have to be proactive.”

To head off problems, European regulators like Breton have pushed streaming companies such as Netflix and YouTube to reduce the size of their video files so they do not take up as much bandwidth. In the United States, regulators have given wireless carriers access to more spectrum to bolster the capacity of their networks.

Some tech companies have responded to the call to ease internet traffic. YouTube, which is owned by Google, said this week that it would reduce the quality of its videos from high to standard definition across the globe. Disney delayed the start of its Disney Plus streaming service in France by two weeks, and Microsoft’s Xbox asked gaming companies to introduce online updates and new releases only at certain times to prevent network congestion.

“We really don’t know how long we’re going to be in this mode for,” Dave Temkin, Netflix’s vice president of network and systems infrastructure, said in a webinar Wednesday on how the coronavirus could affect internet infrastructure.

Internet service providers like Comcast, Vodafone, Verizon and Telefónica have been building out their networks for years to account for increasing demand. But company officials said they had never seen such a steep, sudden surge. Growth that the industry had expected to take a year is happening over days, said Enrique Blanco, chief technology officer at Telefónica, a Spanish telecommunications company.

“In just two days we grew all the traffic we had planned for 2020,” Blanco said.

Last week, mobile traffic on AT&T’s networks rose 40% while Verizon experienced a 22% increase in traffic on its wireless and fiber broadband service. Wi-Fi calls doubled from their normal volume, the carriers said.

In Europe, internet traffic into homes over fixed lines was up more than 30%, according to Telefónica. Activities like online gaming and video conferencing have more than doubled, while messages over WhatsApp have more than quadrupled.

So much traffic and stress on internet networks has slowed the speed of downloading webpages and apps, according to Ookla.

“Congestion is higher,” said Adriane Blum, an Ookla spokeswoman. “We’re all at home and the activities we’re doing in this unprecedented time are not low-bandwidth usage, which means a lot of activity on a network.”

Cisco said demand for its WebEx teleconference service had tracked the spread of the coronavirus. Demand first surged in Asia, then in Europe, and last week it soared 240% in the United States. The demand has pushed up failure rates delivering video conferencing, said Sri Srinivasan, a Cisco senior vice president in charge of WebEx.

“I don’t know if we’ll soon see a peak, not for weeks to come,” he said. “The reason I say that is because we aren’t seeing traffic in Asia slow down even now.”

Internet service providers said they could handle the deluge of traffic but were adding capacity. Verizon, Cox and AT&T said they were building more cell sites to strengthen mobile networks, increasing the number of fiber connections on their network backbones, and upgrading the routing and switching technology that lets devices talk to one another and share an internet connection.

Orange, formerly France Télécom, has doubled its capacity inside undersea internet cables. In Italy, where home internet use is up 90%, Telecom Italia said its technicians continued to make repairs and add capacity. Vodafone, one of Europe’s largest networks operators, said it had increased its capacity 50% in recent weeks through a mix of software and the addition of more equipment in the field.

“We’re seeing some signs of stress,” AT&T’s chief executive, Randall Stephenson, said in an interview on CNN on Sunday. “We’re having to go out and do some augmentation of networks, and so we’re sending our employees out there to get that done, but right now the network is performing quite well.”

To prevent clogged networks, Europe has taken the most aggressive steps.

Last week, Breton, the EU commissioner, discussed reducing the bitstreams of videos with Reed Hastings, the chief executive of Netflix; Sundar Pichai, the chief executive of Google; and Susan Wojcicki, the head of YouTube. The companies agreed, as did Amazon for its Prime Video streaming service and Twitch, its online gaming platform.

Many of the companies then went further. On Tuesday, Netflix decided to switch its high-definition video streams in India, Australia and Latin America to slightly lower quality to reduce the traffic they create there by 25%, and YouTube said it would make all global streams standard definition.

“We continue to work closely with governments and network operators around the globe to do our part to minimize stress on the system during this unprecedented situation,” YouTube said in a statement.

Microsoft’s Xbox gaming business recently asked large gaming companies to release online updates of their games during off-peak hours while it helped focus on the critical internet needs of people involved in the coronavirus crisis, according to an Xbox email reviewed by The New York Times. Video game updates can require great amounts of bandwidth to download.

Xbox asked the companies to release updates in a four-hour overnight window in North America, and only from Monday through Thursday.

“Microsoft is actively monitoring performance and usage trends to ensure we’re optimizing service for our customers worldwide, and accommodating new growth and demand,” the company said. “At the same time, these are unprecedented times, and we’re also taking proactive steps to plan for these high-usage periods.”

While U.S. regulators said they did not plan to follow Europe in asking for streaming and social media companies to degrade their services, they are taking other steps. Last week, the Federal Communications Commission granted Verizon, AT&T and T-Mobile temporary access to more airwaves.

“The FCC has been coordinating closely with network operators to ensure those networks remain up and running,” Ajit Pai, the agency’s chairman, said in a statement.

Telefónica’s Blanco, who has been living under a lockdown in Spain, said he expected the record traffic to last for some time. It may even become the new normal, he said.

In Spain, internet use drops only at 8 p.m., when people across the country go to their windows to cheer health workers and others who are helping to manage the crisis. 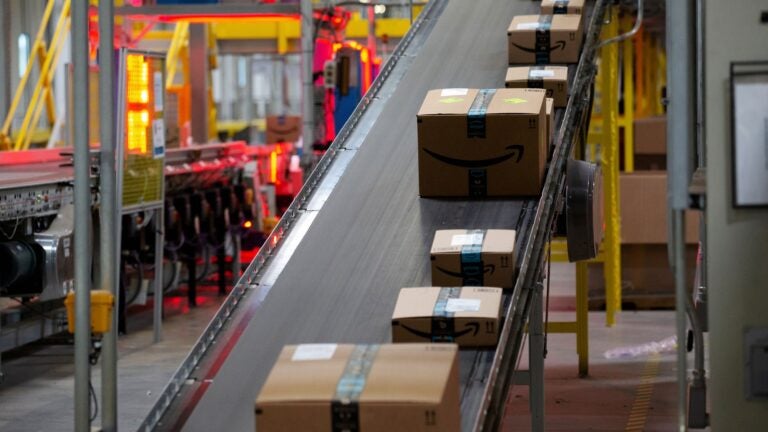 While many file for unemployment, these companies are hiring thousands. Here’s why.