Ethan Kelly was walking through Harvard Yard to class one day in the spring 2022 semester when he stopped at a booth giving out free cookies and was asked to download an app called Sidechat.

Kelly, a freshman at the time, wasn’t yet familiar with Sidechat, an app where users sign up with their university email addresses and can write anonymous posts visible only to other students at their schools. Sidechat is only active at a small number of elite universities, Harvard and Tufts among them.

The idea of anonymous posting isn’t new — think YikYak, a recently-relaunched app from the early 2010s that allows users to create discussion threads with people in a 5-mile radius. In fact, Sidechat was initially described to Kelly as a “Harvard-only version of Yik Yak.”

Anonymous posting for your specific university is also not a unique idea — think university-designated Facebook and Instagram accounts where students share anonymous confessions and secrets for peers to see.

But what is new is a platform that is specifically designed to combine both. And that’s Sidechat. It’s a place where students can share any opinions on pretty much any issue, often falling at odds with each other. Sometimes, the opposing opinions can be amusing, but they can also be harmful.

Even though it’s marketed as a fun way to connect with fellow students, the app has also brought with it toxic, targeting posts, and an exclusive community that isolates students who aren’t iPhone users.

“I’ve seen people use names and before the admins delete it, you can see some pretty gnarly stuff about people,” said Jula Harrington, who graduated from Tufts this spring.

Despite those issues, though, campus opinion seems generally positive — unless you’re one of the people to come out on its bad side.

Out with the old, in with the new

The desire to anonymously share secrets on the Internet seems to be an innate desire of Generation Z. Ask.fm and Yik Yak were popularized because they allowed people to do just that, but eventually fell out of favor because of their toxicity. In Sidechat’s case, even the creators of the app keep themselves notoriously anonymous.

On an individual college basis, things like Yik Yak were replaced by Facebook and Instagram “confessions” or “secrets” pages. The Facebook page “Harvard Confessions” has 4,300 likes and 5,000 followers. “Tufts Secrets” on Facebook, though it hasn’t been active since February 2021, has 2,955 likes and 3,584 followers.

When Tufts Secrets stopped posting, Tufts students had no outlet for this desire for anonymity. The Instagram account @tuftsuconfessions was started, and first posted on Nov. 2, 2021. With 541 posts since and 1,446 followers, it became the top way for students to share their deepest and darkest secrets. It even inspired @tuftspocconfessions, an account for students of color specifically to submit secrets and confessions.

That is, until Sidechat came on the scene.

“People have longed for an anonymous way to say things, and I think Sidechat came at the perfect time, where people can say things without it being directly attached to them,” said Amiel Bakshi, a rising senior at Harvard and a Sidechat user.

But Sidechat dethroned the confessions accounts that used to be, quite literally, the talk of the town, as well as the POC confessions account that started at Tufts this past year. POC students have shared many a story on Sidechat.

“Sidechat definitely has taken away from the activity of this account, no doubt about that,” said B, who runs @tuftsuconfessions and requested to be identified only by an initial.

Sidechat is a designated platform for students to go to see secrets and confessions all in one place, rather than scattered through a Facebook or Instagram feed that includes other posts. It also works on a more efficient system.

“There’s no reason for people to submit to us and wait for us to make the post, when they can just do it by themselves on Sidechat,” B said. “Sidechat is the new anonymous platform.”

The trouble with toxicity

Students have a lot of good to say about Sidechat, but it’s far from all positive.

When students submit to something like a confessions page, their submission goes through a real person who can decide not to post it if it seems offensive or problematic, but with Sidechat, the posting power rests with the individual themselves, and sometimes, that gets out of hand.

“Some posts feel extremely targeted,” Bakshi said. “There have been posts that I’ve seen that are about my friends or about me and they have hurt now and then.”

Though the app has moderators and an ability to report posts, and posts that are reported can get taken down, sometimes it’s too little, too late.

“Some of my friends I know personally who have been targeted by name on this app have deleted the app because they no longer even want to be associated with it, they don’t even want to see it,” said Kelly, now a rising sophomore at Harvard who uses Sidechat. “Some of the things on Sidechat definitely are a little bit too extreme.”

Plus, Harrington pointed out, there are ways to identify people other than by name. She’s seen posts about people who are identified by a position they hold on campus, like president of a club or a certain member of a sports team. The admins won’t catch those posts because they don’t have names, she said, but people on campus still know who it is.

Aside from posts targeting individuals, some posts involve large groups of people or are intentionally incideniary.

“We’ve had some comments about affirmative action, some comments about abortion, especially after the [Supreme Court] draft leak came out, there was a lot of argumentation back and forth,” Kelly said. “Sidechat has definitely turned into this place where people will send unpopular opinions and some of them are very intentionally provocative.”

The anonymous aspect of the app is what empowers this kind of hate, said Kelly.

“The anonymity has made it so people will do things and say things they never would on a public level, which I think can be negative if people hold hateful beliefs or they try to do things to harm people’s reputation behind a screen,” Kelly said.

Dr. Keith Maddox, a professor of psychology and the director of the Tufts University Social Cognition Lab, said the psychology behind anonymity affirms Kelly’s statement.

“People, for the most part, pay attention to social norms: the expectations, guidelines for how you’re supposed to act … because there’s implications for us if we don’t,” he said. “But when it’s anonymous, we don’t have to worry about a norm violation getting in the way … You’re more likely to say things that are socially undesirable.”

He noted that there can be upsides to being able to gain a realistic understanding of how people really think and feel about various issues, but that largely, anonymity inspires more conflict.

“You’re going to say and hear things that maybe violate your ideas of how people should be,” Maddox said.

Aside from the bullying, Sidechat is creating some equity issues on campus.

The app, currently available to iPhone users only, cannot be downloaded by Android phones. With it being such a universal app on campus, Android users can feel isolated when they don’t have the opportunity to be in on the jokes.

“I tried to download it because I thought it would be fun to have, but I found out that it wasn’t offered through the Google Play store, so I wasn’t able to board that train,” said Thomas Felt, who graduated from Tufts University this spring.

Clearly, Sidechat is not all great, with its opportunities for peers to speak badly about others and share inflammatory opinions, plus its exclusion of a certain demographic of students. But still, there may be a net positive coming out of it.

Students say Sidechat — a place where students can do everything together from sharing inside jokes to opening up about mental health — has improved campus culture by creating a sense of collective community. Many of the posts are inside jokes specific to Harvard or Tufts’ students.

“It’s basically a place for people to just put funny stuff about university life — social life and academics — and other people who are in similar positions can see it and relate to it,” said Amiel Bakshi at Harvard.

“It’s definitely contributed to a greater sense of community on campus, because a lot more people are a lot more in tune with what’s going on,” Bakshi said. “It’s presented in a way that Gen Z can understand and people can relate to it … If I go to the top posts of all time it’s all relatable memes specific to Harvard students.”

Kelly added that he’s noticed Sidechat has become a helpful way for students to locate resources.

“I’ve seen people talk about where you can get $15 Plan B [emergency contraception], that’ll go viral. Or sharing resources that are generally helpful, like the finals schedule, the move-out schedule,” Kelly said. “I’ve definitely gotten a lot of information from Sidechat. It has contributed in a helpful way to broadcasting things without you having to follow one individual account.”

The same is true at Tufts. Harrington said it’s “honestly just so fun to feel like you’re a part of a community.”

Sidechat has created new lexicons for students of campus-related memes, jokes, and jargon. Harrington said it’s “really fun” to go on the app when there’s a university event like a speaker, an email from the administration, even graduation — anything that students experience together tends to yield great results on Sidechat.

Aside from the funny stuff, Sidechat can be a good resource for students to vent or seek help on something they’re going through.

When a Tufts student died, a student used Sidechat to gently remind others to use their preferred pronouns.

Another cheered on two boys who were kissing at a Delta Tau Delta fraternity party.

“I think there’s a lot of good that comes out of Sidechat, in the sense that people can ask for advice or get solace on it, without fear of exposing their identity,” Harrington said.

What do you think? Take the Boston.com poll below or email [email protected] with your opinion and your response maybe be published in a future article.

How should colleges handle anonymous apps on their campus? 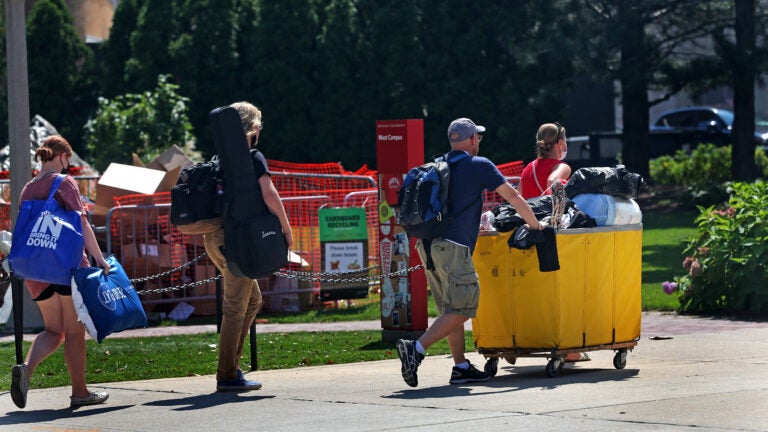