I stood on my skis at the edge of the white expanse and admired the intricate, wind-sculpted snow. Peering over this virgin canvas on Second Roach Pond in Maine, I could imagine that I was a pioneer leaving first tracks. But the scent of wood smoke belied the fact that creature comforts were close by.

Behind me, a graceful timber-framed structure was perched just uphill from the pond’s edge. This was Medawisla, a state-of-the art, off-the-grid ecolodge in north central Maine, near the town of Greenville.

I had come to Maine with my wife and another couple to spend five days and four nights cross-country skiing through the 100 Mile Wilderness, a region that is home to the final stretch of the 2,184-mile-long Appalachian Trail. Just two decades ago, this ski trip would have been inconceivable: Much of this “wilderness” was owned by timber companies and scarred by industrial logging.

In a remarkable turn of events, skiing and hiking have largely replaced logging in a newly protected swath of Maine. In the early 2000s, 6 million acres of forest — more than one-quarter of Maine’s land — was put up for sale by timber companies. The future of the largest forest ecosystem east of the Mississippi River was in jeopardy. In 2003, the Appalachian Mountain Club (AMC) launched the Maine Woods Initiative, which works with local communities to promote outdoor recreation, conservation, sustainable forestry and carbon sequestration (sales of carbon credits are funding additional land purchases).

They conserved 75,000 acres north and east of Greenville, developed 130 miles of recreation trails and acquired three historic sporting camps: Medawisla, Little Lyford and Gorman Chairback. This is part of a broader conservation effort that now covers 750,000 acres extending from Greenville to Baxter State Park, which is home to Katahdin, Maine’s highest peak.

This shift in the Maine Woods from forest exploitation to recreation has yielded an immediate byproduct: one of the best lodge-to-lodge ski routes in the United States. The route showcases both the past and future of Maine, from clear-cuts visible on distant hillsides to the bright green of new growth, a reassuring sign of nature’s resilience.

Medawisla Wilderness Lodge is the grandest of the AMC Maine lodges. The original hunting lodge was built in 1953 and closed in 2012. In 2017, following a $6 million investment, a new ADA-compliant complex opened that includes a solar-powered main lodge, nine cabins and two bunkhouses. The lodge is a showcase for Maine craftsmanship, featuring tables and chairs handmade from curly maple, and figures of loons on the deck that were carved by a local chain saw artist. Outside the dining room windows are expansive views of Second Roach Pond. Those staying at Medawisla, the Wabanaki word for loon, can explore a 35-mile network of groomed cross-country ski trails.

Inside Medawisla’s main building, I found other guests sitting in stuffed chairs around a four-sided stone-and-glass fireplace. At a family-style dinner of roasted tarragon chicken, minestrone and string beans with slivered almonds, I sat next to a woman from Maine who said that she was a seasoned sailor. She casually mentioned her cameo in “The Perfect Storm,” the bestselling book by Sebastian Junger. I barely remember lifting my fork to eat as I listened spellbound to her harrowing tale of survival at sea after her sailboat sank during the epic 1991 nor’easter.

Our trip took place shortly before the start of the pandemic. This winter at the lodges, masks are recommended indoors (where all staff are masked), and breakfast and dinner can either be eaten family style at the main dining rooms or taken back to your cabin.

This trip brimmed with guilty pleasures. The first was traveling in a wild landscape by day and staying in warm lodges each night eating delicious food prepared for us. Another was rolling out of our cabin onto a groomed trail and having our bags transported to our next destination by snowmobile ($20 per bag). That meant we could travel fast and light on cross-country skis through this grand landscape carrying only a small day pack with food, clothes and extra gear.

From Medawisla, we skied up the broad, groomed Lodge-to-Lodge Trail to a scenic high point. We stopped to take in the sweeping 360-degree views of the imposing snow-covered tabletop summit of Big Spencer Mountain (3,215 feet) that crowns this landscape.

After a brief snack we began a long, wind-in-the-face descent. I skied behind my friend John, an airline pilot, who extended his arms as if flying, banking around broad turns as we glided to the valley floor. A small sign directed us to a narrow trail that snaked through the woods until it abruptly emerged onto the bright white expanse of First West Branch Pond and our next lodge. We were greeted by a smiling Eric Stirling, the fifth generation of his family to run West Branch Pond Camps, which was built as a sporting camp in 1881 and owned and managed by his family since 1914.

This is the only privately owned camp on the lodge trip, and it offered a welcome touch of local culture and lore. We stayed in rustic, century-old log cabins beside the frozen pond.

A group of high school students from Massachusetts frolicked on the pond and sledded through the camp, yelping in delight. Their math teacher told me that this winter trip, a 17-year tradition, was a much beloved respite from the rigors and stresses of high school.

I joined Stirling, a bearded, congenial man, as he cooked our dinner on a wood stove in the dining cabin. Stuffed trophy heads adorned the walls. He pointed outside to Whitecap Mountain (3,654 feet), which overlooks the camp, and noted that the Appalachian Trail crosses its summit. He gave voice to what I felt as I relaxed from the day’s skiing.

“My hope,” he told me, “is that skiers take away from here a sense of something that’s been unchanged through the generations.”

Around midnight, I bundled up in a puffy down jacket and ventured out onto the pond to experience something that has never changed out here: darkness. In May, the Maine Woods region was designated the first International Dark Sky Park in New England by the International Dark-Sky Association, which combats light pollution and recognizes places where nighttime views are protected. I peered up at a blue-and-black expanse that was studded with what seemed like a million stars.

Sunrise was accompanied by a stiff 20-degree breeze. We continued our journey 6.5 miles along the meandering snow-covered Pleasant River to Little Lyford Lodge, which was originally built in 1874. Our path crisscrossed myriad animal tracks, including those of moose, mink and otter.

“Moose outnumber people 3 to 1 here,” said Courtney Turcotte, who oversees all of the lodges for the Maine Woods Initiative.

We enjoyed dinner at Little Lyford Lodge beneath a two-story stone fireplace that was adorned with old trapper’s snowshoes.

Our final destination was Gorman Chairback Lodge. We wove our way through tall conifers that shuddered beneath a heavy mantle of snow. A brief squall whited out the trail. Our home for the night was a hand-hewed octagonal log cabin on the shore of Long Pond. Lore has it that the cabin was built by a one-armed Civil War veteran and his son. The dark woody interior was lined with old books, a romantic retreat in the woods.

On our last morning, I was once again perched at the edge of a frozen expanse. A brilliant warm sun made the snow sparkle on Long Pond. Without hesitating, I pushed forward and glided onward into the Maine Woods.

Greenville, Maine, is the jumping-off point for trips to the AMC Maine Lodges. Lodging and shuttle reservations can be made with the Appalachian Mountain Club (603-466-2727). The closest airports are in Bangor (90 minutes) and Portland (3 hours).

Where to ski and stay

Skiers and snowshoers can experience Maine’s wilderness lodges in a variety of ways. Trails are well marked so guides are not needed, although AMC runs several guided group trips (they fill up quickly). Medawisla and the privately owned West Branch Pond Camps are accessible by car (all-wheel drive recommended). Each has miles of ski trails that you can explore while returning to the same place. This is the best option for beginner skiers. Another option is to ski lodge-to-lodge between Little Lyford and Gorman Chairback. Both lodges are only accessible by skis or snowshoes and share the same winter parking lot, so no shuttle is needed. Each of these lodges also has its own trail network. All the lodges have wood-fired saunas.

The ultimate adventure is a lodge-to-lodge ski traverse to all four wilderness lodges. This 32-mile ski requires at least four nights. You ski on groomed trails between lodges and you must do a car shuttle ($60, arranged when you book your lodging) so that your vehicle is waiting at your final destination. The lodges range from $140 to $425 per couple per night, including all meals, depending on type of accommodations. Dogs are also welcome in some cabins; if you ski with them, the hut keepers recommend dog bootees to protect their feet on icy trails.

The skiing follows groomed ski trails, so lightweight waxable or waxless cross-country skis are best. If conditions are icy, some skiers may prefer a light metal-edged ski. Bring a comfortable day pack for food, snacks, extra clothes, and first-aid and repair gear. You can buy or rent skis and other equipment at Northwoods Outfitters in Greenville; book rentals in advance for busy weekends. Complimentary snowshoes are available to use at the lodges.

The AMC Maine Lodges are open for skiing and snowshoeing from mid-January to early March (they are also open in summer and early fall for hiking, fishing and canoeing). Winter weekends fill quickly, but midweek is usually available. And prepare to cut the cord: There is no cell coverage or Wi-Fi at the lodges. 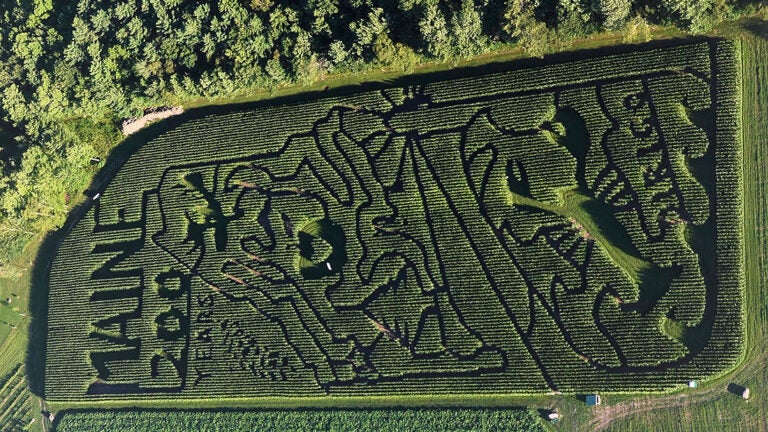 Maine has the best corn maze in America, according to USA Today readers