Ashley Peterson had a different mental image of her Christmas break than what actually transpired: The 32-year-old thought she would finally visit the Caribbean reef-lined island of Bonaire, the 99th country in her quest to travel at least 100.

Instead, her cruise ship, the Carnival Freedom, sailed past its destination Wednesday after a port turned away the boat because of coronavirus infections on board.

At least four sailings on Royal Caribbean, Holland America, Carnival, and others this week were altered by coronavirus outbreaks as cruise ships prepared for pre-pandemic levels before sailings were paused.

Although vessels resuming cruising have beefed up coronavirus precautions, requiring vaccinations and testing passengers, the wave of new infections, fueled by the quickly proliferating omicron variant, has knocked the devastated industry and alarmed cruisers.

“We’re sailing on a petri dish,” Peterson said. “I feel like I just spent my past week at a superspreader event.”

Carnival did not respond to a question about how many people have tested positive on the ship that was denied entry to Bonaire and Aruba, but it said, “a small number of people infected aboard the Freedom ship have been isolated from other passengers and crew.” The ship, scheduled to port in Miami on Sunday for another sailing, has 2,497 passengers and 1,112 crew members.

The cruise company said it is working with the Centers for Disease Control and Prevention and local health authorities at its destinations to determine where its boats can travel and seek alternative destinations.

“The rapid spread of the Omicron Variant may shape how some destination authorities view even a small number of cases, even when they are being managed with our vigorous protocols,” according to the company’s statement. “Some destinations have limited medical resources and are focused on managing their own local response to the variant.”

The ship is among dozens under investigation or being monitored by the CDC.

Some cruise companies have said they will alter rules in response to the rise in cases. Royal Caribbean announced it will not be accepting new bookings until Jan. 10 after dozens of people tested positive on Royal Caribbean’s Odyssey of the Seas and Symphony of the Seas, based in Florida, which has experienced a surge in cases over the past week at a greater average rate than the United States overall. The Odyssey of the Seas turned away from Curaçao and Aruba, is set to return to Fort Lauderdale on Sunday.

In the busiest time for travel in nearly two years, the omicron variant has brought about staffing problems that have contributed to flight cancellations, upending people’s get-togethers, and leading people to isolate or quarantine.

Peterson and four other Carnival Freedom passengers who spoke to The Washington Post spent much of their Christmastime avoiding public areas of their ship, unsure of how many people have tested positive or unwittingly spread the virus. One passenger from a recent voyage on the same ship, isolated in a hotel in Miami for a week because he tested positive the day after the cruise, told The Post that his six-day Caribbean vacation has become a month-long ordeal because he cannot travel home to Canada.

Sitting in her stateroom on Christmas Day, Peterson paused to listen to a PA announcement, wondering whether it would answer the questions she has about the infections onboard her ship.

“Oh, they’re just talking about the weather,” she said. “They come on every day; you think they’re going to tell us something about COVID, and it’s, ‘We’re passing by this island and the weather is 82 degrees.’ “

Cruises, which for some can be idyllic sojourns, have borne a nightmarish side of the pandemic, beginning when people on ships at the start of the pandemic spend days at sea when port after port denied permission to dock.

As the pandemic approaches its third year, cruises are embarking with precautions. Even with those, travelers have expected coronavirus-caused disruptions and potential outbreaks, alleviating risk by getting vaccinated and boosted.

The mitigation measures in place aboard Holland America Line’s ship, the Koningsdam, were “as good as it gets,” according to Paulette York, who was a passenger on the voyage that left San Diego for Mexico on Sunday. However, after 21 crew members tested positive, the boat was turned away from Mexico’s Puerto Vallarta.

York, of La Quinta, Calif., said that passengers comply with mask requirements and have tested negative, and she expressed frustration that port authorities did not allow the ship in. Still, the retiree said she enjoyed other parts of the cruise, visiting Cabo San Lucas and Mazatlán, and watching a pod of dolphins.

“Holland America is doing everything to keep us all safe,” York wrote in a message.

Travel vlogger Austin Hamawy said he expects cruises to be better prepared for a coronavirus resurgence after months of preparation.

Boarding the MSC Seashore, which reported 28 cases among 4,714 guests and crew, Hamawy noticed people were standing close to one another for long periods. He recorded a TikTok video to document the crowd gathering at the ship’s public areas.

Two days after the boat disembarked Thursday, Hamawy said he felt some symptoms of COVID-19: a sore throat and higher temperature. On Christmas, he quarantined at home in Fort Lauderdale.

“We have an extended family, and we’re all planning a big celebration, and that came to a grinding halt,” he said.

Canadian resident Brian Lucas, who disembarked the Carnival Freedom the same day Peterson boarded in Miami, also did not make it to a family Christmas gathering. The day after getting off the ship, he tested positive, extending the trip with his wife and 18-month-old daughter two weeks more than they had planned. The 34-year-old will end up paying an additional $3,000 to $4,000 to wait out his family’s isolation in Miami, he said.

Lucas canceled his next scheduled cruise in January, saying he wants masking and hand-washing to improve on ships before he cruises again.

“We thought it would be safe by now, but obviously it’s not where it needs to be,” he said. “I wouldn’t want to travel on a cruise anytime soon.”

The infections on Lucas’s trip, including the one he discovered after the voyage ended, were not disclosed to passengers on the ship’s next trip.

Carnival Freedom passenger Angie Jones, 39, said that if she had known about the cases from that previous voyage — Lucas’s trip — she would have canceled.

Time on the ship with her husband, her children, and her sister’s family has mostly been confined to their rooms since news of the outbreak that prevented the ship from visiting Bonaire and Aruba. She said they have stopped going to the theater for performances to avoid crowds — though she said there were fewer shows since the outbreak.

“Just the fear of the unknown also has ruined our Christmas cruise in so many ways,” Jones wrote in a message. 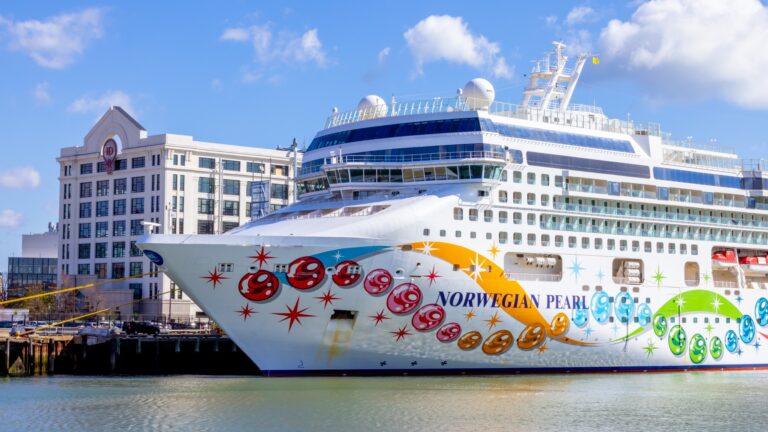 What to know about Boston's 2022 cruise season