Lufthansa, a German airline, set off confusion recently after telling passengers that they could not use trackers like Apple AirTags in checked baggage because of international guidelines for personal electronic devices. Apple rejected that interpretation Tuesday, saying its trackers comply with all regulations.

It does not appear that any other airlines are requiring passengers to turn off the trackers, which have become popular as a way to find lost baggage. Lufthansa found itself in the middle of the issue when reports surfaced in the German news media that the devices were prohibited.

Although Lufthansa said it has no desire to prohibit the devices that it deemed safe, the airline seems to have stepped in a mess based on the reading of obscure international guidelines and regulations, with no clear consensus on what is and is not allowed in Europe.

Regulators in the United States have said the trackers, which use Bluetooth technology and do not interfere with the airplanes’ communications equipment, are permitted in carry-on or checked baggage. A variety of other companies sell similar trackers, including Tile, which is popular with users of Android phones.

Lufthansa said Sunday on Twitter that the trackers must be deactivated in checked baggage on its flights, citing the International Civil Aviation Organization’s guidelines for dangerous goods as well as the trackers’ “transmission function.” Shutting off the trackers renders them useless.

The airline has not issued a specific policy prohibiting baggage trackers. Rather, it says it is at the mercy of the rules. On Tuesday, the airline said it was “in close contact with the respective institutions to find a solution as quickly as possible.” It also indicated its own examination saw no danger from their use.

“The Lufthansa Group has conducted its own risk assessment with the result that tracking devices with very low battery and transmission power in checked luggage do not pose a safety risk,” said Martin Leutke, a Lufthansa spokesperson. “We have never issued a ban on devices like that. It is on the authorities to adapt regulations that right now limit the use of these devices for airline passengers in checked luggage.”

In its statement, Apple said that AirTags are “compliant with international airline travel safety regulations for carry-on and checked baggage.”

The devices use Bluetooth Low Energy, the same technology commonly used by wireless headphones, which are permitted on flights. They are tracked by sharing their last location via a secure signal to nearby Apple devices.

Apple said the international aviation body does not have specific standards for cargo tracking devices, and its definition of personal consumer electronic devices is focused on larger devices, including phones, cameras and laptops. These tend to have larger lithium batteries.

Apple said AirTags use CR2032 coin cell batteries. These small lithium batteries are commonly used in watches and key fobs. Apple said those batteries have been approved for all baggage by the Federal Aviation Administration, the European Union Aviation Safety Agency and the International Air Transport Association, an airlines trade group.

An FAA advisory from 2017 allows devices to use low-powered wireless communication like Bluetooth on board planes in the United States. In a statement Monday, the Transportation Security Administration confirmed Apple’s view that “tracking devices are allowed in both carry-on and checked bags.”

On Tuesday, the European Union Aviation Safety Agency said that its regulation “does not in itself ban or allow devices such as the Apple AirTags.” But the agency seemed to kick the matter back to Lufthansa, saying, “It is the responsibility of operators to prohibit the use of devices which could adversely affect the flight safety or the aircraft’s systems.”

The specification on dangerous goods from the International Civil Aviation Organization says that “batteries contained in portable electronic devices should be carried as carry-on baggage,” but that if checked “the devices must be completely switched off (not in sleep or hibernation mode).” It was not immediately clear how the guidelines address the issue of Bluetooth Low Energy transmissions.

But the organization also said in a statement that it is not a regulator and “does not play an oversight role” over the airlines. Rather, its guidelines on what passengers may and may not do, and similar advice from the international trade group, trickle down to the regulators and airlines, which set policy. 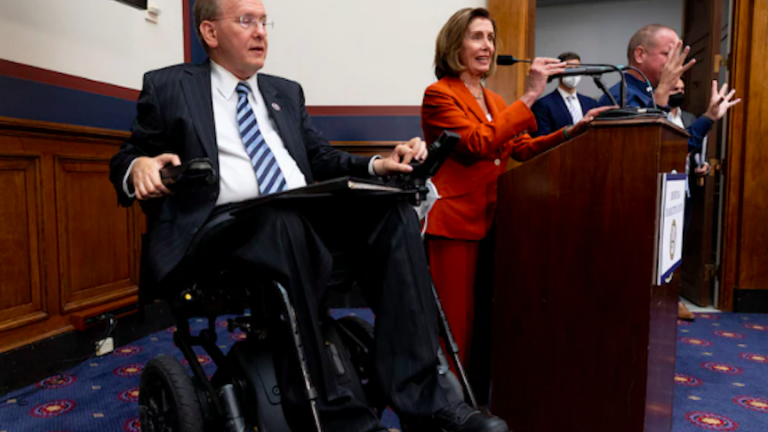 A R.I. congressman wasn’t allowed on a flight – because of his wheelchair