“The crowds are frightening.”

“This year is absolutely insane. It’s crazy. I’m like, ‘Where did all of these people come from?’”

“There were points on Saturday where the sidewalks came to a standstill, there were so many people.”

This is what some locals have to say about the unprecedented crowds Salem has been inundated with this season. During the third weekend of October, blessed by good weather and a waning pandemic, the city — population 43,350 — received 101,000 visitors on Saturday alone. By comparison, Gillette Stadium fits 65,000 at capacity.

Kieran O’Neill, 55, of Salem, co-owns and operates Olde Main Street Pub. There certainly are positives to this many tourists — most prominently, increased revenue for small businesses, many of which suffered as a result of the pandemic.

“From a business point of view, it’s fantastic, as long as you can control the people coming in and out and not overwhelm your kitchen or your staff,” O’Neill said.

“As a business owner, I’m absolutely, absolutely thrilled,” said Beth Crowley, 45, founder and owner of Witch City Walking Tours. Though the tourism can be overwhelming from a resident standpoint, from a business perspective, Crowley said she’s grateful for the way increasing numbers have allowed her to expand her business, which she started solo in 2014 and has since expanded to be a 24-employee operation.

Kate Fox, 52, executive director at Destination Salem, the city’s office of tourism and cultural affairs, pointed out that even though crowds are beneficial for some businesses, like restaurants and tourist shops, other businesses struggle.

“I hear from businesses every year that they have a hard time because locals can’t get to them to use their services. I heard the esthetician loses clients because they can’t get to her in October,” Fox said. “There used to be a jewelry store downtown and his customers wouldn’t come shopping in October.”

Even for those businesses that benefit from tourism, the crowds can sometimes be too much. With major staffing shortages, O’Neill said he’s struggling to keep up with the demand.

Alexis Lambert, 30, who works at a gift shop downtown, said the last two Saturdays have been the busiest she’s ever seen the shop.

“It got to the point where me and the rest of my coworkers had to go take a minute in the back because there were just so many people,” Lambert said.

Fox said that Destination Salem, in years past, would reassure residents that they could travel downtown in October during odd, less busy times, but now those don’t really seem to exist.

“We used to do campaigns to tell residents, ‘Come downtown, it’s safe during the week,’ and that’s almost not true anymore,” she said.

Beyond the hoards of people clogging sidewalks, crowds of this kind create a huge amount of traffic and quickly gobble up parking spaces.

In fact, during the third weekend of October, the city quite literally ran out of parking. Mayor Kimberley Driscoll said in a release sent out mid-day Saturday that people planning to visit Salem that day should park on the MBTA Newburyport/Rockport commuter rail line and travel to Salem by train, because all lots, garages, and spaces had filled up.

“Do not drive to Salem,” she said.

But Matthew Phillion, 45, a Salem resident for 20 years, said tourists usually don’t listen to these kinds of messages. He said over the years, he’s noticed the city has gotten good at putting out advisories like this one, but people ignore them.

“They put out these great informational messages about taking the T or taking the ferry… if you drive here there will be no parking, but it’s that human nature thing of, ‘Oh, that won’t happen to me,’” Phillion said.

Crowley said her company sends similar messages via text and email to every party registered for their tours. They advise arriving three hours before the tour begins, and to take public transportation or park at shuttle stops instead of driving into the city, but not everyone listens.

The traffic poses issues for residents trying to get into or out of Salem. Phillion said once you hit Route 128, you’re “doomed.”

“Salem is a small town. There’s backup on the highways for miles,” O’Neill said. “That’s the biggest issue that a lot of residents in Salem have, because they can’t get anywhere. They can’t even go out for groceries or emergencies or anything like that because trying to get back in is a nightmare.”

When Phillion ran out of trash bags last Saturday, he debated whether it would be worth it to go out for more, or if he should just “resort to old grocery bags.” He did go, experiencing “a mess of a highway.”

This many visitors clog up not only the roadways, but the town itself, which leaves some locals feeling defeated, or just stuck at home.

“It’s just really frustrating because a lot of the places that I used to like to go to and could go to are now packed. A lot of my favorite spots are so hard to enjoy because there’s a million people around,” said Alex(a) Henkelman, 24, who lives in Lowell now but grew up in Salem.

“We avoid downtown for a whole month,” said Phillion.

“There are certain places you just can’t go in October,” said Crowley.

“Just trying to walk my dog has been quite an intense experience,” said Lambert. “We avoid leaving our house at all costs on the weekend if we can, especially driving.”

Part of the issue, locals say, is that the so-called “Witch City” — which first fully embraced its connection to the historic Salem Witch Trials as a selling point for tourism in the 1970s and ’80s — is often likened to a Halloween kind of Disney World. So visitors end up with this idea that it’s going to be much larger and more well-run than it is, when in reality, it’s just a small New England town.

Kyley Dolan, 33, who lives in Salem and grew up in an adjacent town, said she dislikes this expectation that “Salem in October will be some grand, orchestrated experience.”

“Salem is not Disney World. Salem is a small city with historic infrastructure. The streets are small, the buildings are small. Salem doesn’t have the space to accommodate 80,000 extra people every day,” she said.

Sometimes it seems as though visitors don’t know that, unlike at Disney World, people actually live in Salem.

“On our tours, we go down Chestnut Street, which is the nicest street in Salem. People say, ‘Do people actually live in the houses?’ They think they’re just facades,” said Crowley.

A surprise, for both residents and visitors

Crowds have been an issue in Salem for years, but this year is apparently in a class by itself.

“I don’t think that anybody anticipated the amount of people that are coming into the city. I think everybody has been taken by surprise,” said O’Neill.

He’s heard a similar sentiment from visitors whom he talks to while working in his restaurant.

The frustration seems to be on both sides of the aisle: locals and visitors alike are bothered by the numbers.

“People said to us, ‘We can’t even get into a place to get a soda.’ They said the city is just not equipped for the number of people. There’s not enough restaurants, there’s not enough people working. So I don’t know how big it can get,” said Crowley.

Dolan blames the influx of tourism on “Halloween/witch trends on social media, ‘Hocus Pocus 2,’ and the general trendiness that Salem has garnered.” Lambert and Fox also referenced the release of “Hocus Pocus 2”; though none of it was actually filmed in Salem, it may have put Salem back on people’s minds and thus back on their maps.

Others think it may be related to the pandemic, and the “lost” years of 2020 and 2021, though Phillion and Fox said many still visited during the last two autumns.

Regardless, Henkelman has noticed a change in the clientele Salem attracts.

“A lot of the people who used to come to Salem were really into Halloween, really into Salem. They would dress up and do all of these crazy costumes, but this year, I noticed, there are so many people here who aren’t wearing costumes,” Henkelman said.

Henkelman, who has been a tour guide with the Salem Wax Museum for four years, has observed an accompanying attitude shift.

“It seems like they want to say they went to Salem as just a check on their bucket list,” Henkelman said. 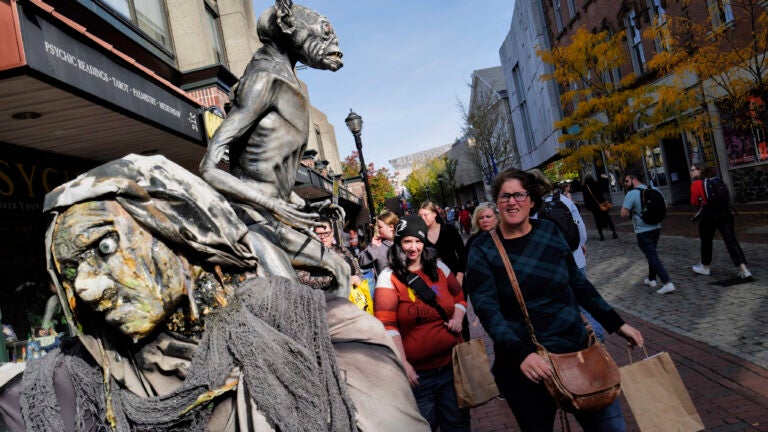