Every year after the Boston Marathon, James Hooley, the chief of Boston Medical Services, and his colleagues begin a review of how things were handled so they can adjust, adapt, and improve.

Brendan Kearney, the department’s superintendent in chief, says it starts right after the race.

“Just a couple weeks after the race, there will be a regular after-action – how did it go, what worked, what didn’t. I think a lot of people think that everything’s the same, but every year there’s something different about it, either security plans, or different patient treatments. And then everything we learn at the Marathon we incorporate into our other plans,’’ he said.

Part of this year’s review included listening to the radio traffic among EMS personnel assigned to the finish line area while watching a video recorded by Boston.com’s Steve Silva, who was filming runners when two bombs exploded on Boylston Street. Silva continued to record the aftermath and scenes from Boylston Street as emergency personnel responded.

Boston.com provided six minutes of Silva’s footage to Boston EMS so a video could be synchronized with the audio of the radio traffic and used for reviewing the events and for future training sessions.

“A lot of people just had so many mental gaps about what happened, that’s why they wanted to hear the tape and once they hear the tape, a lot of it came back,’’ Kearney said.

In turn, Boston EMS has provided Boston.com with the finished video embedded at the top of this story to share with readers and provide a unique look at the emergency response at the Boston Marathon. The audio is of one radio channel used by Boston EMS’s emergency medical technicians, paramedics, physicians, and supervisors who were assigned to the Marathon. It does not include police officers, firefighters, or other emergency personnel who were covering the rest of the city during the Marathon.

“I think everybody just kind of kicked in their training and experience. They knew bombs went off. I did. After the first one, I thought that was loud, and not expected, and then the second one. So everybody knew what was going on,’’ said Kearney, who served as the operations officer on Marathon day and was on Arlington Street when the explosions occurred.

Kearney also sat down with Boston.com to review the video and audio and provide more detail about what is heard. Here are some key points and their approximate times on the video embedded atop this story.

:33 – The first radio transmission is heard.

“Zone 1 is Copley Square, so the person overseeing Zone 1 (deputy superintendent Mike Bosse, in this case) is calling the UCC, which is the Unified Command Center at Boston Police headquarters, where we have police, fire, EMS representatives all watching monitors and things,’’ Kearney said.

Personnel on the ground at Boylston Street then transmit details such as “two separate devices’’ and instructions to be cautious.

1:27 – After a short period that included transmissions that are difficult to interpret, likely because of several transmissions at once as paramedics are responding to the blast locations, other EMS personnel who are not already on-site are told to hold their positions, first by Captain Bob Haley, who used the call sign “logistics,’’ then repeated by a dispatcher, who is referred to by the call sign “tactical.’’

“It’s just letting everyone know to hold their positions while we do an assessment,’’ Kearney said.

1:57 – Crews are told to return to their vehicles at the Alpha staging area, which is the main medical tent, and await assignment.

“Because we have the incident command system in place, so we have the incident commander, the logistics person, that was a staging officer who’s overseeing where all the ambulances are pre-deployed at the Alpha tent, which is the main medical tent at Copley Square,’’ Kearney said. “All of these designations were already in place, who was overseeing which areas, which really speeded up the response and helped coordinate it.

2:04 – “Zone 1 calling tactical. Prepare to receive patients at the Alpha tent,’’ is heard. Tactical is the call sign for the dispatcher. The speaker is the Zone 1 supervisor, Bosse.

“Patients are already being moved up to the main medical tent,’’ Kearney said.

The medical tent personnel then confirm they are receiving injured people.

2:32 – The incident commander, in this case Boston EMS Chief James Hooley, alerts the dispatcher that they have identified casualties, and while they do not know how many, that area hospitals should be alerted for the possibility of it being “a mass casualty event.’’

3:10 – More information is conveyed about the extent and location of people with injuries.

3:35 – A request for more ambulances to respond to specific locations is heard. BLS is an acronym for a basic life support vehicle, or ambulance.

4:32 – Incident commander Hooley asks the dispatcher to deploy more resources to bring triage tags to the scene. He also provides information that at least 40 patients are in need of care.

5:24 – Another supervisor reports another area where injured people need care, and the dispatcher seeks and finds a unit to respond. This is the result of patients being discovered at locations away from the primary scene. They have likely moved there under their own power to get away from the finish line area, Kearney explained.

End of video – As this video concludes, the final words heard are from an EMT staffer at a first-aid station at Boylston and Hereford. The Hotel 2 call sign used here was predetermined, possibly because of the location on Hereford.

Several other actions are important to note but not evident just by watching and hearing the video, Kearney said. They are:

■ About one minute after the first explosion, a notification was sent via WebEOC, a web-based program monitored by command posts in communities along the route, MEMA, Public Health & Hospital that an explosion has occurred near the finish line.

■ About three minutes after the explosions, and right after Chief James Hooley’s update, Boston EMS personnel at Dispatch Operations sent a radio alert to all Boston hospital emergency departments advising of an explosion at the Marathon finish line, and to prepare for a mass casualty incident.

In all, about 100 Boston EMS personnel worked the scene from Brighton to the finish line, Kearney said. Their speedy response, poise, and professionalism continues to impress him.

“A lot of it is just the day-to-day using of radio procedures and call signs and pre-designating the incident command, even on smaller incidents, so people are just used to it,’’ he said. “Then when something like this happens, it just expands. People are used to it. There’s not a lot of ‘OK, who is going to oversee loading, where do I take the patients. Everybody just kind of knows’.’’ 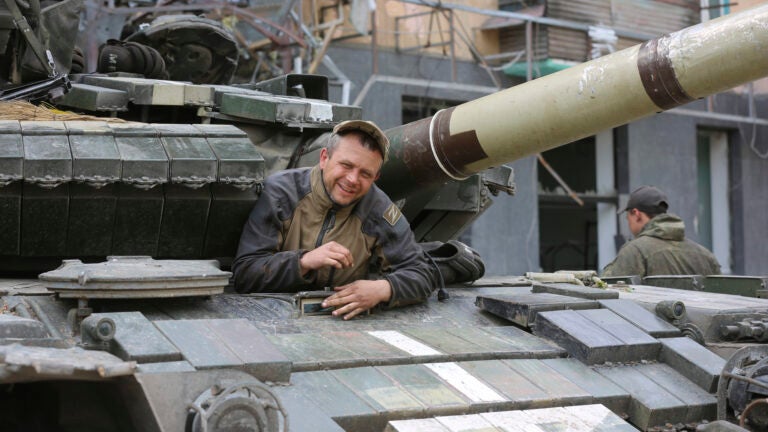