In the three days since we first wrote about the Entourage poster that’s been locked in a frame in an Indian restaurant for the past five years, some new outlets such as Vox, Entertainment Weekly and Mashable have spread the tragic tale of the poster that won’t die.

Many readers asked questions: Why doesn’t the owner just break the glass? Why doesn’t he unscrew the frame from the wall? Who cares about some poster in an Indian restaurant?

Boston.com cares, which is why we contacted several repairmen to determine how much it might cost to remove the poster.

First, some logistics. The poster hangs in a frame that is bolted to the wall directly behind the host stand. India Castle’s owner, Rabhbir Singh, said it used to light up, which leads us to believe electrical wires were manipulated. The box unlocks with a key, which a local TV representative took with him after he installed the poster.

But how to remove the curse?

If Singh wants to spend just a little money, he could hire a locksmith to make a new key. An employee of Commonwealth Lock Company in Cambridge said it would cost between $10 and $15 to get a new key and a few spares. It wouldn’t get rid of the box, but Singh could hang up restaurant specials or a more relevant poster.

Say Singh really wants to get rid of the box and is willing to spend a little more money. He might hire a handyman to remove it with some power tools and spackling, which may or may not entomb some live wires in his walls. A spokesman from “The Super’’ home repair company in Cambridge said that simply removing a movie-sized poster from a box bolted to the wall would cost between $70 and $100.

But if Singh wants to obliterate every last trace of the fine art, he might need to pay Vince Chase-levels of cash. An employee of Leighton Construction LLC said that he’d need to attempt to detach the poster to know the true cost of removing it, but that it could involve rerouting electrical wires.

“If it’s an electrical service, that’ll up the price,’’ he said. “Then you have to factor in repairing the wall, repainting it, disposing of the waste. There are a lot of variables, but the most it could cost is $2,500.’’

Adding to the plight and reasons to remove the poster is the fact that HBO yanked the syndicated version of the show after less than a year. To make things worse, the new Entourage movie has been getting slammed in reviews and made a “weak’’ $17.8 million at the box office since opening Wednesday.

Then again, the poster has become such a fixture in the restaurant that Singh had all but forgotten it was there until a Boston.com reporter asked him about it last week.

Maybe Entourage executive producer Mark Wahlberg could do a favor for a fellow Bostonian and kick in between $10 to $2,500 to end this curse once and for all. 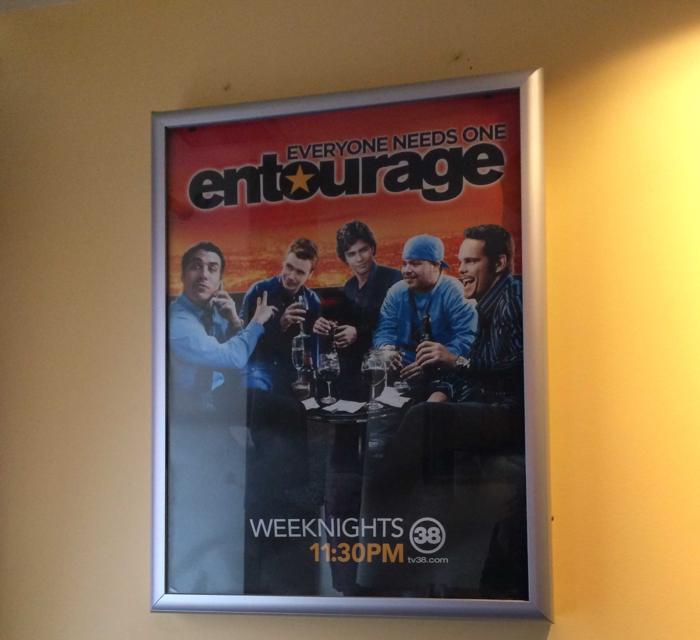 A church is home for a Hatfield husband and wife