Less than two weeks after Hurricane Harvey’s destruction left meteorologists grasping for words, Hurricane Irma again has the field at a loss.

The Category 5 hurricane hit the Caribbean with record force Wednesday morning, flooding communities, destroying buildings, and knocking out communications across the chain of islands, according to the Associated Press. With sustained winds of 185 mph, Irma is already the strongest Atlantic hurricane ever recorded and one of the strongest in recorded history.

I am at a complete and utter loss for words looking at Irma’s appearance on satellite imagery. pic.twitter.com/B0ewFyvcSv

#Irma has now maintained 185 mph winds for 24 hours – no Atlantic or eastern Pacific #hurricane has ever stayed this strong for so long. pic.twitter.com/8XyNsFkrpU

With the United States just beginning to grapple with Harvey’s destruction, forecasters are scrambling to determine where — and how hard — Irma will hit next.

According to the National Weather Service’s National Hurricane Center, Irma is likely to remain a very powerful hurricane over the next three or four days as it continues over warm waters and “favorable atmospheric conditions.” 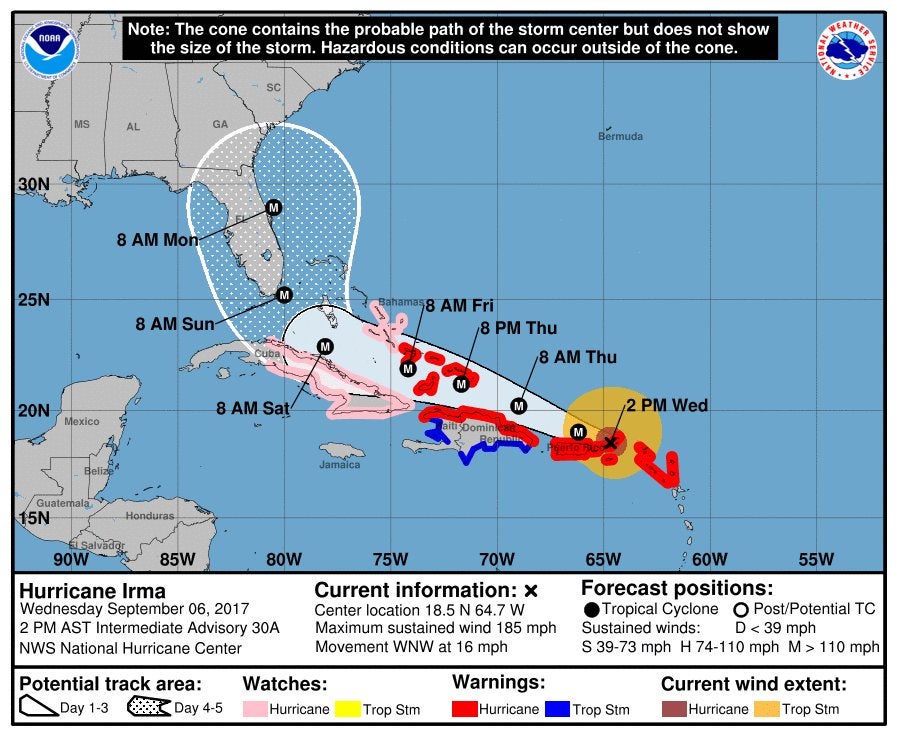 “Irma is a potentially catastrophic category 5 hurricane and will bring life-threatening wind, storm surge, and rainfall hazards to portions of the northern Leeward Islands, including the Virgin Islands and Puerto Rico today,” the center warned Wednesday morning.

NHC meteorologists say Irma possibly will impact the United States later this week or this weekend, although it was too soon Wednesday to “specify the location and magnitude of these impacts.” In a piece Tuesday, meteorologist David Epstein wrote that Irma’s impact on the United States — and even New England — depends on when in its path the storm makes its turn north.

9/6 2pm: Latest estimates of when tropical-storm-force winds could arrive & are most likely to arrive with #Irma https://t.co/tW4KeGdBFb pic.twitter.com/IrntA1wIBD

For now what is certain about Irma has already astonished those in the meteorological field. At times, the powerful storm’s eye completely engulfed some Caribbean islands.

Always surreal to see the eye of a hurricane completely engulf an island. Saint Martin fit precisely inside a short while ago. #Irma pic.twitter.com/fcmfuOcqlR

The eye of a hurricane actually contains relatively calm weather. However, the eyewall is the region with the storm’s most destructive power.

Prayers for these islands. They’ve never seen a storm this strong in recorded history. #Irma pic.twitter.com/U3LvWT2v2j

Saint-Martin and Anguilla appear to have taken a direct hit by cat 5 Hurricane #Irma. #GOES16 pic.twitter.com/1CN1JL0GEC

3D radar volume from San Juan, PR at 103 pm showing “stadium effect” in the eye of #Irma over the British Virgin Islands. Thanks @NWSRaleigh pic.twitter.com/YmGwR00bP1

And while Irma’s occurrence itself would alone be newsworthy, its place in a rarely seen succession of powerful hurricanes has made this season even more notable.

Only twice on record has Atlantic had two consecutive named storms make US landfall as major hurricanes: 1893 & Ivan, Jeanne in 2004. #Irma pic.twitter.com/oFMdtCXJ5l

However, compared to Jose or Katia, Irma stands out as a force.

The eye of the storm could be distinctly seen from space Wednesday.