The nor’easter that is expected to batter Massachusetts Friday and Saturday has already pulled down trees and power lines and caused significant flooding along the coast and in Boston.

Forecasters with the National Weather Service are warning that if you’re venturing out to see the storm that coastal flooding should be observed from a “safe location/distance.”

“At this point you should NOT be driving through flood waters, and it is not recommended to go out on beaches, sea walls, jetties, rock piers, etc. to observe coastal flooding,” they wrote.

At this point you should NOT be driving through flood waters, and it is not recommended to go out on beaches, sea walls, jetties, rock piers, etc. to observe coastal flooding; if you are observing coastal flooding, please do so from a safe location / distance

Photos and videos of the major coastal storm shared to social media show waves crashing over seawalls and streets flooding from Plymouth to Scituate to Plum Island:

Thursday homeowners in Sandwich trucked in tons of sand to protect their homes. The approaching tide is already washing those piles away. @boston25 pic.twitter.com/PbioM42iRU

Plymouth Rock at the moment. pic.twitter.com/HycJLeqKv5

The road to Plum Island is shut down as high tide approaches. #7News pic.twitter.com/tC5AYwKnSj

And there it is…high tide in Marshfield right now. Natl Guard at the ready for water rescues – lots of flooded roads pic.twitter.com/wYxxNIKhI9

High tide on Boston Harbor and Seaport Boulevard is taking the brunt. pic.twitter.com/d5YsEaCZ85

Getting worse in #Scituate. Homes not visible at times from waves. People in this area have left! @7News pic.twitter.com/n08MmZGbDL

Wind from #NorEaster2018 is ripping the siding off this home in Winthrop. #wcvb #mawx pic.twitter.com/yCoaQKaS2E

Amazing video of SIX small children being rescued from floodwaters in the Post Island Road area of Quincy on a front end loader. Two of them were infants. Mom and children all appeared to be OK. pic.twitter.com/TqzJo4EwcJ

#NFD crews off on Solon St. with this tree into a house. No injuries. @EversourceMA notified. Remember no downed lines are safe, call 911. pic.twitter.com/CMmPhy8EUm

The condition of this sign has closed the Willard St access off Furnace Brook rotary (headed towards E Milton Square). pic.twitter.com/9NscVhFloG

That ocean is still looking mean this morning along the North Shore & elsewhere on the coast. Huge waves continue to send water into #Nahant communities & have shut down the causeway #Boston25 pic.twitter.com/jNGW2cnr2F

I am told this porch used to be attached to this Sandwich home on the left. Wild winds and powerful waves knocked it away. @7News pic.twitter.com/7zIOFu1rIg

Residents of Marshfield MA watch as the 3rd and final high tide of the storm rolls in. @wbur pic.twitter.com/k7DgY88iUb

Waves coming up from underneath the dock pic.twitter.com/SJygdm06IA

Seven trees fell in this yard in Sandwich, including five that hit the house. Nobody inside at the time, a neighbor says. #WCVB pic.twitter.com/d7c1LK1x9t

A look at the waves in #Scituate during high tide @7News pic.twitter.com/0mC8CmP2za 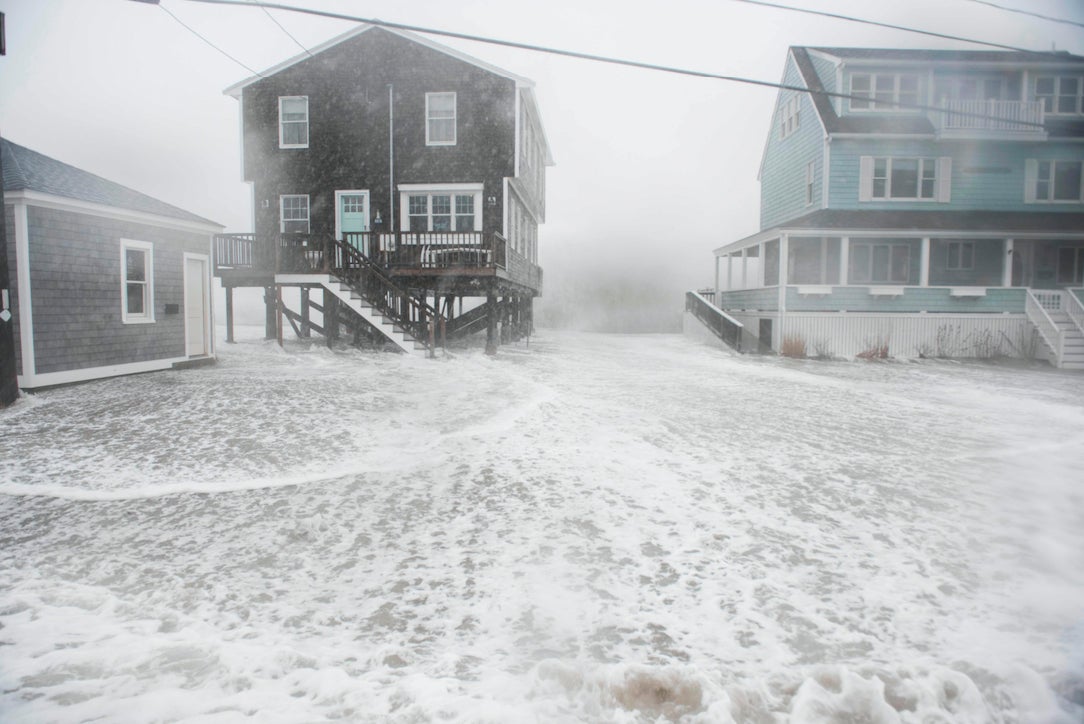 Live updates: The very latest on the March nor'easter