While many rejoiced over this weekend’s balmy interlude, which marked the first time Boston has seen back-to-back 70-degree days in January since records began in 1872, a few found it cause for concern.

“One of the impacts of climate change that scientists have been predicting over the decades is that we will see anomalous weather events,” said Sarah Finnie Robinson, a senior fellow at the Boston University Institute for Sustainable Energy who specializes in climate change communication.

And the heat spike people felt this weekend would certainly qualify as anomalous — it wasn’t supposed to come for another four months. As the National Weather Service tweeted on Saturday, “The high of 70°F in #Boston is the normal high for May 27.”

Robinson said we need to remind ourselves of the difference between climate change and everyday weather, offering the metaphor that, “Weather is the mood you’re in. Climate change is your overall personality.”

So while this past weekend’s temperatures weren’t something we’ll necessarily see on a regular basis, she said, they were linked to “completely unmistakable global warming trends.”

Robinson, the founding director of The 51 Percent Project, an initiative that focuses on improving conversations around global warming, said there will always be a few people who doubt these rising temperatures are the result of human behavior — behavior that could be changed. She explained that factors contributing to the reticence around climate change conversations include polarization of the issue, the expenses surrounding changing it, its extremity, and more.

“It’s scary,” she said. “We’ve all known about this for decades and done nothing. That’s the anger that I sense on the streets. That’s palpable.”

Yet about 63 percent of Americans say they rarely or never discuss global warming with family and friends, while only 37 percent say they occasionally or often discuss it, according to a 2019 Yale and George Mason University study.

With people now experiencing heat waves during winter firsthand, though, Robinson said she hopes the anomaly will lead to a rise in public awareness and a larger conversation.

This year “could easily be the warmest year on record,” she said, adding that she believes there may be more warm weather in the city’s future, too.

“It’s great to bring a reusable mug to work and to walk that talk … but really what we need is a systemic comprehensive shift to a clean energy plan.”

And going forward, she said Bostonians should continue creating conversations around the issue.

“We should be concerned,” Robinson said. “But more important than that we should take action.”

Here’s how some local residents marked the unusual weather with their social media conversations this weekend:

It hit 73° at Logan Airport earlier, making today the warmest January day in Boston in recorded history. Also the first time Boston has experienced back-to-back 70°+ days in January, and only the fourth time temperatures have hit 70 degrees or more in January since record keeping began in 1872. The previous January record was 72° set back in 1950. This was the scene earlier on the Common. #boston #igersboston #igboston #bostondotcom #bostonusa #igersnewengland #bostonweather

70 degrees- way too warm for Boston in the winter. 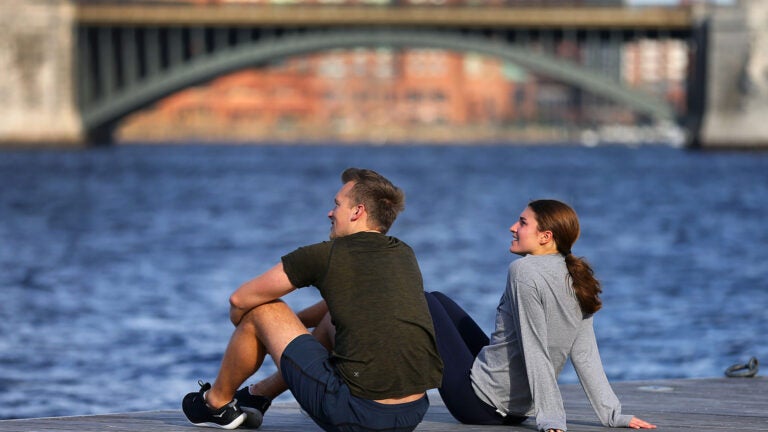