In the Lake Charles region, dotted with chemical plants and oil and gas refineries, trouble began early Thursday at a BioLab plant that manufacturers chlorine for swimming pools and disinfectants. An unknown amount of chlorine began to decompose sometime during the storm, generating heat and sparking a fire, Louisiana State Police Superintendent Kevin Reeves told reporters, adding that the cause was under investigation. He said a small crew from BioLab tried to extinguish the flames before calling state police for help shortly before 10 a.m. local time as black clouds billowed from the plant.

The plumes carried an unknown amount of chlorine gas, he said. Chlorine gas can be toxic and cause blistering of the skin, burning sensations in the nose and throat and respiratory distress. Local fire crews rushed to the scene, Louisiana Department of Environmental Quality hurriedly installed air-quality monitors, and the Environmental Protection Agency scrambled a plane to monitor the situation from the air. Early indications of chlorine in the air outside the plant were negative, said Gregory Langley, a spokesman for the Louisiana Department of Environmental Quality.

BioLab is owned by Toronto-based KIK Corp. KIK general counsel Isabelle Pierre said the company sent specialized teams to work with local authorities. The company said it hoped to “contain and mitigate the impact of this incident as quickly as possible.”

It was the most vivid example of environmental damage resulting from Hurricane Laura, a Category 4 storm packing 150 mph winds that pummeled its way through a section of the Gulf Coast region that is home to petrochemical plants, Superfund sites, half the nation’s refineries, oil and gas wells, and a network of pipelines. While some major oil producers, including Exxon, said their facilities were untouched by the storm, other companies were still assessing Thursday whether they had sustained damage.

On oil markets, most traders were not concerned about the effect of the hurricane. “The market is really shrugging this off,” said Jeff Mower of S&P Global. From last Friday through Tuesday, prices for gasoline to be delivered in September climbed 11 cents. Since Tuesday, they’ve dropped 10 cents, Mower said.

But from an environmental standpoint, there were still questions about the security of oil, gas and chemical plants during hurricanes that promise to become wetter, more powerful and more frequent as a result of climate change.

In 2017, Hurricane Harvey caused a chemical plant in Crosby, Texas, to lose power, igniting a fire and a large pillar of acrid, black smoke at a French-owned Arkema plant. Residents within a 1.5 mile radius were evacuated.

Many oil refineries also reported that they released gases way beyond regulated limits as they shut down in preparation before Hurricane Laura struck.

One was Motiva Enterprises in Port Arthur, Texas, the biggest refinery in the country and owned by Saudi Aramco. The plant released benzene, hydrogen sulfide and volatile organic compounds all beyond legal limits earlier this week, the company said in a filing with the Texas Commission on Environmental Quality. The company said contaminants also leaked to the ground, and that the process line had to be blocked and the material spilled had to be collected with booms.

Marathon Petroleum reported that as many as 14 contaminants were flared at nine different parts of its Galveston Bay refinery as it prepared for the hurricane. The company said it was because of “potential shutdown due to Hurricane Laura.”

“It is familiar yet more egregious,” said Gerald Poje, a former board member of the federal Chemical Safety Board. “It is implausible for anybody to argue that they couldn’t have foreseen danger coming with Hurricane Laura. What do the words ‘safely shut down’ mean to the chemical industry?” he said. “We may not have learned what we should have learned from events over and over and over again.”

The threat isn’t just on land. When Hurricanes Rita and Katrina swept through the Gulf in 2005, they damaged at least 115 oil and gas production platforms in the deep ocean before they hit land, according to the Bureau of Ocean Energy Management.

A year before, Hurricane Ivan triggered an underwater avalanche that knocked down a Gulf platform and caused what eventually became the largest offshore oil spill in history after the BP Deepwater Horizon disaster. Taylor Energy’s oil platform broke away from more than two dozen wells, allowing the oil they produced to spew. The unplugged spill is about to enter its 16th year, amounting to millions of gallons.

This year, the fire at the BioLab facility, which had been evacuated when the hurricane was upgraded to Category 4, has been the focus of attention.

The company provided no information about the chemicals being stored and manufactured there.

But in a published interview in 2017, the BioLab plant manager said the 15-acre facility made “trichloroisocyanuric acid, chlorinating granules and other specialty blends” for disinfecting pools and spas.

Those can be dangerous. The New Jersey health department warns about trichloroisocyanuric acid online, cautioning that “POISONOUS GASES ARE PRODUCED IN FIRE” involving the acid, including chlorine and nitrogen trichloride, and that “CONTAINERS MAY EXPLODE IN FIRE.”

The warning also says that “”Inhaling trichloroisocyanuric acid can irritate the nose, throat and lungs causing coughing, wheezing and/or shortness of breath” and that “contact can irritate and burn the skin and eyes.”

Louisiana state officials told reporters at a media briefing that there had been no reports of injuries related to the BioLab fire.

BioLab also stores sodium hydroxide, or caustic soda, at its Lake Charles facility, according to Jim Vallette, co-founder of Material Research, which works with nonprofit groups. That material had to be safely stored in a dry place. The National Library of Medicine’s website says that “at room temperature, sodium hydroxide is a white crystalline odorless solid that absorbs moisture from the air.” But “when dissolved in water . . . it liberates substantial heat, which may be sufficient to ignite combustible materials.”

The BioLab site in Louisiana receives chlorine by pipeline from nearby Westlake Chemicals. It also has released thousands of pounds of chlorine into the air in violation of regulatory limits, Vallette said, citing the government’s Toxic Release Inventory.

In 2018, the plant was one of the top 20 sources of chlorine air releases in the country.

The company, which makes Clorox Pool&Spa and its own Pool Time and Pool Essentials brands, has had a fire before. In 2004, a fire broke out at a BioLab warehouse in Georgia, setting off several explosions and forcing the evacuation of hundreds of residents within a 1.5 mile radius of Conyers, 20 miles east of Atlanta.

A similar problem might have been to blame three decades ago with a different swimming pool disinfectant company in Springfield, Mass. Rain leaked into an 87-year-old industrial building housing the company, which produced water treatment chemicals for swimming pools. The rain along with heat ignited ordinary materials, triggering the release of large amounts of chlorine gas and the evacuation of more than 6,000 people.

Tom Hoefer, communications director of Calcasieu Parish, La., said he drove around Thursday morning surveying the damage, and at one point passed directly through the smoke of the chemical fire at the BioLab manufacturing plant outside Lake Charles. Hoefer said his office has been getting calls from evacuees eager to return, but he urged them to await further instructions from authorities. “Soon,” he said, “but we’re not ready yet.”

The Washington Post’s Nick Miroff contributed to this report. 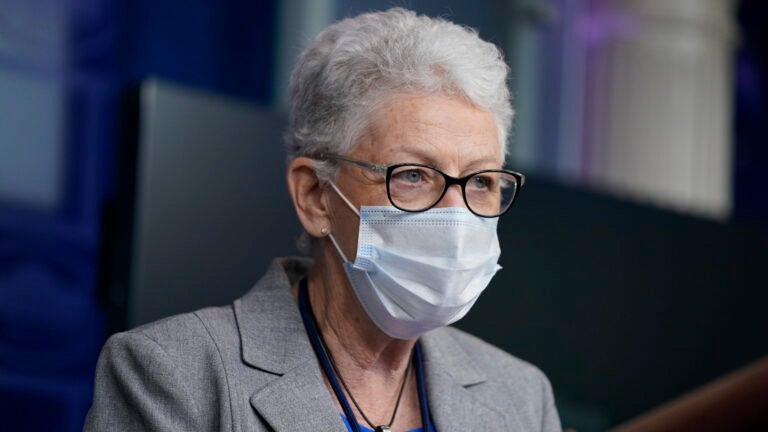