As a nor’easter tore through Massachusetts Monday into Tuesday, dumping over a foot of snow in some areas, it caused widespread power outages and slick roadways.

A map from the National Weather Service shows vast differences in reported snow totals as of 4 a.m. Tuesday. Some areas, like Cambridge, only received 2.4 inches of snow, while Wilmington measured 20 inches.

[4 AM Observed Snow Totals] Latest observed snow totals based off YOUR snow reports! Help us fill this map in with your snow reports and your location (city/town). pic.twitter.com/lMxsOywyQv

As of around 9:15 a.m. Tuesday, over 5,100 customers were without electricity, according to the Massachusetts Emergency Management Agency. The outages were scattered all over the state map, with Newbury appearing to be one of the worst hit places — between 25 and 50 percent of customers were without power — along with Salisbury, which had between 10 and 25 percent of customers without. There were also concentrations of outages around the Greater Boston region and on Cape Cod.

As for the wind, the max wind gust in Wellfleet measured 71 mph, according to the weather service. Other areas also measured extreme wind gusts — 60 mph in Provincetown, 65 mph in Rockport, and 59 mph in Duxbury.

The storm, and slippery roads, also appeared to cause a car to go into a building in Belmont. The town’s fire department shared photos on Twitter of an SUV that had crashed into the front of Art’s Specialties.

“Slick road conditions have caused several crashes this evening,” the fire department said. “Please stay off the roads unless necessary.”

No one was injured in the crash, according to The Boston Globe.

“We have a lot of work to do the rest of the day,” Gulliver told the news station. “I expect crews out for most of the day today.” 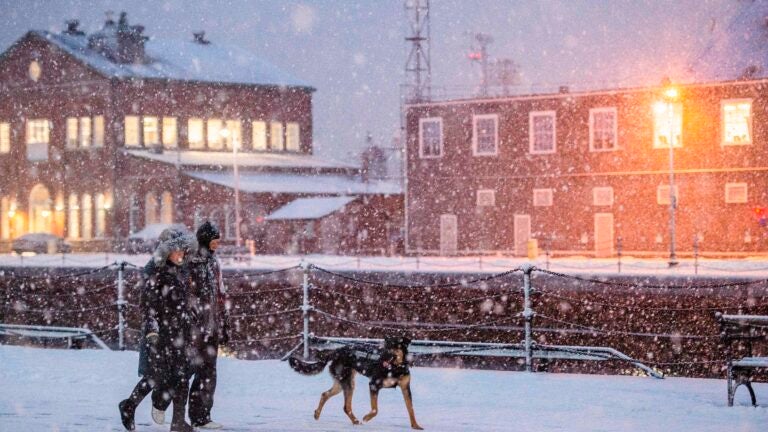 Map: Here’s how much snow has been reported across Massachusetts