The snowstorm that brought travel to a halt in the Mid-Atlantic and Northeast this week may have set a state record for the most snow in a single day in New Jersey, with numerous reports of snow totals between 25 and 35 inches.

Blockbuster winter storms, which unload such prodigious amounts of snow, may be increasing in a warming world. The evidence started accumulating in the 1990s, and observations from snowstorms this winter add new weight to this counterintuitive idea.

The nor’easter that ended on Groundhog Day this week dumped 35.1 inches of snow in Mount Arlington in north central New Jersey, about 40 miles west of New York City, according to a report received by the National Weather Service. If validated, it would break the New Jersey state record for the biggest multiday snowstorm. The existing record of 34 inches was set at Oak Ridge Reservoir in December 1947.

But Dean Iovino, a meteorologist at the Weather Service office in Mount Holly, N.J., said there are questions about how the snow was measured in Mount Arlington, which make the observation “suspect.” He said the Weather Service, the New Jersey state climatology office and other organizations will review the measurement.

Nevertheless, the Weather Service received more than 20 reports of at least 28.5 inches from Morris, Sussex, and Warren counties, any of which would earn a spot among New Jersey’s top 10 biggest multiday snow totals.

In December, the season’s other significant winter storm dumped even more snow farther inland, possibly setting a 24-hour snowfall record in Pennsylvania, with 43.3 inches in the town of Alba, as well as in Vermont, where 44 inches were measured south of Ludlow. Peak snowfall totals from that event exceeded 40 inches in four states: Pennsylvania, New York, Vermont and New Hampshire. At times, snow fell at extreme rates of five to six inches per hour.

Recent years have brought other snowfall records to the Mid-Atlantic and Northeast. For example, Connecticut set a 24-hour snowfall record during a 2013 winter storm, when 36 inches fell in Ansonia.

Since the 1990s, major megalopolis cities from Washington to Boston all have been slammed by a disproportionate number of mega-snowstorms. For example, seven of New York City’s 10 biggest snowstorms in records dating to the late 1800s have occurred since 1990. The 17.4 inches that fell earlier this week tied for the 15th biggest and was less than an inch from cracking the top 10.

While not every winter weather event is a blockbuster, meteorologists are starting to notice what is at least anecdotal evidence of more frequent large snowstorms during the past decade or so, and wonder whether there is a climate change connection.

Studies already have shown that precipitation is falling in heavier bursts as the climate warms, a result of the ability of milder air to hold more water vapor. Winter is warming faster than any other season. For each 1.8-degree increase in temperatures, the air can hold about 7% more moisture, which is known in physics as the Clausius-Clapeyron relationship. This means that as the atmosphere warms, there’s more water for storms to wring out in the form of rain and snow.

“I absolutely believe there is the potential for ongoing, perhaps enhanced, snowstorms in the Northeast in the next few decades,” wrote Dave Robinson, the New Jersey state climatologist and director of the Global Snow Lab at Rutgers University.

Studies have shown that, due to climate change, extreme precipitation events are becoming both more common and severe, with implications for infrastructure, flood insurance markets and more. When it is cold enough to snow, there’s a likelihood of heavier snowfall rates as well, though the scientific literature is sparse when it comes to whether snowfall rates and totals already are trending upward over time.

Ken Kunkel, a senior scientist with the North Carolina Institute for Climate Studies, has studied shifting extreme precipitation trends in the U.S. for more than 20 years. A study he led in 2009 found an increasing trend of high snowfall seasons along the East Coast, as well as the emergence of a feast-or-famine pattern, in which winters either over-deliver snow or underperform relative to the seasonal average.

He said the physics involved in generating heavy snow suggest that climate change could be a factor in recent heavy snowstorms, given that the biggest snowfalls tend to occur when the air is near freezing, which enables the air to hold more moisture. A complicating factor, though, is that increasing air temperatures may be making what 20 years ago would have been a snowstorm into a cold rainstorm.

“The oceans have been warming overall,” he said. “These storms are deriving their moisture from the Atlantic and more moisture is being brought into these storms. That certainly is a big component of it.”

Recent examinations of snowfall data by the research and media group Climate Central found that snowfall is increasing in some Northeastern cities, including New York City, Hartford and Boston. But this is occurring mainly in the winter months, when it’s cold enough for snow, while snow totals have barely moved in the fall and spring as temperatures increase and are more marginal for supporting snow.

Such an outcome is highlighted in the most recent National Climate Assessment, released in 2018, that found “As Northeast winters warm, scenarios project a combination of less early winter snowfall and earlier snowmelt, leading to a shorter snow season.”

That report, produced by federal science agencies and outside experts, found that heavy precipitation events have increased in the Northeast by 55% since 1958, with further increases projected as the climate continues to warm.

Ryan Hanrahan, chief meteorologist for NBC Connecticut in Hartford, said he suspects warming air and sea temperatures may be priming the atmosphere for heavier snow. Right now, for example, sea surface temperatures off the coast of Delaware, New Jersey and Long Island, which are source regions for nor’easters to pick up moisture from and dump inland in the form of snow, are running up to three degrees above average.

“We seem to be seeing fewer small and medium size events and more big ones or blockbuster storms,” Hanrahan said in an email. “The actual amount of snow we get in a season doesn’t seem to be changing but we’re getting most of it in these larger storms as opposed to more smaller events in a season.

“One possible reason for this, I hypothesize, is warmer sea surface temperatures offshore helping to energize storms more than we’ve seen in the past. Also warmer [sea surface temperatures] and a warmer atmosphere overall is loading these systems with moisture, giving us excessive snowfall rates and totals,” he said.

“[It’s] hard to know if the past decade has been a fluke or if it’s something that we’ll see more of in the coming years. If you love big snowstorms like I do the last 10 years have been pretty remarkable,” he said.

“I would have killed for winters like this as a kid growing up in Connecticut.” 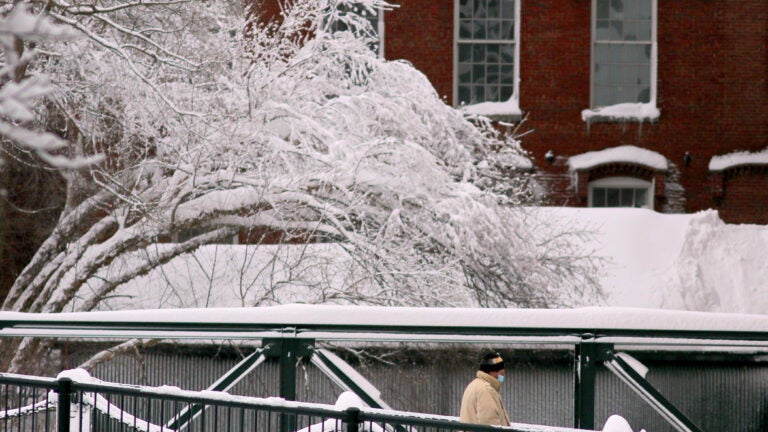 Here’s which Mass. community saw the most massive snowfall during this week’s nor’easter