March is typically one of the wettest months of the year, and yet the start of March 2021 has been unusually dry and sunny. It’s been cold the past several days, and the weekend averaged below normal for seasonal temperatures.

Now the weather is undergoing a bit of a change, and we’re going to start enjoying some serious spring.

By the middle of the upcoming week, we’ll have to start turning our eyes towards the possibility of record-breaking warmth. It appears right now that Thursday is our best chance for setting new records in at least one or two of the major climate sites in Southern New England.

In Boston and Providence, the record on Thursday goes back to 1990 when it reached 67 and 71 degrees, respectively. In Worcester, the record of 71 degrees is older and was set back in 1977 and Hartford’s 75 degrees that was set in the same year, is unlikely to be broken.

Before we get to the super warmth in the middle of the week, we’ll have to have a slow warm up during Monday. Most areas will reach right around 40 degrees in the afternoon after our cold start.

The warmth will arrive behind two frontal systems, one Monday night and another Tuesday night. There is an outside chance of a little bit of precipitation with these frontal systems, but if it occurs, it won’t be a big deal. In other words, the dry weather rolls on all week as temperatures head upward.

It’s likely we’re going to have to wait until Friday night or Saturday, when the end of the warm weather arrives with a cold front. This frontal system is likely to bring at least a few showers and a return to more seasonable temperatures over the weekend.

There’s not a lot of snow cover left on the ground and many areas, but when that storm set up last month, areas around Metro West did see some heavy snow banding, and that now remains a dense mass of white crust stuck to the ground.

The high density of the snow makes it difficult to melt, and so it’s still going to take several more days before we are rid of it. The energy from the Sun will first go into softening the snow. And then once the snow is ripe, it will begin to melt more quickly.

You can kind of see where the coastal front set up during the last big storm in February. That’s where there is still that swath of snow from northern Worcester county southeastward. Will take until midweek to melt it. pic.twitter.com/XQl3yDQg8m

Finally, in spite of the warm weather coming this week there are still signs of some cold and even possible snow in the third week of the month. Of course, this might not happen, but I would not consider us completely done with wintry weather just yet.

The image below shows a small sign of wintry weather right around the Ides of March. Let’s see if we really need to beware of it once we get closer. 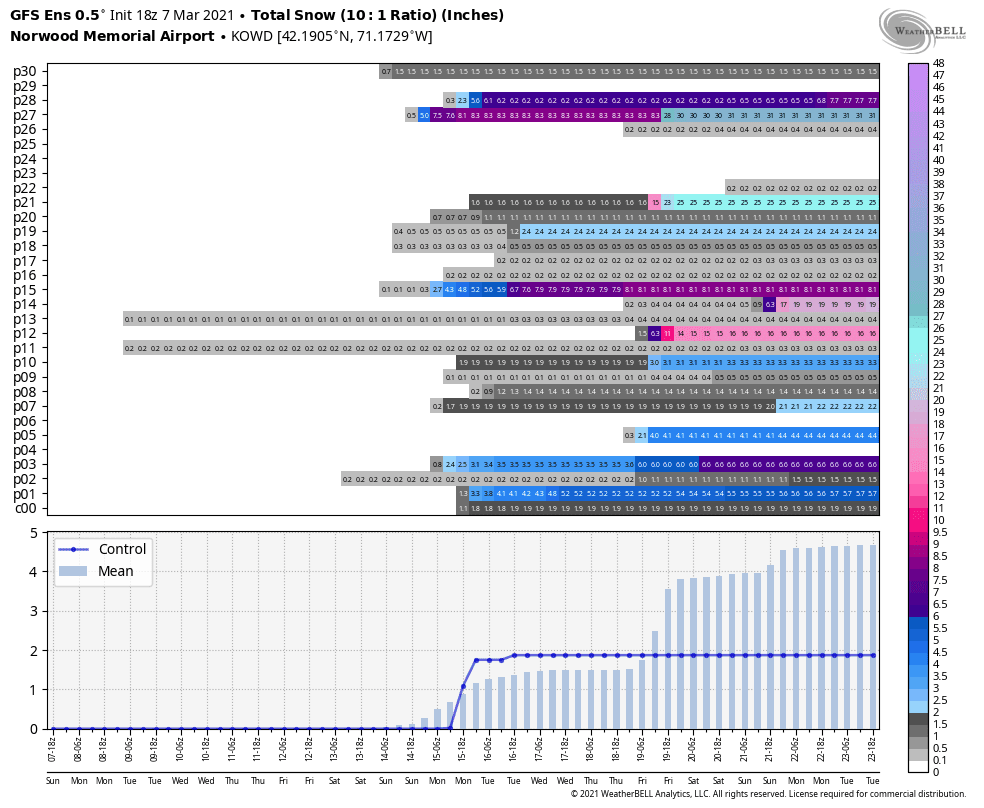 The chart above shows a suite of models and their predictions for snow through March 23.