SOUTH PLAINFIELD, N.J. — Kevin Rivera owes his life to a man he will never meet.

Rivera, 18, was leaving his part-time job at a Chick-fil-A in New Jersey as the remnants of Hurricane Ida pummeled the region. Surrounded by waist-deep water, he searched for a sidewalk.

Instead, he was pulled into a ravine and through a narrow sewer pipe in South Plainfield, New Jersey.

“I couldn’t comprehend where I was, or where I was going,” said Rivera, who shielded his head and tore off the raincoat that was choking him. “All I felt was concrete. When I realized I was in a tunnel, I just let the water take me.”

He was saved when rescuers searching for another man spotted Rivera clinging to a branch in 8 feet of fast-moving water, a police report shows. The other man, Dhanush Reddy, 31, had been pulled through the same 36-inch pipe after parking his car and trying to make his way home on foot with his girlfriend. Reddy did not survive.

Stories of people who drowned in and near their cars or who narrowly cheated death ricocheted across New Jersey after the storm hit Sept. 1. The remnants of Hurricane Ida, which first made landfall 1,300 miles away, killed at least 30 people in New Jersey, more than in any other state. It was New Jersey’s second-deadliest storm on record.

The communities along the state’s 130 miles of Atlantic coastline are painfully familiar with flooding, as are many low-lying towns along its extensive network of rivers.

But damage stretched deep into towns like South Plainfield, where flooding is far less common, underscoring what President Joe Biden called a “code red” warning about climate change as he toured hard-hit parts of New York and New Jersey.

As the most densely populated state, New Jersey has set ambitious goals for reducing the greenhouse gas emissions proven to contribute to global warming and has been buying back homes prone to flooding during hurricanes. But grappling with flash flooding from the more frequent storms that a warming climate unleashes — in a state with the highest percentage of impervious, hard-to-drain surfaces in the country — is in some ways more complicated.

“Are we seeing flooding in areas where we haven’t seen it before?” said Shawn M. LaTourette, commissioner of New Jersey’s Department of Environmental Protection. “The answer is a resounding yes.”

“Ida was a remnant of a tropical depression,” he said. “A really bad thunderstorm wiped out communities. This is the new reality.”

In South Plainfield, flash flooding stranded dozens of motorists, swamped basements and restaurants, and lapped against the back of the municipal building. Musty piles of debris topped with holiday decorations, carpets and warped wooden furniture lined the streets for more than a week afterward in one neighborhood outside the 100-year flood plain, where homeowners are thought to have a 1-in-100 chance of shallow flooding each year.

“The last 50 years, we haven’t had a drop,” said George Babish, 88, whose basement on Redding Avenue filled with about 4 feet of water, destroying a newly installed furnace. It took nearly two days for the water to drain.

Three inches of rain fell per hour as the storm moved from Pennsylvania across New Jersey and into New York, colliding with another low-pressure weather system along the way, according to New Jersey’s state climatologist, Dave Robinson. As several tornadoes touched down in central and southern New Jersey, leveling homes, a group of 300 “citizen scientists” recorded rainfall totals as high as 9.45 inches across a wide corridor of the state, Robinson said.

The volume and pace of the rainfall and the intensity of the tornadoes quickly overwhelmed many communities. The Federal Emergency Management Agency has designated 11 New Jersey counties as major disaster zones.

“And it didn’t come out of nowhere,” Kopp said. “It came on top of Henri and Fred and Elsa.”

“Unfortunately, what we can expect is just a wetter future with more extreme weather events,” he said.

Christina Krusinowski has lived in the same house off South Plainfield Avenue for 26 years. She got a trace of water in her basement 10 years ago during Hurricane Irene. This time the water reached above her ankles.

“I never before saw that much water on my street,” Krusinowski said. “The water was running like a river.”

South Plainfield, a borough of 24,000 people in Middlesex County, about 40 miles southwest of midtown Manhattan, covers about 8 1/2 square miles. Parts of town are along a tributary that widens as it approaches the Raritan River, a waterway that routinely contributes to flooding farther west in towns like Manville, Bridgewater and Bound Brook, near where the U.S. Army Corps of Engineers has built levees, walls and a pump station to alleviate flooding.

But much of South Plainfield is outside the designated flood zone, and commercial and residential development has expanded steadily over the last five decades. Only 10% of land in the borough was vacant in 2000, down from 40% in 1970, according to master plans completed by local officials.

In 2007, more than 39% of the borough was covered by impervious surfaces, which, according to a survey completed by the U.S. Department of Agriculture, was three times the statewide rate of 12%, already the nation’s highest.

“When you pave over it, it can’t drain,” said Alice Tempel, South Plainfield’s recycling coordinator and environmental specialist.

“Our infrastructure is inadequate to handle weather at this rate,” she said.

New Jersey is expected to begin requiring builders to factor in climate change, including rising sea levels and emission levels, in order to win government approval for projects. New rules due by January would enable the state to reject or modify building plans based on anticipated changes to the climate.

New Jersey has also begun encouraging residents, planning officials and political leaders to use its how-to tool kit to increase communities’ flood resiliency. Suggested strategies include altering municipal codes to require that structures be built above the base flood elevation and better using the natural environment to manage stormwater.

In 2015, a report by the Rutgers Cooperative Extension Water Resources Program, which analyzed 54 towns in the Raritan River basin, offered specific recommendations on ways South Plainfield could better address stormwater runoff, including the addition of porous pavement and bio-retention systems like rain gardens. (Neither the borough’s mayor nor the council president returned calls or emails seeking comment.)

Last year, New Jersey released its first scientific report on climate change, concluding that average temperatures in the state had gone up by 3.5 degrees Fahrenheit since 1895, outpacing other parts of the Northeast. Over the last 10 years, average precipitation levels in New Jersey increased 7.9%, the report found.

Even against this sobering backdrop, the scope of the devastation this month was alarming.

“Ida was a bench mark storm for us in the same way that Sandy was a bench mark coastal storm,” said David Rosenblatt, the state’s chief climate and flood resiliency officer. “We’re unprepared for the bigger storms when they come.”

After Hurricane Sandy in 2012, which was linked to 40 deaths in New Jersey, the state began buying back coastal and flood-prone properties from homeowners as part of the Blue Acres program, rendering the land forever off limits to developers.

As of July, the state had offered 1,115 families in 20 towns the option to sell; 830 owners had accepted buyouts, according to a Department of Environmental Protection spokesman, and 705 homes had already been razed.

In South Plainfield, at one end of the borough’s original, two-block downtown corridor stands the family-run Sherban’s Diner.

During the storm, the roof over one dining room began to leak, soaking the ceiling tiles and rug. Then the nearby Bound Brook spilled its banks and flooded a 120-seat banquet hall in the basement, said Kateina Ganiaris, who runs Sherban’s with her husband.

Plumbers and flood remediation companies were booked solid, Ganiaris said, and several inches of standing water still filled the basement eight days after the storm. The basement had flooded before, she said, but never as badly.

“Financially, it’s devastating,” Ganiaris said as customers ate from a handful of tables in a third room the family was able to reopen.

Sales had already been hit hard by forced closings during the pandemic, said Peter Ganiaris, who purchased Sherban’s in 1972.

While trying to clean up from Ida, Kateina Ganiaris was also preparing for a burial: Her 89-year-old mother recently died after testing positive for the coronavirus.

The funeral was Saturday.

“It has been hell,” Ganiaris said. 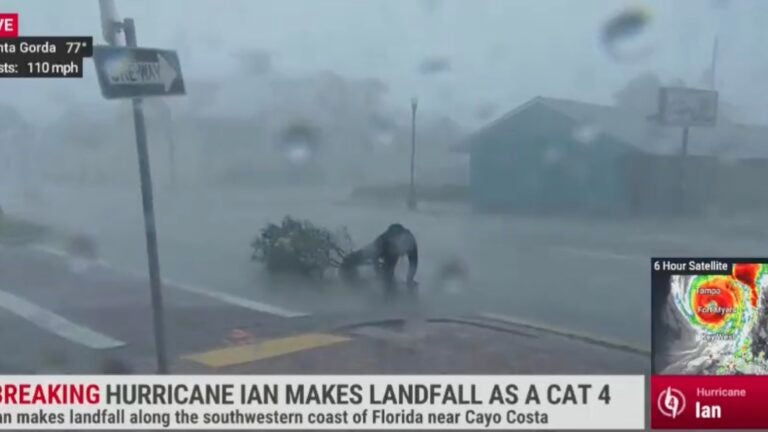 For weather reporters, how close to a storm is too close?