After enduring a wet and wild Friday that brought high winds, rain, and tornado warnings, Boston-area residents can look forward to a mild week.

With the exception of a few showers, the National Weather Service predicts a mostly dry seven days with plenty of sunshine. Eastern Massachusetts can look forward to a mix of sun, clouds, and temperatures mostly hovering in the 50s through Friday, Nov. 19.

Saturday will see mainly sunny skies and a high near 59 before succumbing to a chance of showers after 4 p.m. Sunday and Monday will bring clouds and temperatures in the low 50s. Tuesday will dip down into the 40s, with a high near 48. Temperatures will bounce back on Wednesday and Thursday, with highs reaching near 61 and skies remaining sunny.

The 7-day forecast is a much-needed reprieve from the chaotic weather that’s made its way through New England in recent weeks. A late-October Noreaster caused widespread power outages for nearly 500,000 Massachusetts homes; some were in the dark for multiple days.

Friday’s storm brought similar conditions, including damaging winds that at their peak knocked out power to 15,000 Massachusetts households. By early Saturday morning, only 1,200 were without power.

As a result of Friday’s nasty weather, the NWS warned Bay Staters to be wary of slick leaves that blew into the streets due to high winds.

“Gusty winds [Friday] will blow leaf litter back on the road. Wet leaves covering the road impact the traction between the tire and pavement, at times making the road feel slick. Slow down and drive with caution,” the NWS tweeted Friday.

Motorist Nick Minieri cautioned other drivers Friday evening, saying, “Roads are INSANE right now in Boston with the crazy weather… be safe if you’re out driving.” Others lamented the nasty November weather, with one person describing Boston’s weather as “chaotic evil,” and another person simply labeling it “trash.”

Meteorologists also declared a tornado watch in Nantucket Friday evening, though there were no confirmed touchdowns.

Snow in sight for Western Mass.?

Western Massachusetts may be due for its first real glimpse of winter in the coming days, as WBZ warned of the possibility of the season’s first snowfall.

Meteorologists forecast a chance for the higher elevations of central and western Massachusetts, the Berkshires, and Worcester Hills to see snow on Saturday night, with some snowfall touching northern Worcester County — but the Eastern coastline will likely remain too warm for snow.

Wayward weather across the U.S.

The past year has been the deadliest in terms of U.S. weather-related events since Hurricane Maria hit Puerto Rico in 2017, according to the National Oceanic and Atmospheric Administration (NOAA), with 538 Americans killed so far as a result of weather disasters in 2021.

The 2021 deaths are mainly a result of extreme summer heat in the Pacific Northwest, combined with extreme cold across the South in February, and Hurricane Ida, according to a report by USA TODAY.

La Niña (which translates to “little girl” in Spanish) is a weather pattern that originates in the Pacific Ocean every few years and can influence weather across the globe.

What does this year’s La Niña forecast mean for New England? Bundle up — the NOAA says La Niña tends to bring colder and wetter weather to the Northeast during the winter. 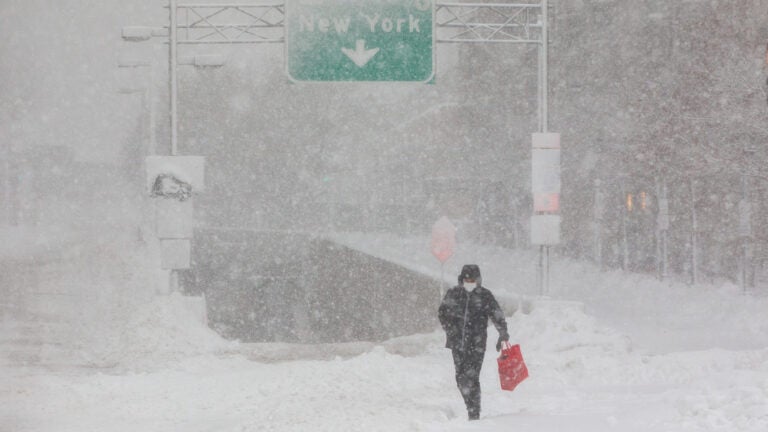 Updated: What local meteorologists are saying about a potential coastal storm on Saturday