Ah, mid-September — that time of year when, despite the crisper, cooler mornings that tend to start making their appearance, devotees of warm weather like to declare that “summer is not over!”

And technically, they are correct: As any follower of the equinoxes can tell you, fall does not officially arrive until next Thursday, September 22, at 9:04 p.m. EDT in the Northern Hemisphere. This is why we need Mount Washington to remind us — to quote that most accurate of meteorological experts, Ned Stark — that Winter Is Coming.

Hence yesterday’s tweet from the Mount Washington Observatory. Granted, while the streets of Boston may have seemed a little chilly with our morning low of 61 degrees, the sign advertising the mountain’s summit looked like a popsicle that had been left too long in the freezer.

Fortunately, today things are downright balmy at the 6,288-foot summit, clocking in at 28 degrees with 58 mph wind gusts. And it’s probably not especially wise to gauge relative weather conditions against the place that bills itself — gleefully! — as “Home of the World’s Worst Weather.”

But the fact remains, summer can’t last forever. And Mount Washington won’t let us forget it. (Don’t even get us started on the Farmers’ Almanac.) 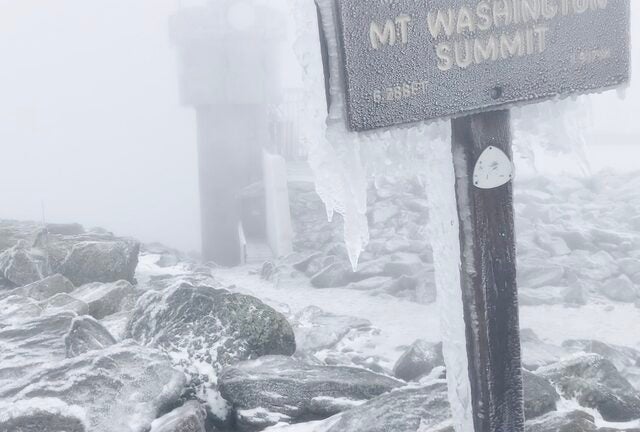