Five years ago, Marilyn Rivera watched as Hurricane Maria battered Puerto Rico, knocking out the power grid and leaving her extended family on the island reeling.

This week, in the aftermath of Hurricane Fiona, the Massachusetts woman is feeling a strong sense of déjà vu.

“It’s been devastating,” she said of the storm, which knocked out power and water to most of Puerto Rico and saw maximum sustained winds of 125 mph, according to The Associated Press.

“My mother lives there with my stepdad, and I have a lot of family members still living there,” Rivera told Boston.com. “And for them to go through what they went through with Hurricane Maria — it’s like they’re reliving this nightmare again.”

Rivera, who was born in the U.S. to Puerto Rican parents, is the vice president of the Puerto Rican Festival of Massachusetts, Inc.

She’s been in touch with her family members on the island, though communication has been tricky at times. For example, Rivera’s mother tries to keep calls short, because she’s only able to charge her phone in her car.

State Sen. Adam Gomez, who represents the Hampden district in Western Massachusetts, was serving as the grand marshal of the Springfield Puerto Rican Parade on Sunday as Hurricane Fiona hit.

“As much as I was trying to celebrate the honor, my heart and mind and prayers and soul was just with the island of Puerto Rico,” said Gomez, the first Puerto Rican elected to the Massachusetts Senate.

Gomez, who has family on the island, was part of Western Mass. relief efforts in 2017, sending medical supplies, food, and other resources to Puerto Rico after Hurricane Maria.

He said it “took some time to really kind of fully understand the magnitude of not only the physical damage, but the emotional damage” following that experience.

With Hurricane Maria still fresh on their minds, Rivera said her family prepared more before Fiona, stocking up on bottled water. Still, they’re faced with lingering uncertainty in the aftermath.

“I think they are in a lot of fear that it [cleanup and recovery] is going to take the same time it did with Hurricane Maria — that’s their biggest fear,” she said.

After Maria, the Salvation Army built a larger warehouse on the island and has more trained responders who know how to deal with similar emergencies, he said in an email interview.

The organization now has about 30-50 active disaster responders on the ground and is offering food, shelter, charging, clean-up support, and emotional and spiritual care, among other services, according to Farrand.

“As I write this there are an additional 7,500 meals and more than 1,000 cleanup kits on their way from our Salvation Army Emergency Disaster Services warehouses,” he said.

Gomez said he and state reps. Orlando Ramos and Carlos González have been in touch with Gov. Charlie Baker’s office, as well as Senate President Karen Spilka and House Speaker Ron Mariano.

He described his approach to hurricane response as the triple Rs: Rescue, relief, rebuild.

Complicating those rebuilding efforts, however, is the Jones Act — an obscure regulation that requires goods shipped between American ports to use American ships and crews — which drives up the cost of shipping basic goods to Puerto Rico and effectively “strangles” the island, Gomez said.

“It’s going to get tough for a lot of people, because … there’s not a lot of expendable income,” he said.

How you can help Puerto Rico

National coalition Power 4 Puerto Rico has compiled a list of community-based non-profit organizations in Puerto Rico, explaining that donations to local groups “allows people who know their communities best to respond to needs throughout the entire Puerto Rican archipelago.”

The Red Cross said it is delivering relief supplies to shelters and has disaster teams helping officials in Puerto Rico with damage assessment and support. The organization is accepting donations for its Hurricane Fiona efforts.

“While we know people have the urge to donate items, the cost of shipping can sometimes make it prohibitive, so cash donations allow for flexibility to direct funds to help people rebuild,” Farrand said.

Have you been impacted by the hurricane in Puerto Rico? Answer the Boston.com poll below, or email [email protected], and we may include your response in a future story.

Has your family been impacted by Hurricane Fiona? Share your story with Boston.com. 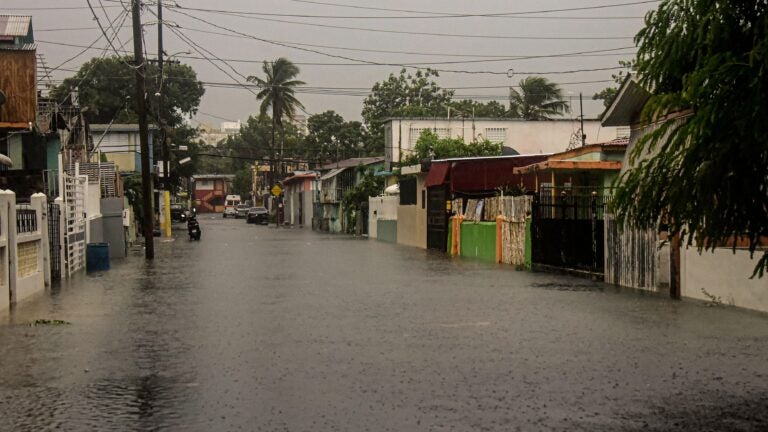