KABUL, Afghanistan (AP) — In a phone call with U.S. Secretary of State John Kerry, Hamid Karzai accused Pakistan of being behind a recent series of attacks and of blocking his government from striking a peace deal with the Taliban, the Afghan president’s office said Sunday.

Karzai routinely makes such accusations against Islamabad, but his tone in recent days has been particularly pointed and direct. They come after three attacks in five days in the capital Kabul, the latest coming on Saturday when assailants fired machine guns and rocket-propelled grenades at the country’s electoral commission ahead of next week’s general election.

Karzai told Kerry on Saturday the attacks were complex in nature and stage-managed by ‘‘foreign intelligence agencies,’’ a reference to Pakistan’s Inter-Services Intelligence. He also told Kerry that he did not accept U.S. arguments that it had no influence ‘‘over countries that support terrorism,’’ and said the U.S.’s refusal to go after the Pakistani intelligence agency could further hurt its relations with Afghanistan.

U.S. officials confirmed the phone call took place but declined to comment on the conversation.

The Taliban have claimed responsibility for the recent violence in Kabul. Islamabad has a long and complicated relationship with the group, but few analysts accept Karzai’s allegations that Pakistani intelligence agencies and not the Taliban are staging attacks. Pakistan denies that it is assisting the Taliban.

‘‘It is highly disturbing that attempts are being made to somehow implicate Pakistan in this terrorist incident,’’ the Pakistani foreign ministry said in a statement issued after the Afghan presidency blamed Pakistan a March 21 assault on the Serena Hotel that left nine dead. ‘‘We reject the insinuation. The tendency to immediately blame Pakistan is unhelpful and should be discarded.’’

Karzai is not allowed to run for re-election in the April 5 ballot, as he is barred by the constitution from seeking a third term in office. He is seen as positioning himself for life after the presidency, depicting himself as a tough-speaking nationalist.

Karzai has also refused to sign a Bilateral Security Agreement with the United States which would allow for the U.S. and NATO to leave behind a residual force of about 12,000 soldiers after the final withdrawal of international combat troops takes place at the end of this year. Despite widespread support for the agreement, Karzai says he first wants the U.S. to move forward with a peace pact with the Taliban, presumably by putting pressure on neighbor Pakistan.

During the telephone conversation, according to the Afghan presidency, Karzai told Kerry that the Taliban were willing to talk to his High Peace Council, an 80-member body tasked by the president to spearhead reconciliation with his armed opposition, but Pakistan was preventing them.

The presidency did not provide further details.

The Taliban has denied any talks with Karzai and says it does not want to speak with the Afghan president. However several Taliban leaders have met with members of Karzai’s High Peace Council in the United Arab Emirates, according to both Taliban and high peace council members, who have previously spoken to The Associated Press on condition of anonymity so as not to disrupt the delicate diplomacy.

The bomb was set off by remote control as a convoy reached the outskirts of Qalat, capital of Zabul province, said district governor Abdul Khaliq Ayubi. He said another three troops were wounded.

The Romanian defense ministry said Claudiu Constantin Vulpoiu died in the early Sunday attack. Romania has 1,029 troops serving in the NATO mission in Afghanistan and 23 have been killed.

Most of Afghanistan’s security is now in the hands of the Afghan National Security Forces ahead of the withdrawal of international combat troops at the end of December. Still, international service personnel occasionally patrol troubled areas and assist Afghan troops when requested.

In Tirin Kot, the capital of southern Uruzgan province, a remotely detonated explosive devise apparently planted in a car killed one person and injured 14 others, according to Provincial Deputy Police Chief Mohammed Aslam Kochi.

No one took responsibility for either incidents but the Taliban are suspected in both explosions.

A stubborn insurgency still rages in Afghanistan’s south and east.

AP reporter Mirwais Khan in Kandahar and Alison Mutler in Bucharest contributed to this report. Kathy Gannon is AP Special Regional Correspondent for Afghanistan and Pakistan and can be followed on www.twitter.com/kathygannon 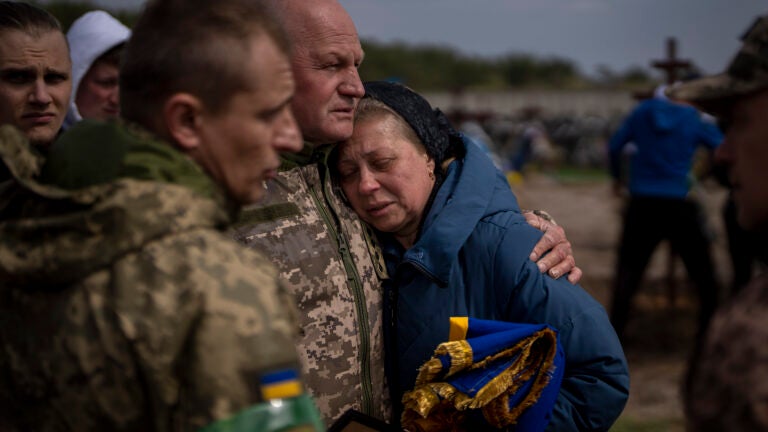