Protests are raging throughout Brazil, with the kickoff to the 2014 World Cup now only days away. Even though Brazil is a country of soccer fanatics, officials are starting to worry that the protests will overshadow the whole tournament.

Here’s a breakdown of the situation in Brazil, if you’re just now tuning in to the drama:

Soccer in Brazil: Brazil loves it some fútbol. Their national team has won the FIFA World Cup five times, more than any other nation. Pelé, the top scorer of all time in the game, hails from Brazil (he’s basically the Wayne Gretzky/Babe Ruth/Michael Jordan of soccer). This is the first time the World Cup has been hosted in Brazil since 1950, and the first time a South American country has hosted since 1978.

The Stakes: Brazil hasn’t hosted the Cup, the most-watched televised sporting event in the world, in over 60 years. They probably want this to go well. For one thing, in the past year, Brazil’s status as a wunderkind of economic growth has been waning.

Its economy boomed throughout the 2000s, fueled in large part by their vast natural resources and investments from China. But in the past three years or so, that growth has slowed – their stock market has weakened, and inflation has caused prices to soar in the past few months. If the tournament goes well, though, it could help Brazil prove to global investors that, yes, sirs and madams, they still have it together.

Oh, and the month-long tournament is supposed to pull 3.7 million tourists to the country and bring in $3 billion in revenue. For all you non-billionaires out there, that’s some serious cash.

Why They’re Protesting: For a lot of Brazilians, the Cup has become a symbol of how their country’s economic boom hasn’t really improved their daily lives. Participants in the protests, which started in June 2013, say that the enormous amount of money spent preparing for the tournament and building stadiums (around $11 billion) could be better used on social programs for the poor.

Even though poverty rates have gotten better in the last few years, economic inequality is a still a huge issue for Brazil. The World Bank estimates that nearly 16% of the country lives in poverty.

The Protesters: According to a study by the Pew Research Center published on Tuesday, most people in Brazil are not happy campers. 72% of people surveyed are “dissatisfied with things in Brazil today’’ (their wording, not mine), up from 55% a year ago. Six out of 10 Brazilians say hosting the World Cup is a bad thing for Brazil, because it’s taking money away from public services like health care and education.

There are a few big groups that have been organizing the protests. There’s the anarchist group Black Bloc, whose members cover their faces and are prone to window-smashing and arson.

The subversive online hacking community Anonymous announced that they’ll be launching an attack on the FIFA World Cup and its sponsors.

On June 3, the group Rio de Paz launched a bunch of giant balloons with crosses on them. The balloons were supposed to symbolize the thousands of people murdered each year in Rio due to a dearth of funds spent on security.

Past Protests: Soccer protests aren’t unprecedented in Brazil. Sparked initially by the rise in transportation fares during the Confederations Cup in 2013, thousands of people took to the streets of Rio de Janeiro. The public outcry soon began to spread across the country to encompass other issues, including government corruption and the initial estimates for the cost of staging the 2014 World Cup. Over 10 people died then, and over 650 people were arrested. 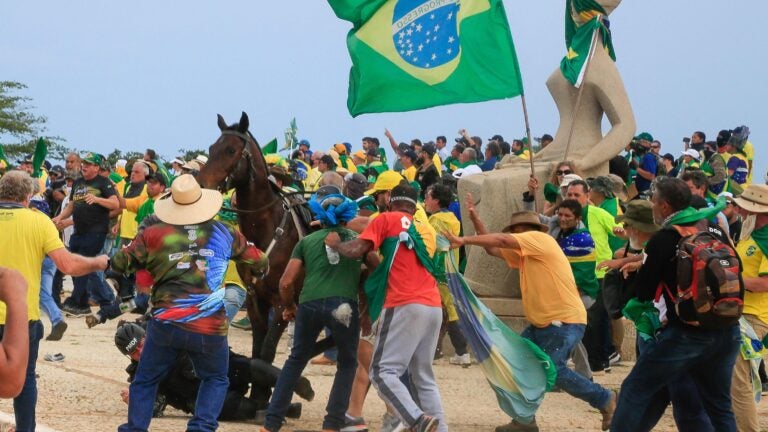 ‘I never thought I would see something like this’: Brazilians in Mass. react. to political riots in their home country