PASLANG, Nepal — Aid reached a hilly district near the epicenter of Nepal’s earthquake for the first time Wednesday, four days after the quake struck and as the death toll from the disaster passed the 5,000 mark.

But it will still take time for the food and other supplies to reach survivors in remote communities who have been cut off by landslides, warned said Geoff Pinnock, a World Food Program emergencies officer.

‘‘It doesn’t happen overnight,’’ said Pinnock from the village of Majuwa, 20 kilometers (16 miles) downhill from Gorkha town, a staging area for relief efforts to areas worst-hit by Saturday’s magnitude-7.8 earthquake.

Nearby, five cargo trucks filled with rice, cooking oil and sugar stood on a grassy field fringed with banana and acacia trees beneath the soaring Himalayas, waiting for a helicopter carry the supplies to remote, quake-hit villages.

Soon, the U.N. food agency was expected to deliver shipments of high-energy food biscuits to be sent out to areas without enough water for cooking, Pinnock said. The first aid shipments had reached Dhading district, just east of Gorhka, near the epicenter, about 80 kilometers (50 miles) northwest of Kathmandu.

Nepalese police said Wednesday the death toll from the quake had reached 4,989. Another 18 were killed on the slopes of Mount Everest, while 61 died in neighboring India, and China’s official Xinhua News Agency reported 25 dead in Tibet, putting the total over 5,000.

The disaster also injured more than 10,000, police said, and rendered thousands more homeless. The U.N. says the disaster has affected 8.1 million people — more than a fourth of Nepal’s population of 27.8 million — and that 1.4 million needed food assistance.

‘‘Under normal circumstances, a government would have the capacity to respond to maybe 10, or 20, or 30,000 people in need. But if you’re looking at 8 million as we are here, you need a bit of time to scale everything up,’’ Pinnock said.

Planes carrying food and other supplies have been steadily arriving at Kathmandu’s small airport, but the aid distribution process remains fairly chaotic, with Nepalese officials having difficulty directing the flow of emergency supplies.

About 200 people blocked traffic in the capital Wednesday to protest the slow pace of aid delivery. The protesters faced off with police and there were minor scuffles but no arrests were made.

But in a sign that life was inching back to normal, banks in Kathmandu opened for a few hours Wednesday and stuffed their ATMs with cash, giving people access to money.

Thousands of people lined up at bus stations in the capital, hoping to reach their hometowns in rural areas. Some have had little news of family and loved ones since Saturday’s quake. Others are scared of staying close to the epicenter, northwest of Kathmandu.

‘‘I am hoping to get on a bus, any bus heading out of Kathmandu. I am too scared to be staying in Kathmandu,’’ said Raja Gurung, who wanted to get to his home in western Nepal. ‘‘The house near my rented apartment collapsed. It was horrible. I have not gone indoors in many days. I would rather leave than a live a life of fear in Kathmandu.’’

In some heartening news, French rescuers freed a man from the ruins of a three-story Kathmandu hotel more than three days after the quake. Rishi Khanal, 27, said he drank his own urine to survive.

Khanal had just finished lunch at a hotel last Saturday and had gone up to the second floor when everything suddenly started moving and falling. He was struck by falling masonry and trapped with his foot crushed under rubble.

‘‘I had some hope but by yesterday I’d given up. My nails went all white and my lips cracked … I was sure no one was coming for me. I was certain I was going to die,’’ he told The Associated Press from his hospital bed on Wednesday.

Khanal said he was surrounded by dead people and a terrible smell. But he kept banging on the rubble all around him and eventually this brought a French rescue team that extracted him after being trapped for 82 hours. 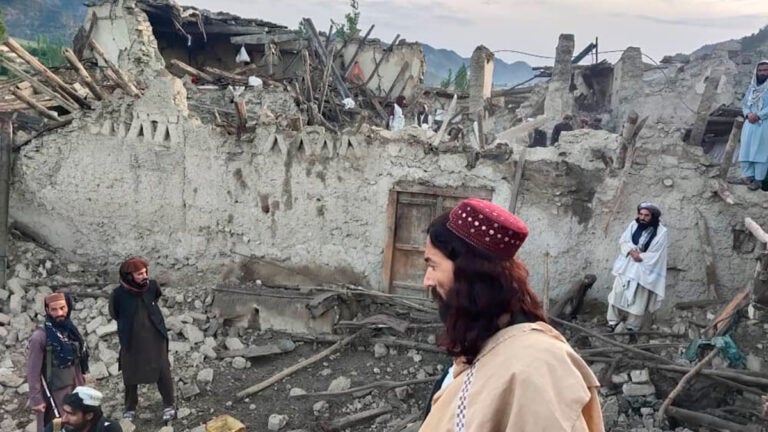