BRUSSELS — Two suicide bombers who carried out deadly attacks Tuesday in Brussels have been identified as brothers with criminal records, Belgian officials said on Wednesday. The toll from the assaults, at the city’s main airport and at a subway station in central Brussels, stood at 31 dead and 270 injured.

The brothers — Ibrahim el-Bakraoui, 30, and Khalid el-Bakraoui, 27 — were both Belgian and had a criminal history, but they had no known links to terrorism until the authorities conducted a raid on March 15 on an apartment in the Forest district of Brussels as part of the investigation into the Nov. 13 attacks in Paris.

Ibrahim el-Bakraoui and another man blew themselves up at the airport at 7:58 a.m. — in two explosions, nine seconds apart — and then Khalid el-Bakraoui carried out a suicide attack at the Maelbeek subway station, around an hour later, Frédéric Van Leeuw, the Belgian federal prosecutor, said at a news conference. It was not immediately clear whether Khalid el-Bakraoui had also participated in the airport attacks.

Belgium observed a minute of silence at noon on Wednesday. The nation remained in a state of mourning and on the highest state of alert. The airport — which is being treated as a crime scene — remains closed. Many subway lines were not running. The Maelbeek station, where about 20 people were killed, remained shut. Some schools were open, but many employees stayed home.

An intensive hunt continued for a man who was recorded by a security camera alongside Ibrahim el-Bakraoui at the airport Tuesday and who is believed to have fled.

The police raided a building in the Anderlecht neighborhood of Brussels Wednesday. Officers in hazmat suits carted out files and plastic boxes from the building, while masked officers stood guard outside. Two police officers in the neighborhood said an arrest had been made, but the identity of the person arrested was not clear.

Since Friday, Belgian authorities have been searching for Najim Laachraoui, a suspect who has been linked to the Paris attacks in November. Whether Laachraoui was involved in the attacks Tuesday is not clear.

Several Belgian news outlets reported last week that the Bakraoui brothers had been wanted since the March 15 raid. 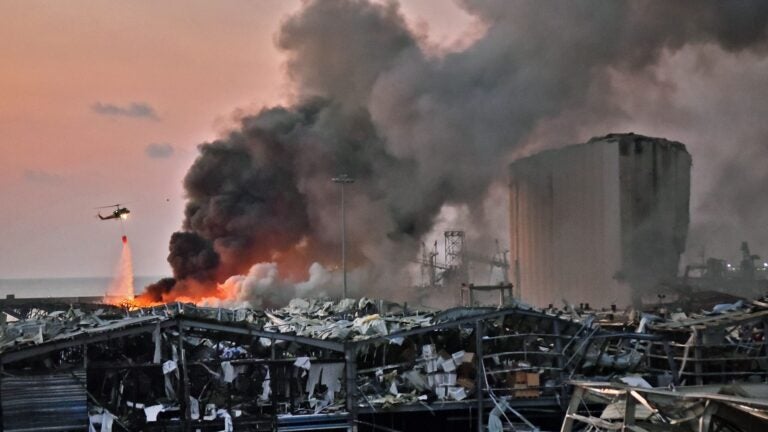