The new Boeing 737-8 MAX plane that crashed shortly after takeoff from Addis Ababa on Sunday morning was one of 30 purchased and being delivered to the rapidly expanding airline.

A Boeing statement in July noted the delivery of the first plane.

The Ethiopian Airlines CEO says the plane that crashed with 157 people thought to be on board had been delivered in mid-November.

It is not yet clear what caused the crash just six minutes after takeoff en route to Nairobi. The CEO says the pilot sent out a distress call and was given clearance to return.

The Ethiopian Airlines CEO and Kenya’s transport minister say Canadians, Chinese, Americans and others are among the many nationalities among the victims of Sunday morning’s deadly plane crash after takeoff from Addis Ababa.

Authorities earlier said 32 Kenyans and nine Ethiopians were killed. Now they add 18 Canadians; eight each from China, the United States and Italy; seven each from France and Britain; six from Egypt; five from the Netherlands and four each from India and Slovakia.

The airline has said 157 people were thought to be on board.

It is not yet clear what caused the crash of new Boeing 737-8 MAX plane shortly after takeoff from Bole Airport en route to Kenya’s capital, Nairobi.

Ethiopian Airlines has published a photo that appears to show its CEO standing amid the wreckage of the plane that crashed shortly after takeoff from Addis Ababa.

Little of the plane can be seen in the freshly churned earth.

The airline’s social media post says that “Tewolde Gebremariam, who is at the accident scene now, regrets to confirm that there are no survivors. He expresses his profound sympathy and condolences to the families and loved ones of passengers and crew who lost their lives in this tragic accident.”

The airline has said 157 people — 149 passengers and 8 crew — are thought to have been on board the flight that crashed six minutes after takeoff en route to Nairobi.

It is not yet clear what caused the crash.

A spokesman for Ethiopian Airlines says the among the dead in the crash Sunday are 32 Kenyans and 17 Ethiopians. Asrat Begashaw said that 31 other nationalities were also among those on board the new Boeing 737-8 MAX plane that crashed, killing all the 157 people thought to be on the flight.

Ethiopia’s state broadcaster says all passengers on the Ethiopian Airlines plane that crashed shortly after takeoff from Addis Ababa are dead.

The airline has said 157 people were thought to be on board the flight to Nairobi on Sunday morning.

The cause of the crash of the new Boeing 737-8 MAX plane is not immediately known.

Records show that the Ethiopian Airlines passenger plane that crashed shortly after takeoff Sunday morning from Addis Ababa en route to Nairobi was a new one.

The Planespotters civil aviation database shows that the plane, a Boeing 737-8 MAX, was delivered to Ethiopian Airlines in mid-November.

The Ethiopian Airlines’ statement says the 737-8 MAX crashed six minutes after takeoff, with 157 people thought to be on board.

The cause of the crash is not immediately known.

Ethiopian Airlines says it believes 149 passengers and eight crew members were on board a plane that crashed six minutes after taking off from Ethiopia’s capital, Addis Ababa, on a flight to Nairobi.

A statement from the airline on Sunday morning said the Boeing 737 crashed around Bishoftu, or Debre Zeit, some 50 kilometers (31 miles) south of the capital, shortly after taking off at 8:38 a.m. local time.

The airline statement said “search and rescue operations are in progress and we have no confirmed information about survivors or any possible casualties.”

The Ethiopian prime minister’s office says an Ethiopian Airlines plane has crashed on its way to Nairobi, with deaths reported.

The office issued a statement Sunday morning saying the Boeing 737 was on a regularly scheduled flight when it crashed. The statement gave no details.

A spokesman for the airline confirmed the plane crashed while heading from Ethiopia’s capital, Addis Ababa. It is not yet clear where the crash occurred. The airline has not issued a statement.

The state-owned Ethiopian Airlines calls itself Africa’s largest carrier and has ambitions of becoming the gateway to the continent. 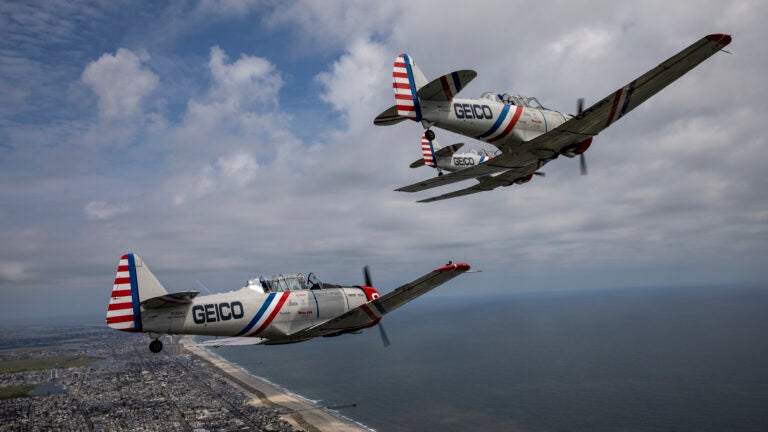 NH pilot of WWII-plane killed in crash at Pennsylvania airport