Through the large picture windows lining the Viking Sky, passengers on Saturday afternoon watched the gray waves churn and the horizon teeter as their massive ship, carrying 1,373 people, became overwhelmed by the sea.

Outside, a storm in the rough, frigid waters off Norway’s western coast had surrounded the Britain-bound cruise ship with 26-foot waves and 43-mph wind gusts.

Inside, the ship’s engines had failed – setting the vessel adrift in Hustadvika Bay and toward the rocky shoreline. Plants, a piano and lounge furniture slid across the floor with each tilt of the ship. Ceiling panels fell to the ground, and icy water crashed through broken windows.

“It was frightening at first,” passenger Alexus Sheppard, who posted videos online from inside the ship, told the Associated Press. “And when the general alarm sounded, it became VERY real.”

The crew threw down an anchor and issued a mayday call. Then the wait began.

For 24 hours, those aboard – a mix of American, British, Canadian, New Zealand and Australian citizens – endured violent conditions as rescue teams worked to evacuate passengers one by one. Smaller rescue boats weren’t a safe option because of the dangerously high swells, so Norwegian authorities airlifted individual passengers from the ship.

Reuters reported that police chief Hans Vik, who heads the Joint Rescue Coordination Center of Southern Norway, told TV2 that the ship drifted within 330 feet of shore before the crew was able to restart one engine.

“If they had run aground we would have faced a major disaster,” Vik told TV2.

Passenger Rodney Horgen, a Minnesota resident, told the AP that he was a weathered fisherman and had never experienced anything like the conditions aboard the Viking Sky.

Horgen said a six-foot wall of water broke through a door and windows and swept fellow passengers, including his wife, Judie Lemieux, 30 feet across the floor.

“That was the breaker. I said to myself, ‘This is it,'” Horgen told the AP. “I grabbed my wife, but I couldn’t hold on. And she was thrown across the room. And then she got thrown back again by the wave coming back.”

“We saw a wave that covered the entire ship.” More than 600 US citizens were among the 1,300 people on board a cruise ship that had to be evacuated after the ship suffered engine failure in rough weather. @keirsimmons has the latest. pic.twitter.com/hqIP3Cdnzy

Coming to terms with the force and temperature of the water – and what it would do to a person tossed overboard – was “very, very frightening,” Horgen said.

“You would not last very long,” he said.

The trip was a pilgrimage of sorts for Horgen, who was looking forward to visiting the home of his ancestors.

The cruise was scheduled to pass through the Norwegian towns and cities of Narvik, Alta, Tromso, Bodo and Stavanger before docking in the British port of Tilbury on the River Thames on Tuesday.

Passenger Janet Jacob told Norwegian public broadcaster NRK that she was among the first groups of passengers to be evacuated by helicopter. The strong winds were “like a tornado,” she said, and she prayed “for the safety of all aboard.”

“I was afraid,” she said. “I’ve never experienced anything so scary.”

John Curry, an American passenger who was eating lunch when the ship began to shake, told NRK that the incident was “chaos” and that he’d “rather not think about” the helicopter ride from ship to shore.

Viking Cruises chairman Torstein Hagen told TV2 that the passengers had had “a bit of a shocking experience.”

“Most of our passengers are senior citizens … imagine what it’s like to hang there on that wire,” Hagen said. “It must be a terrible experience, but they seem to have handled it very well.”

The Norwegian Red Cross told Reuters that even those who weren’t physically harmed have been “traumatized by the experience” and required care on shore.

Viking Cruises told Reuters in a statement that guests were staying in local hotels and that the company was arranging flights for them to return to their home countries.

My dad and stepmom just took their helicopter ride off of the #VikingSky and are safe and sound at a hotel in Molde as of a few minutes ago, where there is free food and wine apparently. She said “the hoist up was something.” #VikingSky #Mayday

Panicked friends and family members of passengers took to social media, seeking information about their loved ones. Some passengers, including Sheppard, documented the entire rescue mission, sharing photos, videos and observations via social media.

Sheppard shared photos of people sleeping on the floor and using life vests as pillows.

By 10 a.m. Sunday (Norwegian time), three of the ship’s four engines were working and the ship, carrying 436 guests and 458 crew members, was on its way to dry land, Viking Ocean Cruises said in a statement. In all, 479 passengers had been airlifted, and 20 people suffered injuries and were being treated at hospitals in Norway.

As the ship headed toward Molde in calmer seas, Sheppard tweeted a video of dozens of passengers shuffling around those same bright-orange life vests.

“People are SO bored,” she said, “they’re repacking the life jackets.”

People are SO bored they’re re-packing the life jackets ? pic.twitter.com/3WBqEoWX5t

On Sunday afternoon, the ship docked in Molde, Norway.

Hagen told Norway’s VG newspaper that the Viking Sky rescue was among the most difficult events in which he has been involved. 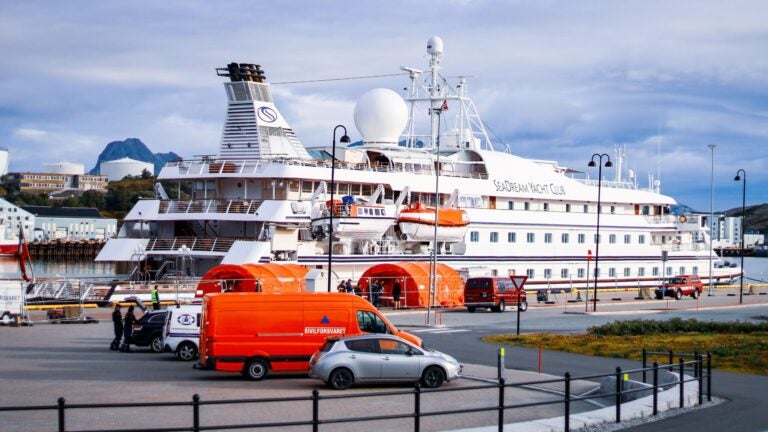