LONDON – It is the photograph that has captured a hopeful, valiant, precise moment in a divided Britain – a powerfully built Black Lives Matter protester, a personal trainer and a grandfather, hoisting an injured far-right demonstrator onto his shoulder to rescue him from a violent scrum near Waterloo Bridge.

From Saturday’s melee in central London emerged Patrick Hutchinson, a black Briton, hailed as savior, carrying a white man, with shaved head and cut-off jeans, onto his shoulders in a firefighter’s lift.

The British tabloids, even the right-wing ones, called Hutchinson a “hero,” and accolades from politicians and ordinary folk poured forth on social media. Prime Minister Boris Johnson’s official spokesman said, “Patrick Hutchinson’s instincts in that moment represent the best of us.”

In an interview with Britain’s Channel 4, Hutchinson said he arrived at the scene to see the man he rescued on the ground, under attack by counterprotesters.

Hutchinson and his mates formed a cordon around the man.

“If the other three police officers that were standing around when George Floyd was murdered had thought about intervening, and stopping their colleague from doing what he was doing, like what we did, George Floyd would be alive today still,” Hutchinson said, referring to the unarmed black man in Minneapolis who died as a police officer put a knee to his neck for almost nine minutes.

“I just want equality for all of us. At the moment, the scales are unfairly balanced and I want things to be fair for my children and my grandchildren,” Hutchinson told broadcasters.

The rescue occurred during rallies in London on Saturday, when Black Lives Matter demonstrators had mostly yielded the streets to avoid clashes with far-right counterprotesters, who organizers had called out to defend national monuments, such as the Winston Churchill statue in Parliament Square and the Cenotaph memorial outside 10 Downing Street, from vandalism.

A week ago, during protests against racism and police brutality, one young man tried to light a Union flag alight at the Cenotaph, the memorial to Britain’s war dead. Someone else tagged the Churchill statue with graffiti calling him a racist, which has sparked a national debate over the wartime prime minister’s words and actions.

On Saturday, the Reuters photographer Dylan Martinez captured the image of Hutchinson emerging from a crowd with the injured man on his shoulder.

Before he captured the image, Martinez heard a shout, “That’s not what we do!”

“I saw a skirmish and someone falling to the ground,” Martinez told his news organization. “The crowd parted right in front of me. I was in the right place at right time, and incredibly lucky from that point of view.”

Reuters journalists at the scene reported the injured man had been beaten by counterprotesters. “Some people in the crowd shouted out that the assault victim was a member of the far-right,” the news agency wrote.

Saturday’s protests were dominated by groups of mostly white men, some from far-right groups who claimed they were there to protect statues in Parliament Square, even though the statues had already been boarded up.

Witnesses in London shot mobile phone video of one group of men, with cans of beer in their hands, harassing and kicking at picnickers sitting on a lawn in a park. Others were filmed goading and attacking police. Reporters on the scene said many of the men appeared drunk.

Video posted on social media showed white protesters throwing glass bottles and missiles at the police. The far-right activists were also hostile toward the media, pushing cameras to the ground.

A man was photographed urinating next to a memorial of Keith Palmer, a police officer who was stabbed to death in the 2017 Westminster terrorist attack. A group harassed a group of picnickers as they passed through London’s Hyde Park. The Metropolitan Police said that more than 100 people were arrested on Saturday.

Johnson, the British prime minister and Churchill biographer, said he would do everything in his power to protect the statue of Churchill, but called the counterprotesters “far-right thugs and bovver boys.”

A “bovver boy” in British slang is a hooligan, often a skinhead, who creates bother.

“It was right that a good number should have been arrested,” Johnson said in a column in the Daily Telegraph. “They were violent. They were aggressive towards the police. They were patently racist. There is nothing that can excuse their behaviour.”

Johnson pledged to set up a commission to examine racial inequality in the Britain.

David Lammy, a Labour politician and author of a 2017 review of inequality in the criminal justice system, said that action was needed, not more reports.

“He’s announced a commission, behind a paywall, in the Telegraph, buried in the middle of yet another article about Churchill. If he was serious, why are there no details?” Lammy told the BBC. “Get on with the action, legislate, move – you’re in government, do something,” he said. 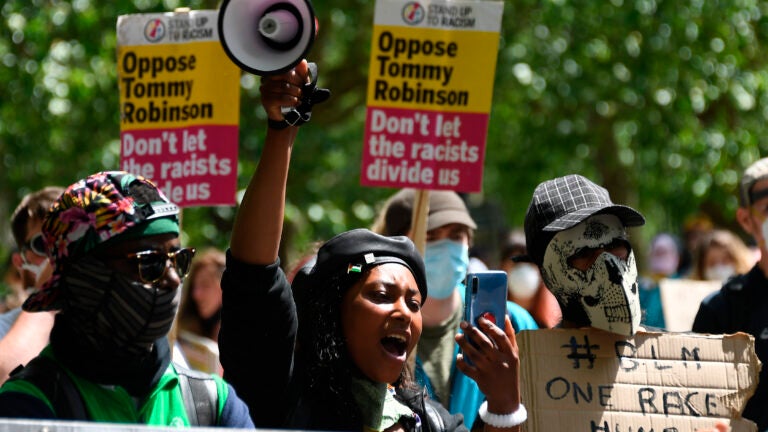