The massive explosions in a Beirut port on Tuesday provoked fear, then speculation after an eerie, white cloud enveloped the lenses of bystander videos, with many suggesting online that it looked something like a nuclear blast.

But the building consensus among arms experts and Lebanese officials is that the explosion, which killed at least 63 people and injured thousands more, may have been ignited by burning chemicals stored at a warehouse.

Many not accustomed to seeing large explosions may conflate mushroom clouds and spherical blast waves as nuclear, said Jeffrey Lewis, an arms-control expert and professor at Middlebury Institute of International Studies at Monterey. “But some of the things we associate with nuclear explosions are just associated with explosions.”

My brother sent me this, we live 10 KM away from the explosion site and the glass of our bldgs got shattered. #Lebanon pic.twitter.com/MPByBc673m

Few things can be concluded from the videos, including some filmed before the bigger of the blasts, which Lewis said may have begun when munitions in storage caught fire.

A rising cloud of white smoke featured crackling and bright pops consistent with when small munitions – rockets, for instance – begin cooking off, he said.

Then a fireball erupts, followed by an orb of white that quickly expands from the blast zone. That is the pressure of the shock wave condensing the moisture in the air, he said.

Brian Castner, a former Air Force bomb technician and investigator at Amnesty International, echoed that on Twitter, saying the shock wave “is visible in the humid air.”

Lebanese Interior Minister Mohammed Fahmi said it appeared that stocks of ammonium nitrate, a fertilizer that can be used in bombmaking, had exploded.

The telltale signs of ignited ammonium – reddish smoke – spewed from the blast, Lewis said. The color is consistent with the chemical compound and comes from nitrogen oxides, the byproduct of which gives smog its reddish-brown tones. 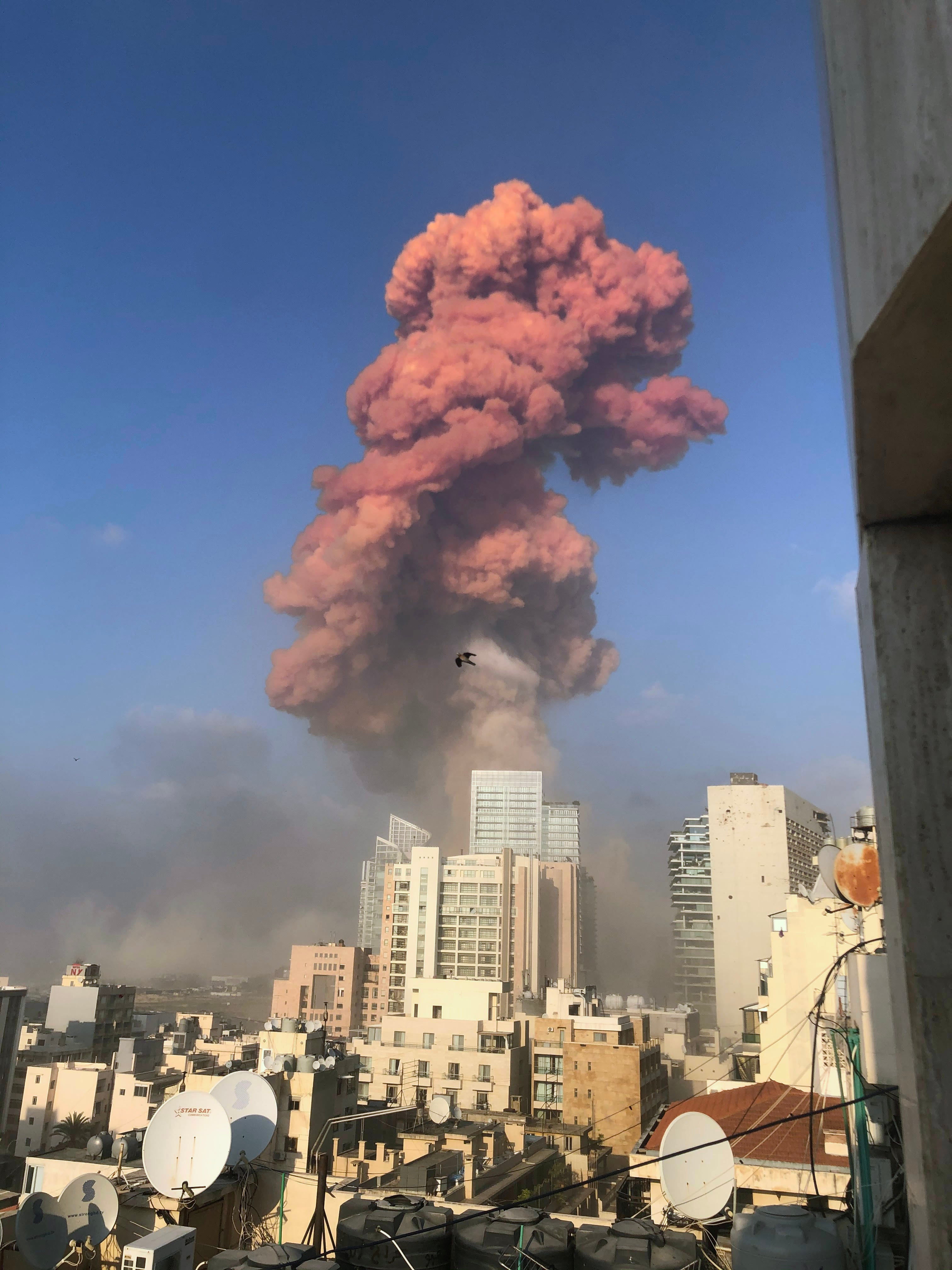 Lebanese Prime Minister Hassan Diab linked the explosions to dangerous stocks of chemicals that had been stored at the port since 2014, despite warnings from port officials that the material was not safe.

“I promise you that this catastrophe will not pass without accountability. . . . Those responsible will pay the price,” he said in a televised speech. “Facts about this dangerous warehouse that has been there since 2014 will be announced and I will not preempt the investigations.”

Around 2,700 tons were stockpiled, Lebanese President Michel Aoun said. That is near back-of-the-envelope estimates of the size of the explosion, which is around the equivalent of a “few hundred tons of TNT,” Lewis said. Ammonium nitrate is not as powerful as TNT.

In 2011, a similar explosion occurred in Cyprus after munitions stored there for years exploded, killing at least 12.