ROME — The Vatican has confirmed the pope’s remarks on gay couples deserving civil protections as it sent an explanatory note to bishops underlining that Pope Francis’ comments did not mark a change in church doctrine.

The pope’s remarks made headlines last month after they appeared in the documentary “Francesco,” at its Oct. 21 premiere at the Rome Film Festival. In the documentary, he reiterated his view that gay people are “children of God,” and said: “What we have to create is a civil union law. That way they are legally covered.”

Last week, acknowledging the “various reactions and interpretations” provoked by the pope’s apparent break from his predecessors, the Vatican secretary of state sent an explanatory note to its nuncios, or ambassadors, to be shared with bishops, “with the desire to favor an appropriate understanding of the words of the Holy Father.”

The apostolic nuncio to Mexico, the Rev. Franco Coppola, published the unsigned note on his Facebook page Saturday. On Monday, a Vatican official confirmed its authenticity.

The note says that during a 2019 interview, the pope had answered two separate questions — asked at different moments — that in the documentary were “edited and published as a single answer without proper contextualization, which has led to confusion.”

The director of the film, Evgeny Afineevsky, had told reporters that the pope had made the comments on civil unions directly to him, but it emerged soon after that the comments had apparently been made in a 2019 interview with Mexican broadcaster Televisa.

The pope’s comments on civil unions had been cut from that interview, but it remains unclear under whose orders the snipping took place.

In its explanatory note, the Vatican said Francis’ comments on civil union referred to a position he had taken when he had been archbishop of Buenos Aires and had strongly opposed a 2010 law allowing same-sex marriage. Argentina was the first country in Latin America to legalize same-sex marriage.

In the Televisa interview, correspondent Valentina Alazraki asked the pope whether his position on same-sex marriage had softened upon becoming pope. Francis responded that it was “an incongruence to speak about gay marriage,” for the Catholic Church, a comment that Afineevsky cut.

But the Vatican note said that during the Televisa interview, in speaking of the controversy in Argentina, Francis had argued for the right of gay couples to have legal protections.

The Vatican note also pointed to a 2014 interview in which the pope had reiterated that “marriage is between a man and a woman” but that secular states could seek to “justify civil unions to regulate various situations of coexistence, driven by the demand to regulate economic aspects among people, such as ensuring health care.”

It is clear, the note said, that Francis was referring to secular laws, “not certainly the doctrine of the Church, many times reaffirmed over the years.”

Francis’ comments conflict with the Vatican’s official position on same-sex civil unions. A 2003 document issued by the Congregation of the Doctrine of the Faith says that the church’s “respect for homosexual persons cannot lead in any way to approval of homosexual behavior or to legal recognition of homosexual unions.”

The document, which was signed by the then-prefect of the congregation, Cardinal Joseph Ratzinger, who went on to be Pope Benedict XVI, sought to sway Catholic lawmakers as an increasing number of countries sought to ratify legal rights for same-sex couples.

“Legal recognition of homosexual unions or placing them on the same level as marriage would mean not only the approval of deviant behavior, with the consequence of making it a model in present-day society, but would also obscure basic values which belong to the common inheritance of humanity,” the document said. 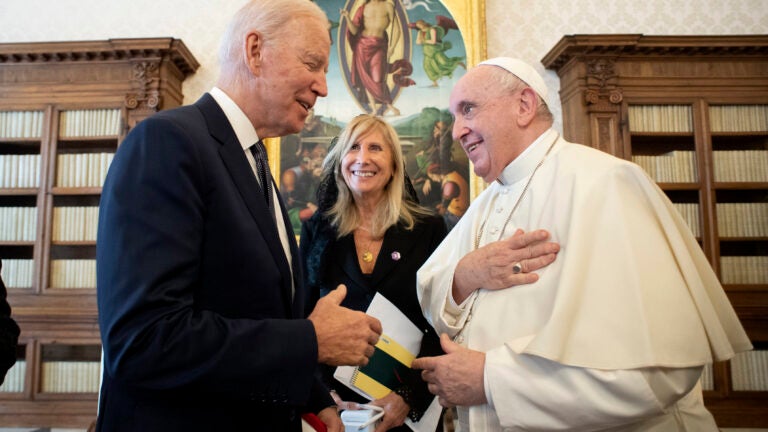