NEW DELHI (AP) — More than a billion Indians celebrated Diwali on Saturday amid twin concerns of a resurgence in coronavirus infections and rising air pollution that is enveloping the country’s north in a cloud of thick toxic smog.

Diwali, the Hindu festival of lights, is typically celebrated by socializing and exchanging gifts with friends and family, and lighting oil lamps or candles to symbolize a victory of light over darkness. Fireworks are also a major part of the celebrations.

But this year, the pandemic is upending some of the celebrations in India, particularly in New Delhi, the capital, which has seen a renewed spike in coronavirus infections in recent weeks, recording more new cases than any other Indian state.

On Saturday, many temples across the country streamed prayer sessions online to avoid large gatherings. In New Delhi, worried residents opted for low-key celebrations. Some even stayed home and didn’t visit friends or relatives.

“It’s not the usual Diwali,” said Vishwas Malik, 47, a professor in New Delhi. “The exchange of gifts is less and we have not interacted with people. We have not visited people’s homes because of the fear of the coronavirus.”

In a bid to encourage people to stay home, New Delhi’s chief minister, Arvind Kejriwal, and some of his ministers held a prayer ceremony at a grand temple. The prayers were broadcast on television and social media.

Kejriwal said last week that the pandemic was spreading fast in the capital due to the rising air pollution. He appealed to people to not burst firecrackers on Diwali, in hopes of mitigating the harmful effect of toxic air on those who are more vulnerable during the pandemic. Firecrackers often cause spikes in New Delhi’s notoriously bad pollution.

The link between air pollution and worsening COVID-19 cases remains mostly theoretical at the moment. But several researchers have said that in addition to factors such as mask wearing, social distancing, population density and temperature, dirty air should also be considered a key element in coronavirus outbreaks.

India has confirmed 8.7 million cases of the coronavirus, including 129,000 deaths. While it is second in the world in total cases behind the U.S., daily infections have been on the decline since the middle of September.

Shoppers had been packing markets across the country, prompting concerns among health experts who warned that crowded celebrations could cause a virus resurgence that could batter India’s healthcare system. But ahead of Diwali, messages encouraging people to stay home during the festival whizzed around New Delhi via WhatsApp.

“This Diwali is more about survival. It is about being grateful that we are still able to breathe and be alive for this day. Please stay home,” read one such message.

Prime Minister Narendra Modi continued with his custom of celebrating Diwali with Indian soldiers, flying to a military post in western Rajasthan state where he distributed sweets among troops and took a tank ride.

“You may be on snow-capped mountains or in deserts, but my Diwali is complete only when I celebrate with you,” Modi said in his address to the troops. 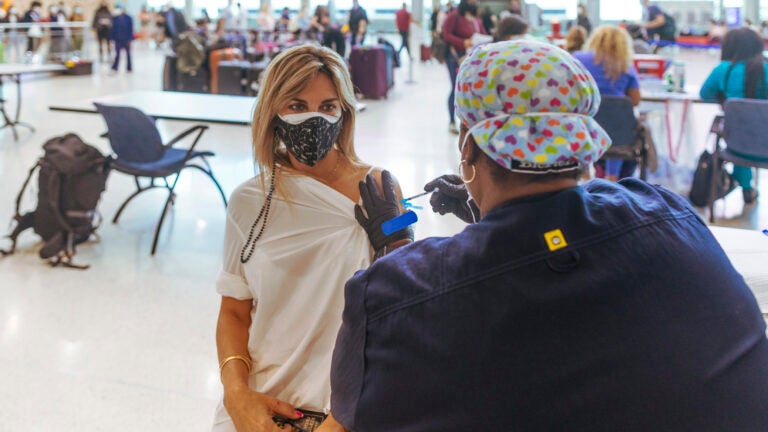 The Delta variant is spreading. Will you have to wear a mask again?