The front page of The New York Times on Monday displayed a photo that captured the deadly toll of Russia’s war on Ukrainian civilians: a family of four splayed out on the ground, victims in a Russian mortar attack.

The mother and her two children were killed, while Ukrainian soldiers tried to save the wounded father.

The image of the Sunday attack in Irpin, Ukraine, was captured by New York Times photojournalist Lynsey Addario, who has been documenting the Russian invasion since it began.

Addario has been sharing her experience in the moments before and after she witnessed the mortar hit the family, who, laden with backpacks and suitcases, were fleeing over the Irpin River to Kyiv when they were attacked.

She told Times Radio on Tuesday that she and a team with The New York Times — including a security adviser and freelance journalist Andriy Dubchak, who filmed the scene — were standing behind a cement wall for cover, trying to gauge what was happening in the area when the mortar rounds began coming in.

At first, she said the rounds were falling about 200 meters away.

Addario told the radio program she assumed the Russians were targeting the position of the Ukrainian military in the distance.

“They literally started bracketing closer and closer to where the civilians were,” she said. “And that mortar landed 20 meters from us. We were very very lucky. We were in a sort of cement box, so we hit the ground immediately.”

The hit left the mother and her two children dead.

The photographer told CBS News that it was clear the area being targeted was full of civilians, that “everyone,” including the Russians, knew there were fleeing refugees in the area.

Addario said she is a mother herself, and when working, she tries to stay focused, keeping her camera to her eye “so I don’t think too much.”

But she said the moments after the mortar hit were “very emotional.”

“I had just been sprayed with gravel from a mortar round that could have killed us very easily,” she said. “So I was shaken up. And when we were told that we could run across the street by our security adviser, I ran and I saw this family splayed out. And I saw these little moon boots and puffy coat, and I just thought of my own children, of course. And I thought, ‘It’s disrespectful to take a photo, but I have to take a photo. This is a war crime.’”

Addario said it’s important that people around the world see images like the one she took of the fallen family, calling it a “historically important image.”

The photojournalist told Times Radio that civilians and journalists alike are increasingly coming under fire by the Russians in Ukraine.

“In other wars I’ve covered there has been some sort of respect for the international journalists, we are there to bear witness to what’s going on,” she said. “And that is just not the case. We have to put ‘media,’ we have to put ‘press’ [on flak jackets] in a sense because we hope that it provides us with some sort of cover, some sort of protection. We have to cover this. There are civilians deliberately being targeted.”

Despite the dangers, Addario said Ukranians in Kyiv are determined and resilient in the fight for their country.

“We went to a position that was about 2 kilometers back from the bridge where we had been this morning because the fighting had intensified at the bridge already this afternoon and it was impossible to get back there,” she said. “But there were ambulances and just emergency workers going back and forth, literally under shelling to take civilians and bring them out to safety. I mean, people are incredible. They’re brave, and they are determined. And the morale seems like they just want to defend their country.” 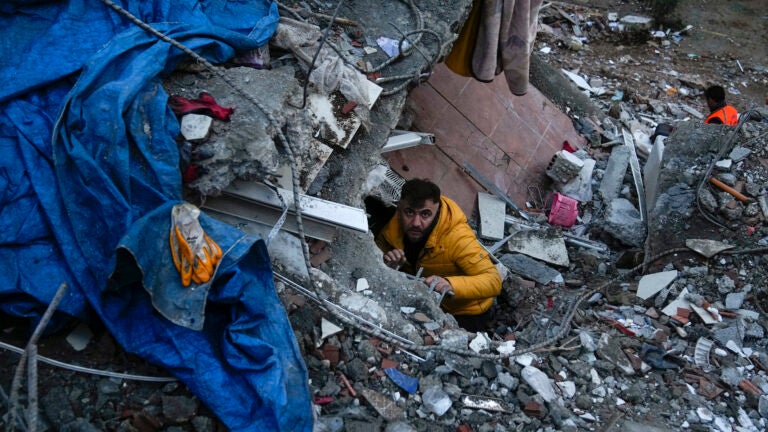