For 17 years, Zeb Hogan, a biologist, has been searching for the world’s largest freshwater fish. On June 13, his team found it — a giant freshwater stingray, or Urogymnus polylepis.

The ray, hauled out of the murky waters of the Mekong River in Cambodia, measured 13 feet in length before it was returned to the river. And at 661 pounds, it was 15 pounds heavier than a Mekong giant catfish caught in Thailand in 2005. Hogan said he had previously established that freshwater fish as the largest ever caught.

While this species of giant stingray has an extremely dangerous venomous barb that can reach nearly 1 foot in length, they are not usually a threat to humans. More often, they wind up in the market as a source of cheap protein.

Fishers in Cambodia first alerted Hogan and his team at Wonders of the Mekong Project, which works to protect the Southeast Asian river’s aquatic diversity and is sponsored by the U.S. Agency for International Development, that they had caught a stingray larger than anyone had ever seen. Team members rushed to the small river island, called Koh Preah, and lined up three industrial scales. Using a tarp, they hoisted the stingray out of the water and onto the scales to verify its weight.

The discovery comes less than a month after another giant stingray — that one weighing 400 pounds — was caught and released nearby. Two other enormous rays have also been caught this year.

“The fact that the world’s largest freshwater fish was caught in the Mekong is remarkable,” Hogan said. “This is a heavily populated region, and the river faces a ton of challenges, including lots of fishing.”

In another first, Hogan’s team was able to fit the stingray with an acoustic tag to track the animal for up to one year with an array of 36 underwater receivers that were also recently installed in a stretch of the river.

“This is the first fish that we’ve tagged since having the array deployed,” said Hogan, who is also a research associate professor at the University of Nevada, Reno. In the months ahead, they plan to tag hundreds of additional fishes.

With so many giant stingrays caught in recent months and all of them female, Hogan believes this stretch of the river and the deep pools it contains are a critical breeding ground for the species. The area is also home to freshwater dolphins, giant soft-shell turtles, giant catfish and giant barb, which is in the carp family.

While breaking the world record was not scientifically important, Hogan said that the existence of this fish is an indicator for the health of its ecosystem. He also hoped the discovery reminds the local community how special this river is and how much it’s in need of saving.

Because of a combination of factors, including dam construction, overfishing and climate change, big freshwater fish populations are generally in decline. And many species of big fish are in danger of disappearing forever.

“In 2020, one of the contenders for the world’s largest freshwater fish, known as the Chinese paddlefish, was declared extinct,” Hogan said. “That was very sad news, and it had me feeling like we were going to see more extinctions of these big fish, rather than records being broken.”

Fortunately, the giant stingrays are not the only giant fish stories of late. In 2021, a record-setting 240-pound lake sturgeon was caught and released in the Detroit River. And in May, a nearly 300-pound alligator gar may have broken the Texas state record for the freshwater fish, though the angler chose to release the animal rather than kill it and bring it in to be weighed.

“When you hear stories about record fish, that’s a good sign,” Hogan said. 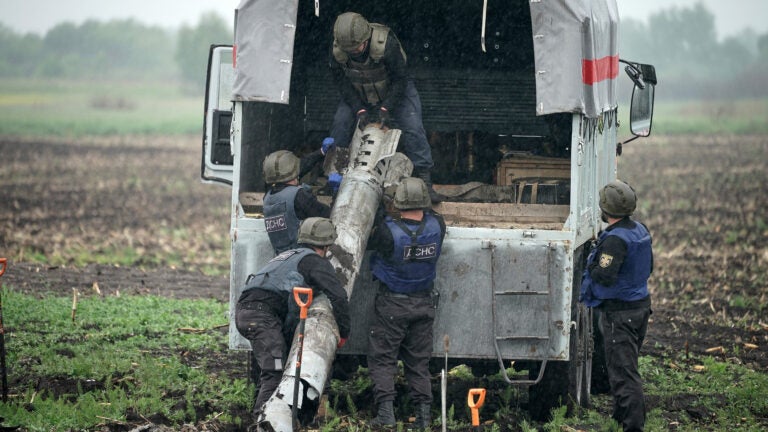 What are ‘artillery rockets,’ and why is the U.S. sending them to Ukraine?