Ukrainian officials confirmed Friday that Liza was among 23 people killed in a Russian strike Thursday that left her mother in critical condition, as social media images of their lives and the girl’s final moments captured global attention and punched through the too-familiar drumbeat of daily violence in Moscow’s nearly five-month war.

Dmytriyeva and her daughter had an appointment that morning with a speech therapist who had taught Liza, who had Down syndrome, how to pronounce her first words. Soon after Dmytriyeva posted the video on Instagram, a volley of Russian missiles struck the heart of the city, hitting a shopping mall, a dance studio and a center for children with neurological disabilities.

Photos shared online by Ukraine’s State Emergency Service and verified by The New York Times appeared to show Liza’s lifeless body next to the overturned stroller, which was spattered with blood.

A spokesperson for the Security Service of Ukraine in Vinnytsia, Denys Zakabluk, confirmed that Liza had died.

As Dmytriyeva recovered in a hospital — among the 80 people who were treated for injuries in the attack, Ukrainian officials said — her story and the bond with her daughter, painstakingly chronicled on her Instagram account, served as searing reminders of the toll that indiscriminate Russian attacks are exacting on Ukrainian civilians.

Dmytriyeva’s Instagram feed was a running testament to her love for Liza, traced through posts depicting milestones, struggles and words of encouragement for other parents.

“You must educate yourself. The more resources parents have, the more the child receives,” she wrote in a post the day before the attack. “Make your own dreams come true!”

Dmytriyeva moved with Liza from the capital, Kyiv, to Vinnytsia earlier this year, and signed her up for speech therapy classes at a center called Logoclub. Always smiling, Liza earned the nickname “Sunny Flower” at the center, said her therapist, Alyona Korol.

As news of the Russian attack reverberated worldwide Thursday, Korol said she noticed a familiar pair of green sneakers in photos from the scene.

“When I saw those shoes, I recognized them,” Korol said. “I knew it was our Liza.”

Images of the sneakers and stroller, which started circulating on social media in the hours after the attack, were held up by Ukraine’s leaders as an example of Russia’s disregard for civilian lives.

Ukraine’s first lady, Olena Zelenska, said in a Twitter post Friday that she recognized Liza from a Christmas video she had filmed with children in 2021. “The little girl managed to paint with dye not only herself, her dress, but also all the other children, me, the cameramen and the director just in half an hour,” she wrote, sharing the video. “Look at her, alive, please.”

President Volodymyr Zelenskyy said in his evening address, “The child was 4 years old!” and accused Russia of a litany of atrocities.

“No other state in the world allows itself to destroy peaceful cities and ordinary human life with cruise missiles and rocket artillery every day,” he said.

Russia has claimed that it only strikes locations of military value — even though some, like Vinnytsia, are hundreds of miles from the front lines in eastern and southern Ukraine. In a statement Friday, Russia’s Defense Ministry said it had targeted an office building in Vinnytsia where members of the Ukrainian armed forces were meeting with “representatives of foreign armament suppliers,” adding that the attack resulted in the “elimination of the conference participants.” Its account could not be verified.

On Friday, people placed flowers and a teddy bear at the site where Liza was killed. An outpouring of grief filled social media. A support group that helps connect families of children with Down syndrome posted updates on Dmytriyeva’s condition on Facebook and a link to a fundraiser for the family.

“Today, our hearts are bleeding and our eyes are full of tears, because our multithousand family has lost one of ‘its own’,” the post read. “They just found themselves in the wrong place at the wrong time.” 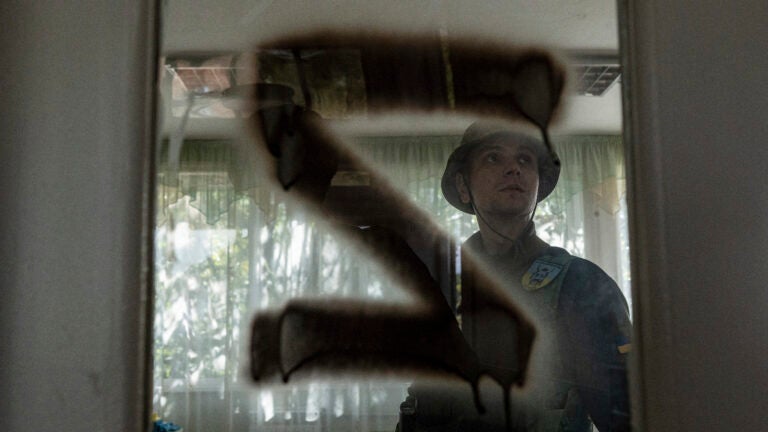