The 22-year-old woman emerged from the Tehran subway, her dark hair covered with a black headscarf and the lines of her body obscured by loose clothing, when the capital city’s Guidance Patrol spotted her. They were members of Iran’s notorious morality police, enforcers of the conservative Islamic dress and behavior rules that have governed daily life for Iranians since the 1979 revolution, and newly energized under a hard-line president who took office last year.

By their standards, Mahsa Amini was improperly dressed, which could mean something as simple as a wisp of hair protruding from her headscarf. They put her in a van and drove her away to a detention center, where she was to undergo reeducation. Three days later, on Sept. 16, she was dead.

Now, over eight days of rage, exhilaration and street battles, the most significant outpouring of anger with the ruling system in more than a decade, her name is everywhere. Iranian protesters in dozens of cities have chanted “women, life and freedom” and “death to the dictator,” rejecting the Iranian Republic’s theocratic rule by targeting one of its most fundamental and divisive symbols — the ailing supreme leader, Ayatollah Ali Khamenei.

In several of the videos of the uprising that have torn across social media, women rip off their headscarves and burn them in street bonfires, including in deeply religious cities such as Qum and Mashhad. In one, a young woman atop a utility cabinet cuts off her hair in front of a crowd of roaring demonstrators. In another, young women dare to dance bareheaded in front of the riot police.

“Death to the dictator,” protesters at Tehran University chanted on Saturday. “Death to the headscarf! Until when must we tolerate such humiliation?”

Previous protests — over fraudulent elections in 2009, economic mismanagement in 2017 and fuel price hikes in 2019 — have been ruthlessly suppressed by Iran’s security forces, and this time may be no different. Yet, for the first time since the founding of the Iranian Republic, the current uprising has united rich Iranians descending from high-rise apartments in northern Tehran with struggling bazaar vendors in its working-class south, and Kurds, Turks and other ethnic minorities with members of the Fars majority.

The sheer diversity of the protesters reflects the breadth of Iranians’ grievances, analysts say, from a sickly economy and in-your-face corruption, to political repression and social restrictions — frustrations Iran’s government has repeatedly tried, and failed, to quash.

“The anger isn’t over just Mahsa’s death, but that she should have never been arrested in the first place,” said Shadi Sadr, a prominent human rights lawyer who has campaigned for Iranian women’s rights for two decades.

“Because they have nothing to lose,” she added, “they are standing up and saying, ‘Enough of this. I am willing to die to have a life worth living.’”

Information about the protests remains partial at best. Internet access continues to be disrupted or fully blocked, especially on widely used messaging apps such as WhatsApp and Instagram, making it difficult for Iranians to communicate with each other or to share updates on the unrest with the outside world.

But witnesses say the demonstrations, which spread to at least 80 cities on Saturday, are the most forceful, vitriolic and emboldened they can remember, far more intense than the previous tremors of unrest. Desperate to damage the powers-that-be before the inevitable crackdown, videos circulating on social media and shared with The New York Times show, protesters have set fire to security vehicles and assaulted members of Iran’s widely feared paramilitary forces, in some cases killing them.

The information that has leaked out, after many hours’ delay, also suggests an escalating crackdown. The authorities have moved to crush the demonstrations with violence, including live fire and tear gas. Dozens of people have died. The Committee to Protect Journalists said on Saturday that at least 17 journalists had been detained, including one of the first to report on Amini’s hospitalization, and arrests of activists are also mounting.

With Iran’s economy at a nadir and Khamenei in ill health, the government is likely to dig in rather than show any signs of weakness, analysts said. But violence will only buy time, they say, not long-term peace.

The regime’s top leaders have “always said, ‘We’re not going to make concessions, because if we make one small concession, we’ll have to make bigger concessions,’” said Mohamed Ali Kadivar, an Iranian-born sociologist at Boston College who studies protest movements in Iran and elsewhere. “Maybe they’ll push people off the street, but because people want change, repression is not going to stop this. Even with a crackdown, then they would just go home for a while and come back.”

Avenues for pushback have dwindled in recent years, leaving Iranians with only protest as a means of demanding change. Just how much their political freedoms had shrunk became clear last year, when the country’s leadership disqualified virtually all candidates except the supreme leader’s preferred candidate, the ultraconservative Ebrahim Raisi, from the presidential election. In the process, they degraded what had once been a forum for Iranians to debate political issues and choose their representatives, even if the candidates were always preselected from within the ruling apparatus.

Raisi opposed returning to the 2015 nuclear deal with the United States that had put limits on Iranian nuclear development in exchange for lifting sanctions and economic openness. His election, combined with the worsening economy, left Iranians who craved better opportunities, more social freedoms and closer ties with the rest of the world in despair.

“The reason the younger generation is taking this kind of risk is because they feel they have nothing to lose, they have no hope for the future,” said Ali Vaez, Iran director for the International Crisis Group, noting that protests are now a regular feature in Iran.

By continually blocking reforms, the country’s leadership has “created a situation where people no longer believe that the system is reformable,” he added. “I think people would be willing to tolerate a milder version of the Islamic Republic, but they’ve just entrenched their positions and have created this situation. It’s turned Iran into a tinderbox.”

The headscarf, known as the hijab, is an especially inflammatory issue: The law requiring women to wear loose robes and cover their hair in public has been a pillar of the ruling theocracy and a lightning rod for reform-minded Iranians for decades, drawing one of the first protests against the ayatollahs after the 1979 revolution from women who did not want to be forced to cover up.

During the tenure of Raisi’s predecessor, the reformist Hassan Rouhani, the morality police had been discouraged from enforcing Iran’s often draconian laws against women, particularly the requirement that they wear the hijab in public in the proper fashion, entirely covering their hair. That led to young women showing more hair, even in devoutly conservative cities such as Qum. Unmarried men and women were allowed to mingle in public in some places, while contemporary Western music thumped in Western-style cafes in upscale northern Tehran.

But the country’s conservative leadership saw the slippage in standards as a threat to the republic’s theocratic foundations. Raisi called in July for the conservative dress laws to be implemented “in full,” saying that “the enemies of Iran and Islam” were targeting the “religious foundations and values of the society,” the official news agency IRNA reported.

Over the summer, Iran’s morality police, which patrols public areas for infringements of Islamic rules, stepped up enforcement of hijab standards, and three coffee shops in central Qum were closed down for having bareheaded customers. In a video that was widely shared on Iranian social media in July, a mother threw herself in front of a van taking away her daughter for violating hijab rules and screamed, “My daughter is sick, I beg you not to take her.”

The backlash to Amini’s death has been so strong that religiously conservative Iranians have spoken up alongside liberal ones. On social media, women who wear the hijab by choice have started solidarity campaigns questioning the harsh enforcement of the laws, and a prominent religious leader has said the morality police were only driving young women away from religion. Even tightly controlled state media outlets have acknowledged the issue, broadcasting at least three debates that featured reformist voices — a rarity.

The authorities have denied using violence on Amini. They claimed that she suffered from an underlying health condition, which her family has disputed, and that she had a heart attack in custody. But to many Iranians, photos of her lying on a hospital bed, her face bloodied, told a different story.

While Raisi has promised an investigation in a small nod to the fury, Iran’s response to the protests has been to give no quarter. It is the same as in previous uprisings: bullets, tear gas, arrests and blood.

In 2009, millions of urban, educated Iranians flooded the streets of cities across the country, furious at what they believed was election rigging by their leaders to guarantee a hard-line president and thwart reforms. The elite Revolutionary Guards and the Basij paramilitary forces opened fire, killing dozens and arresting far more, and eventually the “Green Movement” was stamped out.

As 2017 turned to 2018, protesters in dozens of cities demonstrated against high inflation and a weak economy. Again, they were met with force. In 2019, the government abruptly hiked gasoline prices, sparking weeklong protests by Iranians fed up with ever-thinning wallets, corruption and repression. The authorities killed at least 300 in the crackdown that followed, according to Amnesty International, and slowed the protests’ momentum by blocking or disrupting the internet.

The internet outages have now returned. To help Iranians access the internet, the Biden administration on Friday authorized technology companies to offer secure platforms and services inside Iran without risk of violating U.S. sanctions that normally prevent doing business with Iran. It also greenlit the export of private satellite internet equipment, such as the Starlink service offered by Elon Musk’s SpaceX, to Iran.

But Iranians may face odds that are too great.

“At some stage, I think it’ll become impossible for them to control these movements,” Vaez said of the ruling authorities. “But as of now, the system is bound to bring down its iron fist and try to nip this movement in the bud.” 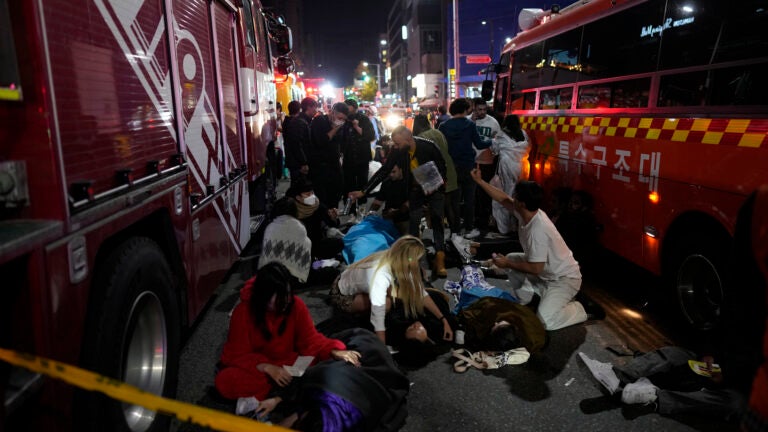