Drone and helicopter footage captured off the coast of South Africa provides what scientists say is the first direct proof that orcas are capable of hunting and killing one of the world’s largest sea predators: the great white shark.

A study published this week in the journal Ecology details a more than hour-long pursuit of a number of white sharks by a pod of killer whales off Mossel Bay, a harbor town in South Africa’s Western Cape province. At least two white sharks were killed over a 71-minute period in May, the researchers said.

“This behavior has never been witnessed in detail before, and certainly never from the air,” the study’s lead author, Alison Towner, a shark biologist at Marine Dynamics Academy in Gansbaai, South Africa, said in a statement.

The footage could help explain the disappearance of great white sharks off the coast of South Africa in recent years, a decline scientists and government officials had long suspected was due to killer whales, rather than illegal hunting or overfishing.

Orcas have been known to prey on other shark species, but evidence that they hunt great whites had been limited to examining the carcasses of dead sharks washed ashore for signs of attack.

A short drone clip of the attack was released in June. The new paper was published with more footage, as well as information from satellite tags, drone surveys and shark tour boats that suggest great white sharks fled the area around the time the killer whales began their pursuit. Only one great white was spotted in the 45 days after the attacks.

In one video filmed by an amateur drone pilot, a group of five killer whales swam toward an area known for the presence of white sharks. Two whales were clearly visible on the surface as a third emerged from the depths, pushing a white shark that appeared to be dead. The whale bit into the shark and a large pool of blood was spotted.

At about the same time, a helicopter pilot witnessed two sharks being killed by killer whales in the area. Short video clips and photos captured by the pilot appear to show the same group of killer whales from the drone video. Several appeared to show a shark liver floating on the surface, the researchers concluded, before being swallowed by a killer whale.

The footage may shed new light on the way white sharks try to evade orca attacks: staying within sight of their predator. That is a common strategy used by seals and tortoises to evade sharks, the researchers said. But that circling approach is probably ineffective for escaping orcas, which are social mammals and hunt in groups, cornering their prey, the scientists wrote.

Despite being known as killer whales, orcas are actually the largest member of the dolphin family. They were given the nickname by early sailors who observed them hunting in groups and preying on larger whale species. They have been known to feed on everything from fish, seals and sea lions to octopuses and sea birds.

“Killer whales are highly intelligent and social animals. Their group hunting methods make them incredibly effective predators,” said Simon Elwen, a marine mammal specialist at Stellenbosch University and a co-author of the study. 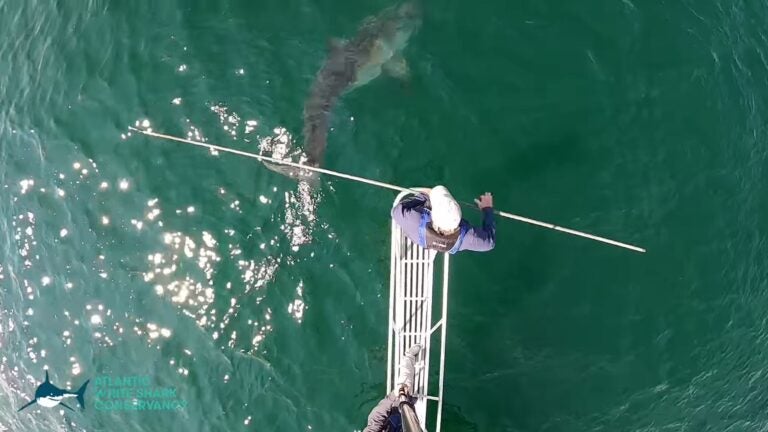