When your transit system is reliably unreliable, a monthlong subway shutdown and the prospect of more service interruptions are certain to bring demand and prices down at residential developments around T stations, right?

Safety issues at the Massachusetts Bay Transportation Authority forced the agency to shut the Orange Line down last month for 30 days to pursue an aggressive repair schedule. While the agency rebutted rumors the Red Line might be next, there have been nighttime closures of that subway line on the Braintree branch.

Convenient access to transit is often a top wish-list item for those on the hunt for an apartment or condo in Greater Boston, but it’s also a major factor when residential developers pursue projects. It’s also been a concern of Governor Charlie Baker. In August, however, the Baker administration pared back the multifamily zoning required of many communities along and around the MBTA system after smaller towns complained of a one-size-fits-all approach to interpreting a new housing law, the Globe’s Jon Chesto reported. With so much unreliability on the region’s subway network, it isn’t outside the realm of possibility to think housing demand would go elsewhere — especially after so many people moved beyond the urban core during the pandemic.

But housing and transit experts view the fixes as a long overdue investment that is only going to make housing close to the T an even hotter commodity.

“I’m in the camp that investors and developers will continue to focus on the long game. The 30-day shutdown of the Orange Line is expected to repair deferred maintenance and make that line more reliable,” said Aaron Jodka, director of research and US capital markets at Colliers. “Assuming that does take place and that is the end result, shouldn’t developers want to be on the Orange Line more tomorrow than they are today?”

The shutdown, slated to end Monday, entails completing five years of safety upgrades and construction work in 30 days. But in the meantime, it is severely lengthening the commute times for riders on a subway line that carried roughly 100,000 riders a day in May, according to the MBTA. Shuttle service has replaced subway rides during the shutdown.

The blow to reliable rail service in Boston comes after real estate’s renewed embrace of transit convenience. In the 1920s, 91 percent of apartment and condo development in Greater Boston took place within a 10-minute walk of a subway, streetcar, or commuter rail stop, according to data from real estate and transportation consulting firm Respoke LLC.

The rise of the personal automobile and US highway system tanked that number to 16 percent in the 1970s, but there has been a surge in transit-oriented development in recent decades. Private developers even partner with the public sector to enhance the MBTA network, from Boston Landing to Assembly Row to air rights projects over the Massachusetts Turnpike. So far in the 2020s, just under 60 percent of multifamily development in the region was within a 10-minute walk of a transit stop.

Despite the complaints about the commute time during the shutdown, there doesn’t appear to be any fear this is one subway failure too many. Greater Boston and its developers are pursuing various types of transit-oriented development.

“I think that the market is appreciative of these repair and maintenance and construction projects in the near-term because, if you look at investment dollars, they’re really focused on something that’s going to be turning in investment in the future,” said Brendan Carroll, president of Respoke. “It just delivers a better product and a better experience than exists today. It will be a more usable system, and I think it will have a positive impact in the not-too-distant future.”

This doesn’t mean everyone is embracing the Orange Line closure as something that will transform the MBTA network. This could be the latest nudge for people looking for an excuse to leave the city.

Concerns about safety and reliability in the near-term absolutely change the way people think about getting around the region, said Rick Dimino, president and CEO of A Better City, a group focused on growth under the lens of equity, sustainability, and improved transit.

Even on a good day, when trains don’t derail or catch on fire, people move away anyway, looking for more space and the luxury of having their own car. But not everyone has the luxury to work from their living room in the burbs. The life sciences building boom in the area requires in-person work.

“We have a very strong economic engine that settled into places where people have to go to work, such as our academic institutions, our hospitals, and our labs,” Dimino said.

That’s a catalyst for transit-oriented development.

It may be annoying today, but the Orange Line shutdown might make Boston a better place to live after decades of neglected repair.

“Will [the shutdown] ultimately affect the housing market?” Dimino wondered aloud. It doesn’t have to be a negative impact if the MBTA can better position itself over the next few years and put itself in a place where the transit agency shows its services are a safe, reliable, affordable way to traverse the region, he said.

“Transit will need to be an anchor and cornerstone of our future regarding equity, the economy, and climate and, therefore, will still be something that will have a relationship to housing decisions.” 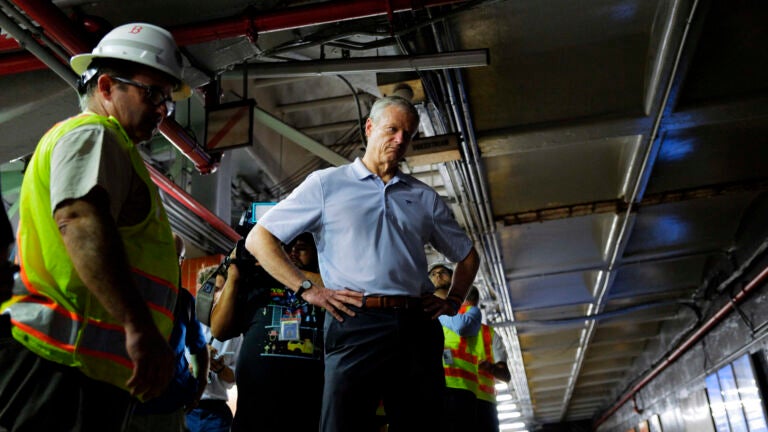