33 Aylesbury Road is a unique piece of mid-century architecture in Worcester.

Built in 1966, the home was designed by architect Irwin Regent. Listed at $1.1 million, the 5,472-square-foot home seems almost frozen in time, filled with fascinating design elements and every feature considered. The four-bedroom home, which could function as a five bedroom, has six bathrooms (4 full, 2 half).

Step inside the front door, and the first thing that catches your eye is the cascading green staircase sweeping upward. By the entry, you’ll find the elegant dining room, as well as four marble steps that lead up to the beautiful living room. There, massive windows and sliding doors stretch from the floor to the 16-foot ceilings and overlook the picturesque patio and yard, which almost feels like it envelops the house.

“They wanted the whole ‘let nature in’ theme going,” said Melissa Ellison, of Mathieu Newton Sotheby’s International Realty, who has the listing. “All the windows are amazing, all around the property.”

Also off the entry is the family room, a fascinating space filled with a wall of sliding glass doors, a wet bar, and a built-in entertainment system. With just a touch of a button, the entertainment center opens.

On the second level, you’ll find three bedrooms and two bathrooms. More stairs lead up to the primary suite, which has its own level. It’s filled with extensive built-in storage, including two walls of closets, cabinetry, and a custom shoe storage display.

There’s also a lower level to the home, which is accessible by a smaller staircase near the entry. It leads to a large office space, where wood-paneled walls and a sliding glass door make it resemble something straight out of Mad Men. There’s an additional guest suite on the main level.

Outside, the landscape feels private and picturesque, combining a flat, grassy yard under the canopy of mature trees set on one acre.

“It’s really funky all around,” Ellison said. “People have to see it to kind of really get the gist.” 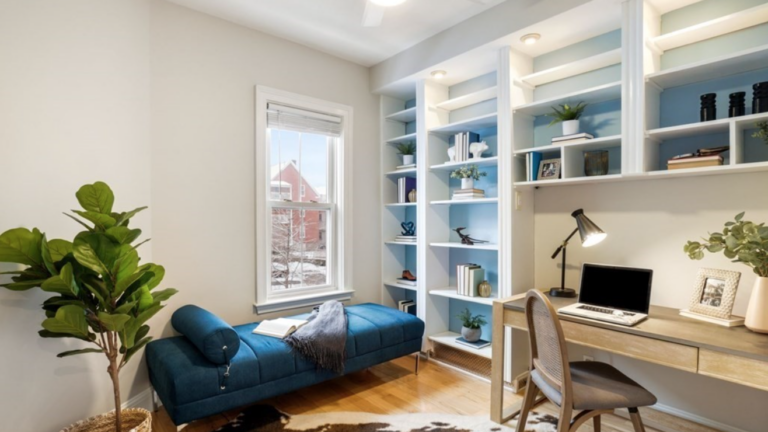 Listed: For $625k, a Jamaica Plain condo with the cutest home office