Sue Adams’s son was visiting in 2020 and pointed to the dangers around her.

“Your house has a lot of trip factors, and you tend to fall,” he said.

She knew he was right. An illness that had otherwise been treated successfully left her with balance issues, but her Gloucester home was never designed with trip hazards in mind. The 1.5-story frame house was built circa 1840, with a large kitchen ell dating to about 20 years later. The home had a traditional layout, with separate living rooms on the first floor and a narrow, steep staircase leading to two bedrooms and a bath upstairs. A 1980s renovation by previous owners added a downstairs powder room, remodeled the kitchen, and put on a large deck adjoining the kitchen.

“I began to think about where I should live,” said Adams, a retired interior designer. “Divorced, with my son halfway around the world, I could be anywhere. But the more I thought about it and looked at other options, the more I realized that there is nowhere else I want to live.”

Her house is perched above Ipswich Bay in Lanesville, a village on the northeast corner of Cape Ann. Its westward-facing orientation makes for spectacular views of the sun setting over the water, a feature that spurred the 1980s deck addition.

Adams engaged Tim Thurman, president and designer at Rockport’s Treehouse Designs, with a list of the changes she wanted to make.

“I wanted an attached garage, a first-floor primary suite, and to eliminate all the trip factors,” she said.

Thurman drew up plans, which she took to Nicola Bach of Gloucester’s Bach Builders for execution.

“I had seen a lot of Treehouse’s designs over the years, and I like their aesthetic,” Adams said. “And, from working with her on past client projects, I learned that Nikki Bach communicates well. A lot of builders can swing a hammer, but she always kept me in the loop when it came to budget and scheduling expectations.”

Sue moved out of her house in September 2021 as the work began. Building an attached garage entailed taking space from the deck and reconfiguring the back of the house. A gentle ramp leads out of the new garage to a new back hall that includes a laundry, a powder room, and an entrance into the kitchen. While the layout of the kitchen remained, it underwent structural change.

“The floor was a mess,” Adams said. “It was so undulating that it could not be sanded, and it pitched towards the center from all sides. We took all the cabinets out, took up the floor, sistered the floor joists, and put down a new subfloor and hardwood flooring. The floor is now ¾-inch higher, and we made the counters higher, too, so that the proportions are the same.”

A side door leads directly outdoors from the kitchen; it is now buffered by a small vestibule.

“During the winter of 2015, snow blew right into the room as wind drove it in under the door. There is huge wind exposure here next to the water.”

New living and dining areas are part of the kitchen; construction added about 235 square feet to bring the size of the house to 1,200. What had been a front room became a new primary suite, complete with a spacious closet and a luxurious bath.

“I don’t want scatter rugs, so there is radiant heat under the bathroom floor,” Adams said. In similar safety-oriented fashion, the doorways are 36 inches wide; there are grab bars next to the toilets, showers, and the bathtub; and all sills have been eliminated.

“Comfort and safety guided all the decisions,” she said.

Last June, Adams moved back into her newly configured house.

“I loved the whole process. All those years of designing renovations for other people’s homes made me want to do it for myself,” she said. “This was my chance.”

She made use of the state’s Home Modification Loan Program, which provides interest-free loans of up to $50,000 for people with disabilities.

“But it was shocking how the pandemic and inflation doubled the cost and the time frame of everything,” she said. “For example, I got new upholstered living room chairs that normally would have arrived in four months. It took twelve months.”

Now that it is done, she is happiest with the light streaming into her kitchen/living/dining room.

“It brings the room to life,” she said. “And although I miss my big deck, I still have those gorgeous western views.

See more photos of the home below: 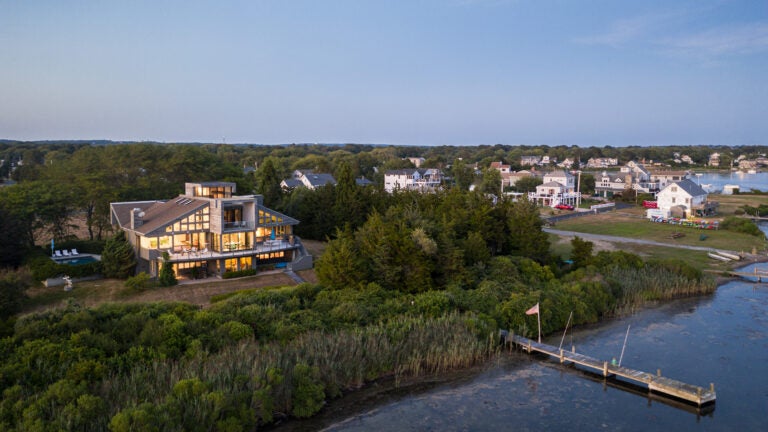 Luxury Home of the Week: For $11.25m, a waterfront contemporary in R.I. with an observatory