“I was on Redfin every day for a year before I saw this house,” Jake Cacciapaglia said about the severely rundown rowhouse in South Boston that his family of four now calls home. “That there were only three photos posted hinted that there was hidden value,” Cacciapaglia said.

His wife, Kathryn Yee, was skeptical because they had never remodeled a home. “I wanted nothing to do with it,” she said with a laugh. That said, once they ran the numbers, explored the neighborhood, and learned that the park across the street was slated for a new playground, she was on board.

The couple, who moved from Dorchester, hired Owen Thomas Architecture (otarchitect.com) to redesign the house, built in the late 1800s, with a modern bent that fit the neighborhood. Cacciapaglia acted as general contractor with his father, builder Stephen Cacciapaglia of S.C. Woodworks (mahomeremodeling.com). Yee oversaw every aspect of the interior. “Owen was a super-flexible partner in working with our strengths,” Cacciapaglia said.

By building atop an existing first-floor bump-out (originally a bathroom, now a sunny dining nook), Thomas increased the living space from 1,510 to 1,830 square feet without expanding the footprint. Altering the roofline also helped, turning what was an attic with sharply sloped ceilings into a fully usable third floor. “We created a shed dormer on the front that echoes the dormer of the house next to it, and raised the roof in the back to be almost flat,” the architect explained.

The couple envisioned minimalist spaces suffused with light. “An open plan and storage for boots and strollers are competing interests,” Thomas pointed out. Ultimately, the couple opted to push utility, such as the laundry, upstairs and storage to the unfinished basement. “I wanted the sightlines through the house to be clear when you walk in,” Yee said.

The front door opens into a tiny tiled foyer with hooks and a bench rather than a closet. Cascading greenery on the back patio, visible through the mostly glass back wall, pulls the eye through the house. Past the seating area, a white Caesarstone island anchors the kitchen with clean-lined but not overly modern cabinetry. The former bathroom bump-out, reconstructed with corner windows, is a dreamy dining nook.

An airy stair with a simple, black-painted wood rail leads to the second floor, where three bedrooms share a bath. Western afternoon light spills down the stair compliments of the interior glass wall of the third-floor flex space, which functions as a lounge, game room, and office. “Knowing that part of the house gets the golden-hour light, I wanted it to be a space that everyone could enjoy,” Yee said. The couple’s bedroom is behind it, and their bathroom door opens to the hall, easily accessible to all.

“We thought about every last square inch of this house, and it lives really well for us,” Cacciapaglia said.

Yee agreed, calling the setup effortless. “The irony is that this house I dismissed is now a home we love so much.” 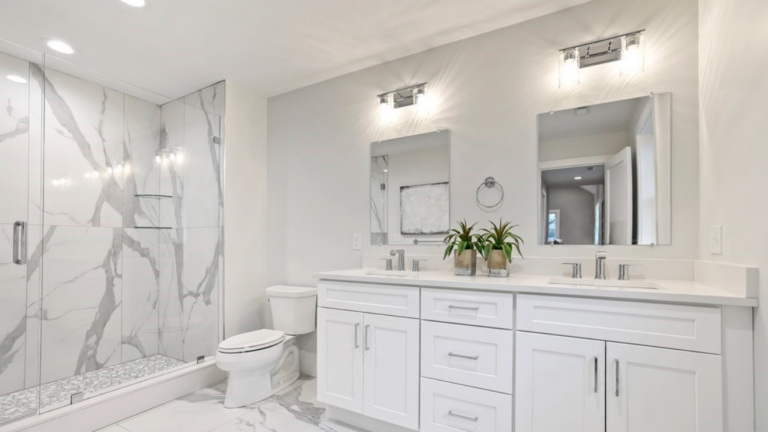 7 Boston listings with baths we wish we had