For some shoppers at Panache, a boutique in Saint Jo, Texas, it wouldn’t be Christmas without Post Malone.

A delicate blown-glass ornament that looks like the face-tattooed musician sold “like crazy” last year, said Ashlyn Shadden, 33, who runs the store with her mother. Buyers included many “women in their 60s,” she added. “I’m like, do you know who this is?”

Demand for the ornament has seemingly not ebbed: Shadden said that when she tried to get more for the store a few weeks ago, she was told the product was on back order until the end of December. (Online, the ornament is for sale at other retailers for around $25.)

Post Malone’s likeness, designed by Cody Foster & Co. in Valentine, Nebraska, is one of countless ornaments with no apparent relation to Christmas that can now be hung on a Christmas tree. Urban Outfitters sells a bitcoin ornament ($23). Bergdorf Goodman sells a Birkenstock sandals ornament ($30). Old World Christmas sells a tiny roll of toilet paper ($18), a popular ornament following the pandemic-driven shortage of the product. And this month, Taylor Swift released more than a dozen ornaments (from $15), any of which could make a good consolation gift for someone who couldn’t get their hands on tickets for her upcoming tour.

Many of the ornaments are made of glass with a method that was developed in Lauscha, Germany, in the 1850s and brought to the United States by dime store tycoon F.W. Woolworth around 1880. Using the traditional technique to create ornaments referencing modern culture imbues them with a certain irony, said decoupage artist John Derian, who carries blown-glass ornaments of all sorts at his namesake boutiques in New York and Provincetown. Among his favorites: a glittery disposable water bottle ($26).

“Everything about it was wrong,” Derian said, from its material to its size to the fact that it was designed to hang on a Christmas tree. “I couldn’t resist. I thought it was really funny.”

This year, Derian ordered about 15,800 ornaments — about one-third more than he did in 2021 — from vendors including Polish manufacturer Wiktoria-Morawski Ornaments and German maker Nostalgie-Christbaumschmuck. Although he sells ornaments that look like tins of Spam ($32), tubas ($15) and the One World Trade Center building in lower Manhattan ($36), he has yet to embrace those that reference memes or famous people.

American consumers’ spending on winter holidays including Christmas, Hanukkah, and Kwanzaa has grown, rising from about $567.6 billion in 2012 to about $889.3 billion in 2021, according to data from the National Retail Federation, a trade group. Among the 93% of Americans that celebrate Christmas, according to a 2019 Gallup Poll, a growing share focus on the Christian holiday’s nonreligious aspects, which include decorating trees.

Some ornaments, including a bowl of matzo ball soup ($16) and a menorah ($26), both made by Cody Foster & Co., seem particularly designed for broader appeal. Ben Weisman, 33, who is Jewish, received the menorah ornament as a present from his husband, Anthony Weisman, 36, a Protestant minister. For the couple, who live in Darien, Connecticut, shopping for ornaments has “become a way for us to come together around something that’s really important to Anthony for a faith reason, but is equally accessible for both of us,” said Ben Weisman, who works in finance.

“People are decorating in a more personal way,” said Cody Foster, who started his namesake décor company in 1999. He added that customers’ interest in his company’s kitschy ornaments took off during the coronavirus pandemic, when people were eager for cheery decorations. In 2018 and 2019, sales of its most popular style, a stick of butter ($16), totaled 20,000. Since 2020, sales of the ornament have totaled 90,000.

To produce his company’s glass ornaments, Foster works with a manufacturer in China that he declined to name. Cody Foster & Co. distributes its products to more than 6,000 retailers, including Paper Source and Nordstrom, which offer them at various prices. In 2013, Anthropologie and West Elm removed the company’s products from stores following allegations of design piracy. “It was a good learning experience for me,” Foster said. “Let’s try to not follow the trends, but as best we can try to start the trend.”

At Old World Christmas in Spokane, Washington, making new glass ornaments that reference a cultural moment — a Wordle grid ($25), a mitten-wearing Bernie Sanders sitting cross-legged ($28) — can take as long as a year.

Neal Applefeld, the company’s president and CEO, said the process begins with brainstorming sessions in January and February, after which potential new styles are sketched. Manufacturing takes place at factories in China and Vietnam, where renderings are used to create handcarved clay molds and then steel molds, into which glass is blown. A silvering solution is poured into cooled glass ornaments to make them reflective, and they are then painted and decorated with glitter by hand.

Get the latest on buying, selling, renting, home design, and more.

Topical ornaments such as Old World Christmas’ toilet paper roll can have a time-capsule quality, said Jessica Fitzsimons, 38. She bought the company’s hand sanitizer ($22) and masked Santa ($28) ornaments in the first year of the pandemic. “It just felt like a way to laugh at it,” said Fitzsimons, who lives in the New York City borough of Brooklyn and works for a beauty brand.

Old World Christmas, founded in 1979, introduces about 150 new designs each year at the Atlanta Market and Las Vegas Market trade shows. The company distributes its ornaments to more than 3,000 retailers, including Urban Outfitters and Anthropologie; it also sells them online and at an outlet store in Spokane. In more recent years, Applefeld said, of-the-moment styles such as its Wordle and Bernie Sanders ornaments were “outperforming the more classic designs.”

The same is true at Panache, where Shadden said Cody Foster & Co.’s ornament that looks like a syringe of Botox ($22) had been especially popular this year. The store’s more traditional décor, she added, is “usually what we’re left with at the end of the year to mark on sale.” 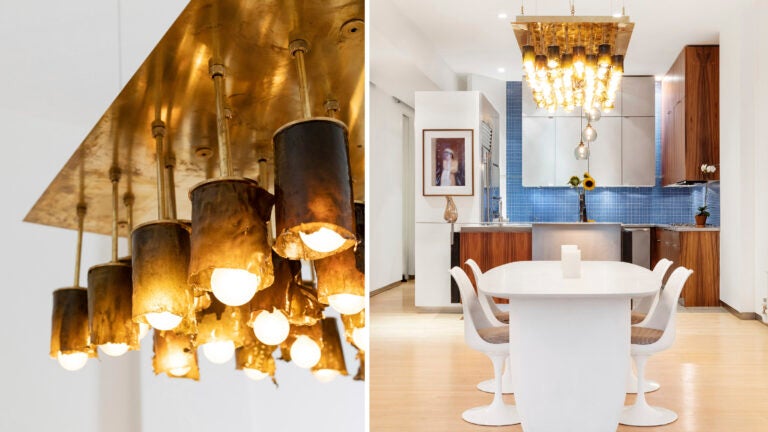